A friend of mine is suffering from excruciating anticipatory pain. He’s heading to New York to attend his daughter’s graduation, which should be a glorious moment in life. But her commencement speaker is Fed Chair Janet Yellen. “Gotta find some thorazine to take before the ceremony,” he muttered. He paid for his daughter’s education. Not many students are that lucky.

Student loan balances soared 362% to $1.1 trillion since 2003, during a period when mortgage debt – including the effects of the current Housing Bubble 2 – rose “only” 65% to $8.2 trillion and credit card debt actually declined by 4.2% to $660 billion (chart). The burden of servicing that increasing pile of student loans is eating into other forms of borrowing and spending, such as the American classic, reckless consumption on credit cards, or the purchase of a home. And so the proportion of first-time buyers – the single most important sign of a healthy housing market – has been shrinking for years.

Recent graduates are facing a job situation that remains tough. The employment-population ratio for 25-34 year olds (chart) is on a similarly terrible trajectory as the EP ratio for the overall working-age population: It declined sharply from the employment peak in 2001 when 81.5% of the people in that age group were working. The ratio dipped below 78% in 2003, recovered a little, only to plunge in 2008, finally dropping below 74% in 2010. Since 2012, it has been recovering in fits and starts to a recent high of 76% earlier this year, only to drop again more recently. Like other Americans, this age group is having trouble finding jobs.

Over 70% of the students who are sitting through a commencement speech this spring have student loans. They will start their career, if any, with an average student loan balance of $33,000. Even when adjusted for inflation, it’s about twice as much as 20 years ago. Back then, only 43% of students graduated with student loans. After decades of red-hot tuition and fee increases, working your way through college in four years, the way I and many others did back in the day, has become a pipedream.

Every year, it gets worse. The Class of 2012 was the most indebted ever. Then the Class of 2013 took over that dubious honor, only to be trumped by the Class of 2014. Next year, the honor will go to the Class of 2015. Among the reasons for this fiasco: the way colleges are paid liberates them from both free-market and governmental constraints. They can charge whatever they want and get away with it because students can just go ahead and borrow it. Even noisy student protests with mass arrests trip up administrators only briefly. And through the student loan programs, designed with whatever intentions, the government is simply aiding and abetting colleges in extracting ever more money from the future lives of their students.

The equation might not have gone so horribly awry if each class of graduates had seen their incomes skyrocket in line with their student debt. But that’s a crummy joke. Between 2005 and 2012 – the last year for which this data set is available – the inflation-adjusted average student loan balance of graduates under 30 years old has soared 35% while the median annual income adjusted for inflation for college graduates between 25 and 34 years old has declined by 2.2%. And this is what this torturous condition looks like: 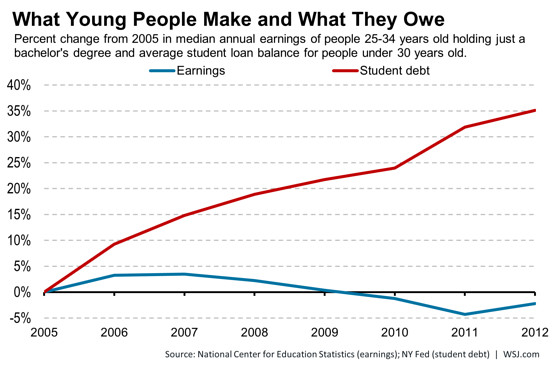 Something has to give. Sure, whittling down real incomes via inflation – among the goals of the inflation mongers at the Fed, the IMF, and elsewhere – reduces the labor costs of employers and makes the US more competitive with Bangladesh. Not raising the minimum wage in line with inflation is based on the same principle. And surely, providing workers only minimum food, some rags to wear, and basic shelter, instead of paying them actual wages, would do an even better job at it.

But this strategy has a drawback. These graduates will soon enter the generation of potential first-time home buyers. Today’s first-time buyers graduated a few years ago. For them, dealing with their student-loan burden isn’t nearly as much of a drag on their spending power. And they’re already staying away from the housing market.

The Class of 2014, including some of those who dozed through Yellen’s commencement speech, will be suffocating under their record-setting student loans that they have to pay for with their skimpy wages – the lucky one who find jobs that pay enough to make any payments at all. This is the future generation of first-time home buyers. And on top of their mountain of student loans, they’re facing higher interest rates and the inflated prices of Housing Bubble 2, if it can be kept inflated long enough, which appears unlikely, given the deteriorating condition of the crux of the housing market, these suffocating first-time buyers.