After five years under the Fed’s relentless money-printing and zero-interest-rate regime, the US labor force participation rate has shriveled to 62.8%. You have to go back to February 1978 to see worse. It’s a terrible indictment of the Fed’s policies that kicked in during the Greenspan Fed at the real wage and employment peak in 2000.

This long-term structural decline has befuddled the Fed, at least publically. Various economists and Fed heads have come up with all sorts of hairy excuses for this phenomenon, including demographics – that somehow suddenly changed in 2000? Yet they never once questioned their scorched-earth monetary policy.

As if to needle the Fed’s spin-meisters personally, the labor force participation rate of another developed country, New Zealand, just set a record high.

OK, I have a lot of fond memories of New Zealand, one of which is what a driver there told us tourists, “In New Zealand, there are more sheep than people, except during the summer, when there are more tourists than sheep.” So it’s not exactly a huge economy.

And it has its own challenges, but over the last 12 months, it created 84,000 jobs, the most since the data series began in 1986. Unemployment is 6%, but it’s only this high because the underlying labor participation rate is doing something that America can only dream of: it jumped from an already high 68.9% in the fourth quarter to an all-time high of 69.3% (chart via Merk Investments). 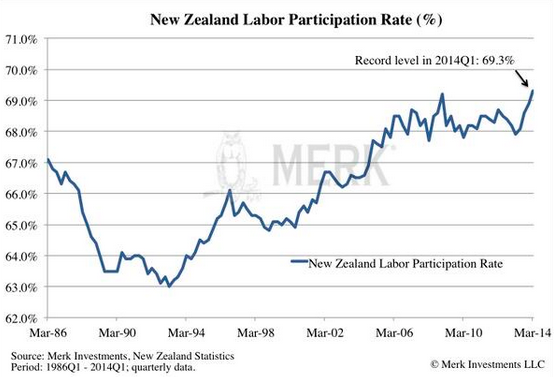 Note that the Reserve Bank of New Zealand pushed its benchmark interest rate down to a record low of – drumroll – 2.5%, which sounds like paradise to devastated American savers whose wealth and income have been transferred to Wall Street for over half a decade via the Fed’s near 0% policy.

Hedge fund manager David Einhorn, in recounting his dinner with former Fed Chairman Ben Bernanke, shed some light on Bernanke’s motivation for ZIRP. Bernanke told him, “And my feeling has been that by having rates at zero for a very, very long time, the harm that we’re doing to savers outweighs the benefits that might be seen elsewhere in the economy.”

It was a cost-benefit analysis: Bernanke admitted that it harmed the savers (the quintessential little people), but that it was for the benefit of the borrowers, and sure, there are homeowners and consumers who borrow, but they never really benefited that much from those low rates (a 0% mortgage?). The biggest beneficiaries were the players on Wall Street, the banks, the hedge funds, the private equity firms that can borrow nearly unlimited amounts at super-low interest rates, even near 0% in the repo markets, and large corporations that can also borrow short-term near 0%. Those were the entities Ben summarized with “elsewhere in the economy.”

And it’s only when rates are this low for “a very, very long time,” that the destruction wreaked upon savers even enters into the equation. Bernanke made it worse when he added, according to Einhorn: “The reason is if you raise interest rates for savers, somebody has to pay that interest. So you don’t create any value in the economy because for every saver there has to be a borrower.”

But this year, the RBNZ raised its benchmark rate to 3.0% and indicated that it would raise rates further.

So, here is a chart of the labor force participation rate in the US, where the Fed has nothing but excuses for its monetary policy – or rather its wealth-transfer policy – that has enshrined the dominance of capital over labor, of Wall Street over savers, into central-bank religion. This is the result: 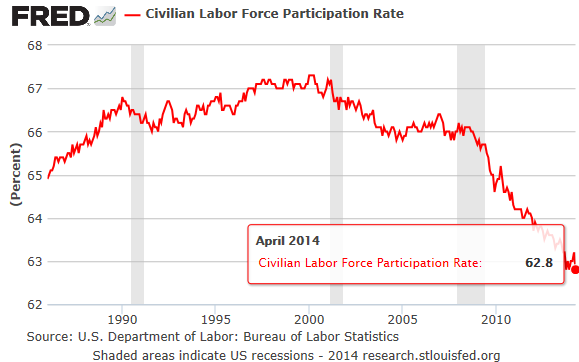 Despite the Fed’s excuses, New Zealand has shown that it doesn’t have to be that way; advanced economies don’t automatically and inevitably have to suffer a labor force participation rate that is sinking into permanent decline, and savers don’t have to be demolished to get there.