The Federal Reserve Board announced in its Senior Loan Officer Survey for the first quarter that banks experienced “stronger demand” for commercial loans, and that they “eased their lending policies.” They eased everything: premiums charged on riskier loans, loan covenants, collateralization requirements…. The primary reason for the lower underwriting standards was “more-aggressive competition from other banks or nonbank lenders.” Fewer banks cited a more favorable economic outlook. And then there was an “increased tolerance for risk.”

It shows. The bank-lending bubble before the financial crisis peaked in October 2008, with total credit outstanding at all commercial banks at $9.56 trillion. When it all fell off a cliff, some of it turned into toxic waste and was written off or shuffled to the Fed in a maddening series of bailouts. It hit bottom in February 2010. Since then, it has been rising. In November, it started soaring at a similar rate as in mid-2008, the time when all heck was breaking loose. And by April 23, total bank credit hit the lofty all-time record of $10.4 trillion: 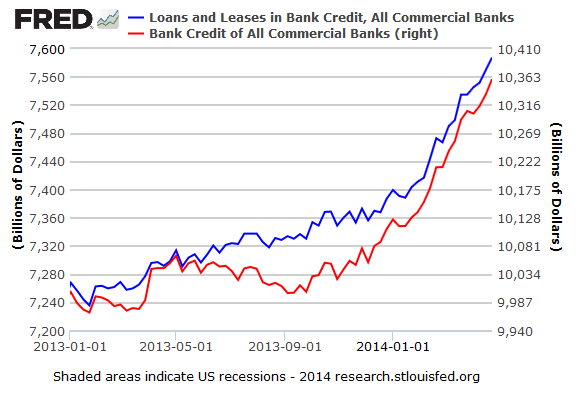 But much of this borrowed money isn’t making it into the real economy, into plant and equipment, inventories, etc. It’s siphoned off by M&A activities and other forms of financial engineering, or by Wall Street alchemists to create some sweet-smelling substances, once again.

Turns out, banks have a problem, and these alchemists are going to help solve it. Banks carry on their books $136 billion in triple-A rated Collateralized Loan Obligations, the Wall Street Journal reported. These CLOs are similar to the triple-A rated mortgage-backed Collateralized Debt Obligations that turned into toxic waste during the financial crisis. But unlike their subprime-mortgage-backed brethren, CLOs are backed by junk-rated corporate loans, some of them malodorous “leveraged loans.”

PE firms use leveraged loans as a device to suck cash out of their overleveraged portfolio companies. These companies borrow money that they then, instead of investing it in productive assets, pay out as a special dividend to their owners. The procedure leaves the company deeper in the hole, the PE firm loaded with new cash, and the bank with a “leveraged loan.” The bank can then package that loan with other low-rated corporate debt into an enticing CLO.

Total outstanding CLOs in the US amount to $300 billion, of which $136 billion languish on the books of banks. So far this year, $35 billion in CLOs have been created, just a notch behind the $36.5 billion created in the same period in 2007, on the eve of the great bank implosion. An additional $16 billion are in the pipeline.

New regulations, designed to keep banks from imploding again, force banks to sell some of these CLOs over the next few years. But that has been tough. The threat of these regulations alone has put downward pressure on prices.

Our heroes at these banks have come up with an ingenious solution: lend money to hedge funds so that they buy these CLOs from the banks. A number of banks, including RBC Capital Markets, Société Générale, and our local bank here, Wells Fargo, are doing just that. To make the deals more attractive, banks have lowered rates and lengthened the terms of the loans – in line with the looser underwriting standards that the Fed reported in its quarterly survey.

Some banks have offered to lend as much as nine times the amount that the buyer would invest in the CLO. The risk? Even a minor downdraft in the market, multiplied by leverage, can produce breath-taking losses for hedge funds and force them to put up more cash or other collateral or dump some of these securities back into the lap of the bank … and we’re right back to 2008, of forced selling into a suddenly illiquid market.

But there is an advantage: by lending hedge funds money to take these CLOs off their books, banks are hoping that they will create enough artificial demand to pump up prices, thus generating some paper profits, though banks would remain exposed to these CLOs via the loans. The advantage to hedge funds? If their collective buying does drive up prices even a little, their profits will be multiplied by leverage. At least until reality sets in.

These dizzying layers of leverage and risks, all based on junk-rated loans by already over-leveraged companies aren’t a problem, the Wall Street Journal tells us to soothe our tattered nerves. Because this time it’s different: “Overall, borrowed money is mostly being used to buy triple-A-rated CLOs, say bankers and investors. That contrasts with the run-up to the 2008 crisis, when huge sums were borrowed to finance bets on assets such as subprime mortgages….” Indeed, these mortgages had been sliced and diced and packaged into CDOs, whose infamous triple-A rating didn’t keep them from turning into toxic waste overnight.