For a while, rumor had it that banks weren’t lending, and that this was the reason the recovery has been so crummy and that businesses weren’t expanding and that jobs weren’t being created fast enough. There was no demand for loans, and banks were too tight with their lending standards. Or so the story went.

Turns out, banks have been lending. Not only that. They’ve been lending more than ever before. They have been lending even more than during the last credit bubble, when too many easy loans were made helter-skelter by loosey-goosey loan officers while the Fed’s spigot was wide open, which helped blow up the financial system. 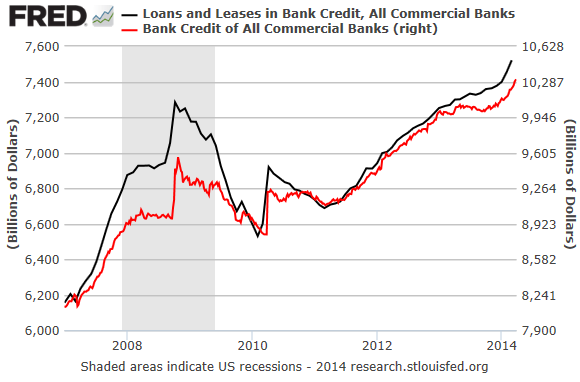 Note the beautiful big-fat bank credit bubble that emerged in 2002, picked up speed as it went, and took off in earnest in 2007, when the chart begins. And note how it soared exponentially in 2008. At the time, the banking system was coming apart at the seams, the housing market was tanking, Bear Stearns got cooked, and stocks were skidding. Nothing stopped the bank credit bubble. Nothing until Lehman Brothers went belly-up in September. Bank CEOs worried about being next. And that finally punctured it.

So the peak was reported in October 2008. Loans and leases outstanding at all commercial banks in the US (black line, left scale) hit $7.28 trillion and all bank credit (red line, right scale) maxed out at $9.56 trillion. Then the great cliff dive began, hitting bottom in February 2010 – outstanding loans and leases at $6.5 trillion, all bank credit at $8.9 trillion.

Now we’re back! Only this time, the bank credit bubble is even bigger. Last month, outstanding loans and leases reached $7.52 trillion and bank credit $10.3 trillion. Halleluiah!

But wait…. November last year, they started soaring. Because this is the biggest credit bubble in history, and it’s time to pick up speed, in a move that is reminiscent of the jump in mid-2008, even as all heck had already broken loose. 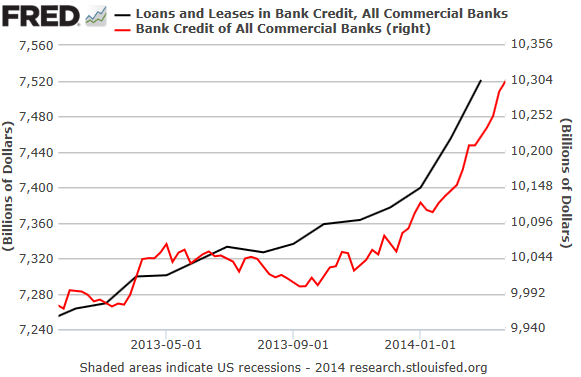 The underlying idea is simple – an idea that has morphed into a special sort of higher religion at the Fed that everyone has to believe in and that no one is allowed to question: the US economy can only grow if debt grows even faster. So total bank credit rose 3% in 2013, for example, and US gross national debt soared by $883 billion, or 5.4%. But GDP rose only 1.9%.

This is what a credit bubble looks like: piling on debt and more debt at all levels while producing only anemic economic growth, so that the debt burden, relative to the economy, gets more and more onerous, and only the Fed’s zero-interest-rate policy can keep the whole construct from collapsing under its own weight, which it will do anyway even with ZIRP, but later and only after even more debt has been piled on so that the damage will be even greater.

This is how the Fed envisions our debt-fueled economy where leveraging everything up to the hilt is the norm, where nearly free money is required at all times to keep the machinery from seizing up, and where inflation, the Fed’s preferred solution to this debacle, will ultimately eat into the wealth of all those who hold this debt.