What would have been a demented propagandist’s flight of fancy a decade ago has become reality: For the first time in history, the US imports more oil from our dear and reliable neighbor Canada than from OPEC. With major consequences.

Their combination has come out of OPEC’s hide. The chart, based on EIA data from January 1993 through January 2014, shows that imports from OPEC have been cut nearly in half from about 200 million barrels during the peak months of January and August 2008 to 102.7 million barrels in January 2014. During that time, US domestic oil production has jumped 49%. 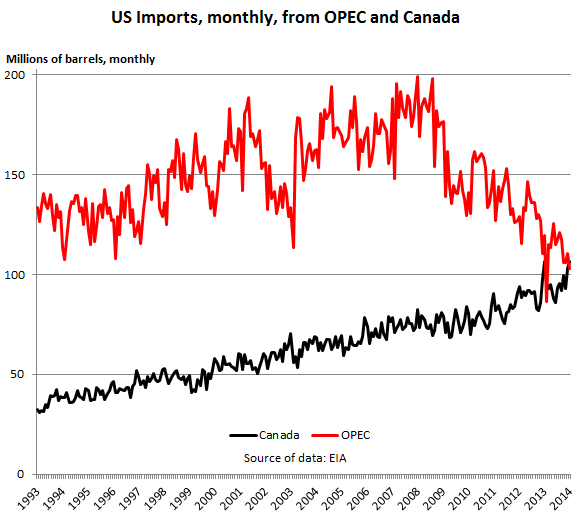 For those who remember the oil embargo in the 1970s, what it did to the price of gasoline at the pump, and how it sucked money out of your wallet faster than you could put it back in – a condition that persists today – and for those who always wondered why the heck Saudi Arabia was ever considered an ally of the US though it’s one of the worst dictatorships on the planet, this is a welcome development.

US independence from all crude oil imports? Not anytime soon. But North America as a whole – Mexico, US, and Canada – will likely increase production enough to where imports from OPEC become essentially irrelevant over the next few years.

Implications? You bet. For decades, oil has been the driver of US foreign policy in the Middle East. Horrific and costly wars were started for the general enrichment of US defense contractors and others as part of this oil policy. But soon, America should be able to simply shrug off any threats of extortion wafting over from Saudi Arabia, or from the countries around the Persian Gulf. As the Saudis and the Chinese become very unhappy bedfellows, America’s hypocritical Middle East policies – we bow reverentially before one dictator and bomb another – might become just a tad less hypocritical, though I’m not all that hopeful in that regard.