When the ECB tweeted on April 3 that its Governing Council had been “unanimous in its commitment to using also unconventional instruments within the mandate to cope with prolonged low inflation,” it was threatening in less than 140 characters to deploy the same voodoo economics practiced with such ravaging success by the Fed and the Bank of Japan. They’ve inflated asset bubbles and wreaked havoc in many areas of the real economy.

During the press conference, ECB President Mario Draghi was jabbering on about “low inflation,” archenemy number one in his bold fight to cut real wages. And that’s what the wealthy Mr. Draghi, other central bankers, and those they represent want: cutting real wages surreptitiously and gradually, so that workers wouldn’t notice and rebel. So he complained at the press conference, in public, for everyone to see, that with low inflation, cutting real wages was tough: “And you know that prices and wages have a certain nominal rigidity which makes these adjustments more complex,” he explained.

An honesty the Fed never dared to exhibit when it inflicted waves of QE on American workers.

And there was another drawback of low inflation, he said. It had “to do with the presence of a debt level, which, both for the private and public sectors, is still elevated. And with low inflation, the real value of this debt does not go down as fast as it would if inflation were higher, so it makes the adjustment of the debtors, the deleveraging, more difficult.”

He was pushing the creeping default by governments, banks, corporations, and other big debtors on their “still elevated” debts. And low inflation was getting in the way of this creeping default. That’s what he said. And this hilarious cartoon by Merk Investments (with permission) indicates the mechanism by which he’d handle this delicate situation, and how Chancellor Angela Merkel would listlessly play along: 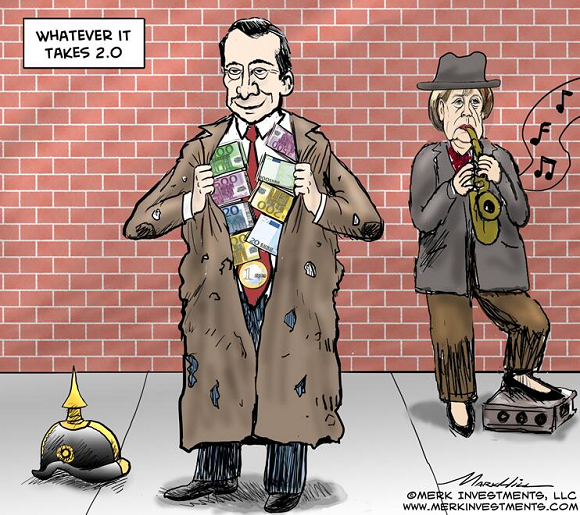 But why the sudden honesty? Especially since he even admitted that most of this low inflation was beneficial for the economy, noting that 70% of the reduction in inflation since 2012 was “due to lower energy prices and lower food prices.” That equates to a tax cut for the strung-out consumers.

Turns out, it wasn’t honesty that caused his diatribe. He was slamming the euro in his effort to verbally and singlehandedly devalue it faster than the Fed has been devaluing the dollar and the BoJ the yen. He was talking it down, practically massacring it. And right after the press conference, it actually dropped a smidgen to $1.36 only to shamelessly rise again a few days later to $1.39 before settling at $1.38 on Friday, higher than it had been before his euro bashing.

Draghi had once again pulled out his big bazooka and had shown it to the market. And after initially running scared, the market shrugged it off.

But what else could his threats of negative deposit rates and bouts of QE still accomplish? The goal would be to inflate asset values, but they have been inflating for years, and even the crappy bonds from periphery countries have soared and yields have plunged: Spain’s cost of borrowing is just as minuscule as the US’s cost of borrowing. The chart by Merk Investments shows that amazing trajectory. Five-year paper of both countries is now generating roughly the same ridiculously low yield: 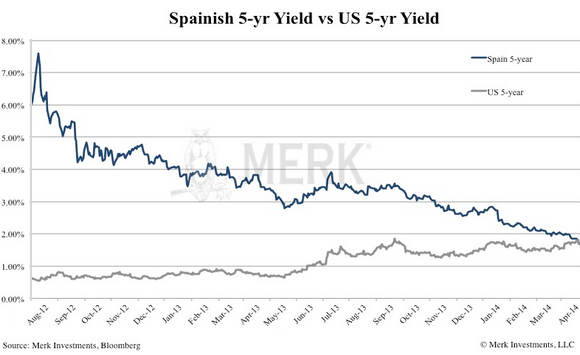 That’s what Draghi has accomplished with his “whatever it takes” threat – new bubbles in dodgy financial assets, record low borrowing costs for governments, financial repression for savers and bondholders, a real economy in the Eurozone that is just barely sputtering along, and a euro that now refuses to crash.

The countries that want a devaluation of the euro more vocally than any other are France and Italy. They have always solved their deficit and debt problems through regular devaluations. Now that they no longer control their own currency, they can only beg Germany and the ECB to relent, which has produced, among other crummy results, Draghi’s ineffectual verbiage.