The tiny country of Belgium – my beloved hunting grounds for three years a while back – with a GDP of $484 billion, a country which you can cross by bicycle in a single day if you’re really fit, a country that became famous to the chagrin of some people because it did just fine for a couple of years without a national government – well, that tiny speck of land is starting to grow an enormous mountain of US Treasury Securities.

In February, according to data just released by the US Treasury Department, it added $30.9 billion, taking its mountain of Treasuries to the phenomenal level of $341.2 billion, or about 70% of its GDP.

From August last year, when an already lofty $166.8 billion in Treasuries were held in Belgium, holdings have soared by 105%! Why this sudden jump? 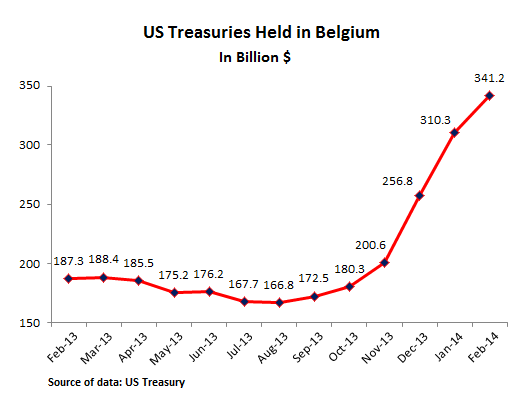 What the heck is going on in Belgium?

It has a vibrant export sector – right away, I can think of superb chocolates, addictive beers, and many other products. But have dollar-denominated sales multiplied umpteen times overnight in a miraculous fashion? Nope. Nothing happens quickly in Belgium. Getting even something minor through the bureaucracy, as we found out, requires superhuman patience, finely honed finesse, and a surprising amount of money. Nope, it couldn’t be anything having to do with Belgium’s real economy.

Leaves the other option: that Belgium has become a financial center for Treasuries owned by other countries, or that it at least has become a transit point for them.

So why Belgium? Mystery swirls around it for now. But there are some clues….

One of them is called Euroclear. It’s a big outfit. It holds €24.2 trillion ($33 trillion) in assets. Its clients include, as it says, over 2,000 global and local custodians, broker dealers, central banks, commercial and investment banks, investment managers, and supranational organizations in more than 90 countries. The total value of securities transactions it settles for them exceed €570 trillion per year. It proudly points out: “Every 6 days we settle transactions equivalent to the GDP of the EU.”

And it’s headquartered in Belgium. It could very well be that a government has used this mega-outfit to move its Treasury holdings away from the long muscular arm of the US. Indeed, Euroclear told the Financial Times that the volume of Treasuries it holds had “gone up dramatically” in recent months.

There is a suspect, so to speak. The Treasury’s ledger of Major Foreign Holders of Treasuries shows that Russia’s holdings were $126.2 billion at the end of February, down 23.5% from a year earlier. That’s quite a drop. Clearly, President Vladimir Putin has had it. Gradually and ever so carefully, he is diversifying Russia’s foreign exchange holdings. And occasionally, the Central Bank is selling some of them in an effort to prop up the ruble. But these movements belie the sudden and massive volatility of another ledger, the Federal Reserve’s Securities Held in Custody for Foreign Official and International Accounts.

As the US national debt ballooned by over $1 trillion per year, foreign countries were among the largest buyers. So the Fed’s leger of Foreign Official Accounts peaked at $3.02 trillion on December 18, having soared over 150% in just six years. But then it dropped week after week, and finally plunged by a record $104.5 billion during the week of March 5 to a recent low of $2.855 trillion – only to see some of those Treasuries reappear over the next few weeks, leaving behind a record trail of volatility. 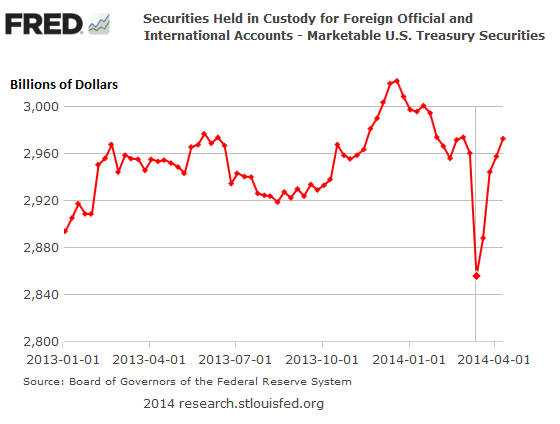 That mystery – a record pile of Treasuries suddenly disappearing and now reappearing – hasn’t been solved. In May, when we get the March data from the Treasury International Capital (TIC) System, we might learn more. All we know for now is that someone in panic-mode yanked a pile of Treasuries away from the Fed and transferred it to some other entity.

The entity could be Euroclear, which would then as custodian, and thus under its name, transfer some of them back to the Fed. Now that they’re no longer in Russia’s name, the US government would presumably have trouble freezing them as part of the sanction spiral unfolding over the Ukraine – couldn’t even credibly threaten to freeze them.

And it opens a broader issue: if otherwise inconvenient foreign holders of Treasuries, like Russia, get harassed by the US Government, or by Congress, what lesson will the Chinese learn from it? And what will they do?

Ha, they’re already doing it: the word dollar didn’t even come up when the Bundesbank signed the agreement with the People’s Bank of China. President Xi Jinping and Chancellor Angela Merkel looked on. It was serious business. Everyone knew what this was about. No one had to say it. Read….Dollar Hegemony Under Attack By Export-Superpowers Germany and China