Hidden in the IMF’s just released 188-page Global Financial and Stability Report is a doozie of a chart that screams not only “credit bubble” but also flashes a red warning sign: “seek cover, implosion in sight.” It depicts US issuance of covenant-lite loans and second-lien loans since 2001, including their phenomenal bubble that so spectacularly collapsed in 2008, and the even greater bubble currently underway – with an equally spectacular future.

Covenant-lite loans, which eliminate many of the protections that lenders normally require, allow over-leveraged junk-rated companies to pile on even more debt when they would normally no longer be able to do so. A key benefit for the Private Equity firms that own them: PE firms make a big part of their profit by having their portfolio companies borrow money, but not for expansion purposes or other productive uses. Instead, PE firms suck that cash out the back door through special dividends, fees, and other devices. When the portfolio company pops, the PE firm conveniently has the cash, and the lenders eat the loss.

To protect themselves, lenders normally force borrowers into covenants that prevent these and other shenanigans. But not anymore. Lenders, driven to near insanity by the Fed’s interest rate repression, are caught up in an all-out chase for yield and don’t look at anything else, and to get that minuscule extra yield, they take on risks, any risks, no questions asked, and to heck with future losses, and they hold their noses and close their eyes and pick up the worst crap, and then find ways of stuffing those risks into your mutual fund.

It’s a feeding frenzy out there.

The longer it goes on, and the more of this reeking debt with a high probability of default is piling up on the books of banks and other lenders, the more damaging the implosion will be. And so covenant-lite debt has become a flashing red light of a credit bubble in its final throes. A record $238 billion were issued in 2013, according to Thomson Reuters. Over 50% of the market, another hair-raising record.

The IMF chart shows the prior bubble as expressed in covenant-lite loans (green line, right scale) and second-lien loans (red line, left scale) and where it all ended so spectacularly – namely in the financial crisis. It also shows the current bubble through 2013. Covenant-lite loans started setting new records last year, but second-lien loans, a particularly nasty contraption for banks, haven’t quite caught up yet. Up to us to figure out where it ends: 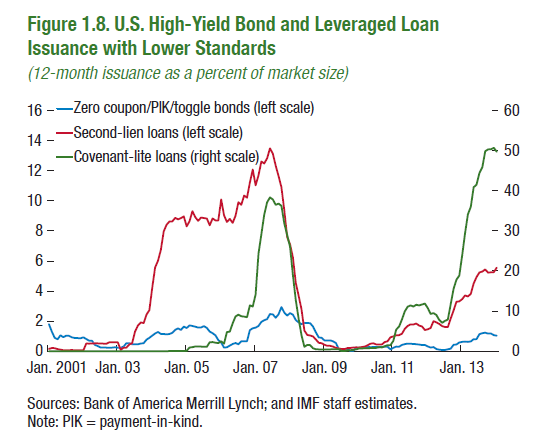 This year, it’s even worse.

Through March, about $68 billion in covenant-lite loans have been issued, according to Thomson Reuters. Banks are making even more concessions and relax loan terms further, giving over-leveraged companies enormous flexibility in how they deal with their debt if they run into trouble and allow them to pile on yet more debt. These new loosey-goosey loans have lovingly been dubbed, “covenant-lite 2.0.”

Banks are lapping it up. Classic covenant-lite debt, of the type that helped blow up the banks in 2008, have maintenance covenants to give lenders at least a modicum of protection in case of default. But one of the many newfangled features – increasing the “restricted payments baskets” – permits companies to channel more borrowed money via dividends and other devices back to the PE firms that own them. The cash is gone. The debt is still there. The loan-to-value ratio deteriorates and wreaks havoc on recovery in case of default.

Covenants are supposed to protect banks from those shenanigans – but aren’t anymore. Leverage ratios have been rising for a couple of years and now exceed those of the white-hot bubble market of 2007. But these hyper-leveraged companies won’t pop right away, not as long as new covenant lite loans allow them to borrow even more, and not as long as they can bamboozle desperate banks into lending more. Yet piling on more debt to deal with old debt merely pushes the day of reckoning into the future and increases the loss for the banks.

Even the Fed, which never sees signs of a bubble, and denies the very existence of bubbles until long after they have imploded, is seeing the ballooning covenant-lite loans as a risk to the very banks it had so heroically bailed out during the financial crisis, and Fed heads have mentioned them as an item on their worry list, and as a reason for eliminating QE.

In the IMF chart, second-lien loans (red line, left scale) also bubbled and collapsed beautifully. These loans are secured by a second lien over assets that have already been pledged as lien for other loans. In case of default, holders of first-lien loans have first claim to the assets. Holders of second-lien loans get whatever is left, which is mostly nothing. These second-lien loans, a particularly nasty contraption for banks, are jumping again. The skyward angle of the slope continues beyond the IMF chart: in January and February, $7.4 billion in second-lien loans were issued, up from $4.5 billion during the same period in 2013.

Defaults are unlikely as long as the Fed shoves nearly free money out the front door into the hands of even over-leveraged junk-rated companies that would otherwise have trouble servicing their existing debt. But the Fed is cutting back on QE and is generating a deafening cacophony about raising interest rates. Watch out for falling debris.