Margin debt is a crummy predictor of a stock market crash. But after it starts spiking, it has a bone-chilling habit of peaking right around the time stocks crash. In the last fifteen years, it spiked three times: during the final throes of the bubbles that started imploding in 2000 and 2007; and now. 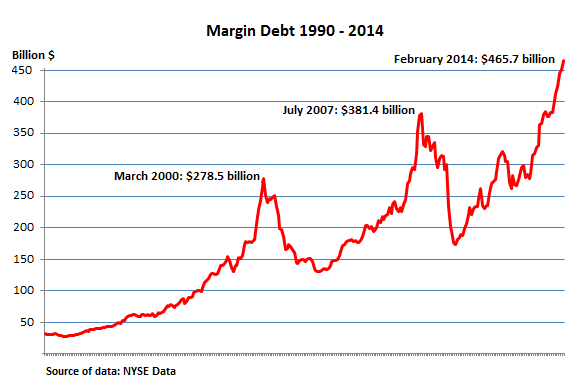 Are we there yet?

Margin debt started spiking again in September 2006 to peak in July 2007 at $381.4 billion, or 2.60% of GDP. The market maxed out in October. Then the fetid air started hissing out of it. As stocks swooned, brokers told their frazzled clients with suddenly too much margin debt to put more money into their accounts or sell their holdings – right now! Forced selling commenced. As margin debt was unwound by dumping whatever could be dumped at whatever price, the selloff turned into a plunge. After a few waves of it, hedge funds, leveraged to the gills and going deaf from the giant sucking sound of redemptions, were forced to sell too, which drove stocks down further and triggered more forced selling. When the dust settled, the S&P 500 had crashed 57%.

It didn’t take long for people to forget.

Margin debt began spiking again in August 2010 but didn’t make it very far. In April 2011, well below the prior records, it headed south as spooked investors fondled their sell buttons. But in August 2012, it started rising again, and this time, it turned into a phenomenal spike that set a new record in July 2013 and continued shooting toward the stars. In February, at $465.7 billion, margin debt hit 2.73% of GDP. The highest ratio ever!

Over that period, investors had borrowed an additional $188 billion from their brokers and bought stocks with it, which drove up stock prices further and encouraged even more borrowing. Margin debt: the great accelerator on the way up. And on the way down.

Is this the red line?

What we won’t know until afterwards is if February was an absolute peak, an interim peak, or just another stage on the way to a much more dazzling peak. Hence, it’s worthless as a predictor. But it’s an indicator of overall stock-market leverage and ballooning risks.

Margin debt, which is based on what brokers report to the NYSE, is only a fraction of total leverage in the stock market. Stocks can be leveraged in many ways. Large players borrow in the shadow banking system and buy stocks with the proceeds. Executives borrow from their company, with their shares as collateral. When the stock crashes, the exec walks away with the borrowed cash and the company gets to keep the crashed shares – an elegant mechanism that transfers the loss to the company (and to the rest of the stockholders) while the exec profits from any upside.

Corporations have issued record amounts of new debt to buy back their own shares. In the fourth quarter of 2013, share buybacks of S&P 500 companies soared 30.5% year over year to $129.4 billion; for the year, buybacks jumped 19.2% to $475.6 billion. Tech companies dominated the game with 26.7% of all buybacks. Like Apple and IBM, they issued bonds to fund those buybacks. Yup, buying stocks with borrowed money.

The quarterly record for buybacks was set in the third quarter of 2007 when S&P 500 companies shelled out $233.2 billion for their own shares, at the cusp of the epic crash. With these buybacks, banks ingeniously tried to prop up their shares as they were heading into the financial crisis, a strategy that accelerated their collapse.

Most of these banks got bailed out by the Fed, and in return the Fed prevented them afterwards from blowing their iffy capital on buying back their own shares. But eventually, it allowed some buybacks, and last week, it opened the door further. JPMorgan didn’t waste time before announcing it would increase its buyback program by an additional $6.5 billion. Other banks followed, doing the very thing that had accelerated their collapse during the financial crisis.

Stock-market leverage can take wondrous forms. For example, taking out home equity loans to plow that moolah into stocks. Who would recommend such a thing? Plenty of people. It ties the risk of stocks to the home, and when the market crashes, much of the money is gone, but the debt is still there. The fact this stuff worms its way into financial publications these crazy days of ours is a sign that leverage and stock hype are reaching into rarefied regions to scrape up the last borrowed dollar.

Adding up all the money people and institutions have borrowed to buy stocks remains elusive. But margin debt is one of the indicators. And that indicator is redlining.

Even the Fed, which hardly ever sees anything, has seen it.

Dallas Fed President Richard Fisher repeatedly warned about it. Other Fed heads nodded. Stock market leverage was exactly what the Fed wanted as part of its strategy to shove even retirees, after destroying their livelihood, out on the thin end of the risk limb so that they would fall off and break their necks. The Fed called it the “wealth effect.” But now, as risks and leverage have taken on hair-raising proportions, the Fed is worried that its policies have created the conditions for a third crash in fifteen years. Hence the taper and the cacophony over raising rates.