This winter, polar vortices blew across the land and sent the price of natural gas into dizzying spikes and plunges, head fakes, and whiplash-inducing turnarounds, and some traders timed it just right and made a buck. Now winter is petering out, and we’re left with a very peculiar situation.

Years of “shale gas revolution” that had turned into a crazy over-hyped no-holds-barred land-grab and fracking boom veered into overproduction that whacked the price, causing untold industry mayhem, billions in write-offs, and the collapse of a business model – drilling profitably for dry natural gas. But nothing can be priced below the cost of production forever.

The Energy Information Administration reported today that for the week ending March 21, natural gas in underground storage dropped by 57 billion cubic feet to 896 Bcf, down 50.8% from the five year average for that week, and down 44.6% from the five-year minimum. Or 12 days supply.

While NG production is fairly steady throughout the year, consumption jumps during heating season and also perks up in the summer when power generators are trying to supply enough juice for maxed-out air conditioners. After the heating season ends, inventories begin to build, hopefully to a level that will be enough to get us through the winter – hopefully, because this year, the equation seems iffy. 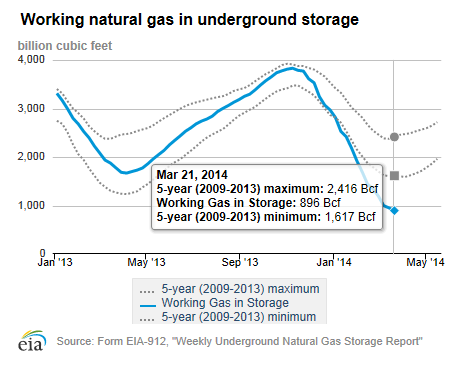 It isn’t just the weather.

In some parts of the country, we can use the weather to explain the low storage levels and price spikes this winter. But in the West, which includes my beloved State of California where the weather has been gorgeous most of the winter, storage levels dropped 44% below the five year average! It got so bad that the Independent System Operator issued a Flex Alert on February 6 for voluntary power conservation; Southern California Gas Company had issued “Emergency Curtailments” to several gas-fired power plants.

Old inefficient coal power plants are being retired around the country because they would be too costly to upgrade and operate under the new emission rules. Some nuclear power plants, including the leaky San Onofre plant in Southern California, have been retired. A multi-year drought has gripped the West Coast, and hydropower generation has been curtailed. Gas-fired power generation has to fill in the gaps.

Then there’s the new industrial miracle: with natural gas being far cheaper in the US than in the rest of the world, global companies with energy-intensive processes and chemical processes that use natural gas as feed stock have been building plants in the US to gain a competitive advantage through lower cost.

But fracking is a treadmill.

So drillers got off the treadmill. Rig count for NG wells dropped to 326 as of last Friday, down from 1,450 during the crazy days of 2007, down from 652 two years ago, down from 418 last year. It was the lowest rig count since 1995. OK, new drilling technologies, efficiencies, etc. etc. make up for part of it, but look at the results.

Production is declining in some shale formations and has flattened out in others. Overall, production in the US last year rose only 1.0% to 24,887 trillion cubic feet, while consumption rose 2.1% to 26,627 trillion cubic feet. This imbalance is likely to get worse this year; it has had a good start so far.

The largest, most productive shale formation, the Marcellus, is the big exception. Production jumped 40% from January to November last year. The glorious shale gas revolution has become a one-trick pony. During its heady days, thousands of wells had been drilled in the Marcellus, but there were few pipelines to take the gas to market, and perhaps 1,300 wells remained shut in. Last year, takeaway capacity caught up, and the gas started flowing to New York City and elsewhere – hence the sudden spike in “production.”

As of March 21, there were 78 active drilling rigs in the Marcellus, down from 89 rigs a year ago and from 141 rigs during the peak of the Marcellus drilling bubble in October 2011. Now that the gas is flowing, the steep decline rates are catching up with reduced drilling activity. Since December, production has barely budged.

And unless a miracle happens, such as a sudden drilling boom, we may have a peculiar situation this coming winter: a shortage.

Not that the US will run out; there are plenty of producing countries chomping at the bit to sell us LNG. We’d be competing with Japan and Korea, and they paid up to $18 per million Btu, instead of our current $4.50/mmBtu. Yet price is the solution. A substantially higher price will motivate drillers, and production will eventually catch up with demand. The current price – though up 134% from two years ago – isn’t nearly high enough. And the longer the price hangs out in this range, the more interesting the situation is going to be. This may turn into a seatbelt mandatory ride.

Now even the new boss of Shell Oil, already steeped in an Alaska offshore debacle, admitted that fracking in the US, after Shell’s huge investment, is a money-losing business. Read…. Shell Oil: US Fracking “Revolution” A Money Loser