Even the Fed is getting scared. The stock market has soared for five years – gains built on quicksand, a mix of endless liquidity and a lackluster economy. The sudden home price gains have been built on the same quicksand. Warren Buffett pointed out two years ago how it would work: “If I had a way of buying a couple hundred thousand single-family homes … I’d load up on them and I’d take mortgages out at very, very low rates.” Institutional investors gobbled up these homes, funded by the nearly free money from the Fed, driving up prices to where they’re no longer affordable for real home buyers – hence the sales down-down and disappearing first-time buyers [Without Them, The Housing ‘Recovery’ Remains A Sham].

So when the Fed handed its report on household wealth to the fawning media, it clarified what had happened last year: The value of household real estate jumped 11.7% to $22.0 trillion. And stocks held by households skyrocketed 34.6% to $13.9 trillion. And the net worth of households and non-profits (lumped ingeniously together) ballooned by $9.8 trillion, or 14%, to an all-time record of $80.7 trillion, “driven largely” by soaring stocks and home values. In an economy that barely budged.

OK, inflation makes this look less impressive. And as Lee Adler of the Wall Street Examiner explains, “if the net worth of the top 1% was lopped off, the picture would be far bleaker.”

But what the heck caused this phenomenal jump in net worth?

In the chart below, Lee plotted inflation-adjusted household wealth per capita (blue line), which still hasn’t hit its old record from before the financial crisis (his excellent deep plunge into it is here). But what the chart shows better than anything else is how household wealth soared in correlation with the Fed’s money-printing binge (based on holdings in the Fed’s System Open Market Account). That’s the red line. Note the delay: 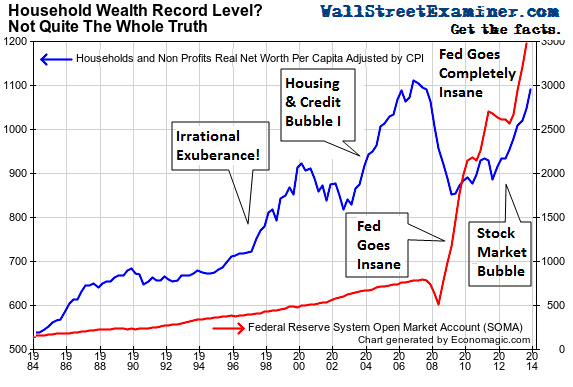 Prior to 2007, the Fed had steadily grown its holdings at the rate of about 4-5% per year. Household wealth grew at almost double that rate beginning in 1994, prompting Alan Greenspan to proclaim “irrational exuberance” in 1996. Greenspan was particularly concerned that the prices of stocks were growing faster than the Fed’s balance sheet. That was something new. Historically they had grown at more or less the same rate.

Ah yes, the by now quaint concept of “irrational exuberance.” It’ll pop back up below, spoken by a current Fed head. So Lee concludes:

We have seen that three prior surges in household net worth driven by cheap and easy central bank credit have crashed back to earth after about 5 years of extreme bubble gains. The current surge is now in its fifth year. What’s that ticking sound I hear?

Turns out, that ticking sound is the Fed.

Fed heads have been jostling for position to warn investors they’re dead-serious about stopping the money printing binge.

Last week, Dallas Fed President Richard Fisher trampled on any hopes bandied about that QE would somehow go on. He saw “increasing signs” that QE “has overstayed its welcome” and that “market distortions and acting on bad incentives are becoming more pervasive” – Fed-speak for pandemic. Stock market metrics were “at eye-popping levels” with valuations that relied ‘on belief in a financial fairy.’” Record margin debt was a problem. And in the bond market, “narrow spreads between corporate and Treasury debt reflect lower risk premia on top of already abnormally low nominal yields.” Things would have to be monitored “very carefully so as to ensure that the ghost of ‘irrational exuberance’ does not haunt us again.”

The Fed might be “feeding imbalances similar to those that played a role in the run-up to the financial crisis,” he said. It “is distorting financial markets and creating incentives for managers and market players to take increasing risk, some of which may result in tears. And all this is happening in uncharted territory.” So the money printing binge “should” end “as soon as is practicable.”

On Monday, Philadelphia Fed President Charles Plosser chimed in. He called for speeding up the process of ending the printing binge: Tapering “in measured steps” was a move “in the right direction, but the pace may leave us well behind the curve….” Even super-dove Chicago Fed President Charles Evans barked up the same tree: “The last two meetings we reduced the purchase flow rate by $10 billion and we’re going to continue to do that.”

The wonderful correlation in the chart above benefited the 1% more than anyone else, but it also benefited to some extent those households with at least some stocks in their portfolios and a home they own. In return, households with neither mostly saw their wages stagnate. If the Fed tapers its asset purchases out of existence, the correlation will continue, and the curve will bend, perhaps sharply. Household wealth won’t look so pretty anymore. And if the Fed ever allows its balance sheet to shrink to undo some of the “market distortions,” as Fisher called them, the correlation will also continue. And it will make household wealth look outright ugly.

The boom in asset values has been built on quicksand, that mix of artificial liquidity and a lackluster economy. While much of Wall Street and the media that serve it deny that the correlation exists, claiming that the boom was caused by economic fundamentals even if they haven’t quite materialized just yet, the smart money knows the correlation is real and understands the implications. They’re already looking for exits. And that could bend the curve even more sharply.