There are two areas where Abenomics, the democratically elected economic religion of Japan, has succeeded: creating inflation without causing wages to rise, thus whittling down real incomes; and devaluing  the yen by 25%, thus wiping out a quarter of the magnificent wealth of the Japanese without telling them directly. Grudging admiration is due Prime Minister Shinzo Abe for these accomplishments.

But in other areas, his record is spotty. One of the goals of watering down the yen is to goose exports by making them cheaper overseas and reduce imports by making them more expensive to consumers and businesses at home. It would crank up manufacturing and lead to a glorious trade surplus that would inflate GDP, turn Abe into a hero, and save Japan. That was the plan.

That plan has gone to heck. Not in small increments over the years, but in relentless month-to-month leaps whose viciousness surprised even the deep cynic in me.

So exports in January, at ¥5.25 trillion, rose 9.5% from a year earlier, the Ministry of Finance reported. Alas, it was only about half the rate at which the yen had been devalued over the 12-month period, and so by volume, exports dropped.

But Imports, which should have dropped as they’re getting more expensive due to the watered-down yen, soared 25% to ¥8.04 trillion. Japanese businesses and consumers had gone on a buying spree of goods made in China and elsewhere. 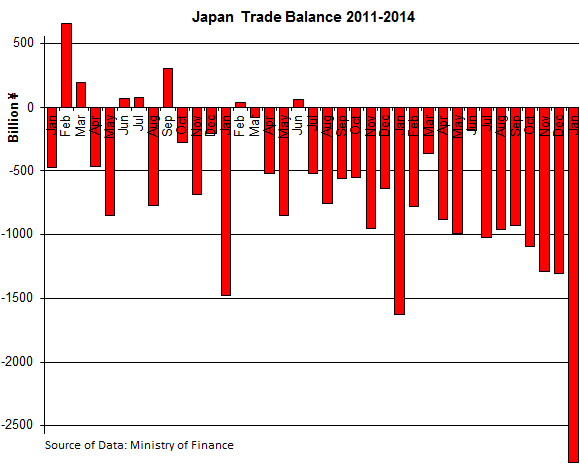 But don’t blame the shutdown of nuclear reactors. Sure, Japan has to import more liquefied natural gas and coal for power generation to make up for the loss of nuclear power. So the value of LNG imports rose 21.4% year over year – or ¥129.8 billion, largely due to the devaluation of the currency, not increased use of LNG. And the value of coal imports rose 14.8%, or ¥26.8 billion. Combined, ¥156.6 billion. Without that increase, the trade deficit would have been ¥2.63 trillion instead of ¥2.79 trillion. It wouldn’t have changed anything. It would still be by far the worst trade deficit ever.

And Japan doesn’t import LNG and coal from China, but it is with China that the trade deficit has exploded. Despite the well-orchestrated display of annoyance and aggression on both sides, Japan and China are joined at the hip through trade, and China is Japan’s largest trading partner.

To cut through the fog surrounding exports to China, a quarter of which are transshipped through Hong Kong, I combine the trade figures for China and Hong Kong. Exports to both reached ¥1.1 trillion, up 8.8% – less than half the rate of the devaluation of the yen! But imports from China and Hong Kong soared 34.0% to a record ¥1.92 trillion. Once upon a time, Japan was one of the few major countries that had trade surpluses with China. But in January, the trade deficit with China and Hong Kong nearly doubled to ¥826 billion.

Where was the damage? Imports of manufactured goods, such as iron and steel products, soared 29% from a year earlier. Imports of machinery, including computers: up 37.4%. Electrical machinery, including semiconductors, audiovisual equipment, and telecommunications equipment: up 33.7%. Transportation equipment: up 41.0%. Japanese companies used to excel in these categories. While some have gotten run over by international competition, others still excel at designing and making these products. They just manufacture them overseas.

Japanese companies have long shifted production offshore to take advantage of cheap labor, though they’ve been lagging behind their US counterparts. But since the earthquake in March 2011, they’ve gone on an offshoring binge to diversify their supply chains that had bogged down, and to escape electricity constraints, rising rates, and rolling blackouts in the wake of the Fukushima fiasco. They’re also locating production plants closer to their customers in their largest markets, particularly China, and particularly in the auto industry.

Now they have another reason: translating profits from foreign operations into the devalued yen applies a thick layer of glossy lipstick to their income statements – and the markets are blinded by this form of illusory sex appeal.

What these Japanese heroes are not doing is repatriating their foreign profits. They understand the fact of Abenomics; they don’t want to see their capital get demolished in the devaluation. Hence, these funds stay overseas, are reinvested overseas, and are spent overseas. The Japanese economy ends up holding the bag. That too is part of the madness of Abenomics.