It’s not like Europe is out of the woods, after years of recession, lurching from bank bailout to country bailout, and sweeping remaining fetid matters under the rug. But its banks are now sinking deeper into an even greater morass: the emerging-markets fiasco.

Since QE Infinity turned into a pipedream in early May last year when the Fed’s taper cacophony bounced around the world, it has been a volatile mess in the emerging markets that picked up steam recently with currencies, stocks, and bonds skidding. Argentina devalued. Venezuela has become a complete basket case. Turkey, which is mired in a political and democratic crisis, including a “frantic crackdown“ on the media, jacked up its interest rates to make your head spin, in a vain effort to prop up the lira. Brazil, India, Indonesia, and South Africa are flailing about to contain the ravages. China is slowing too. And what we hear is that giant sucking sound of hot money leaving.

What QE giveth, the end of QE taketh away.

And these already teetering European Banks are waving mysterious balance sheets whose decomposing “assets” no one is allowed to disclose, and whose sanctity no one is allowed to even doubt [read my exposé of how the French banking regulator hounded two doubting bloggers instead of investigating the banks….. Gagging Doubt: French Crackdown On French And American Bloggers Who Question Megabank Balance Sheets].

Turns out, these illustrious banks are stuck in the credit muck with loans totaling $3.4 trillion to the emerging markets (more than four times the exposure of US banks), according to analysts at Deutsche Bank. And $1.7 trillion of this malodorous debt is on the books of just six (mercifully unnamed) European banks. If a portion of those loans default….

“We think EM shocks are a real concern for 2014,” explained Matt Spick, analyst at Deutsche Bank – most likely the understatement of the century. “When currency combines with revenue slowdowns and rising bad debts, we see compounding threats to the exposed banks.”

Gosh, I don’t even want to speculate which banks would topple first.

And this is, according to a working paper by the Bank of International Settlements, how local-government bond yields in the emerging markets, volatility of these yields, and currencies have rattled nerves since the taper cacophony started last May (indicated by the black vertical lines). So very ugly: 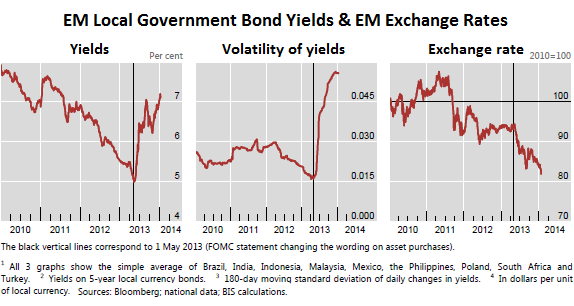 The putrid smell of crisis wafts around these illustrious European banks in a number of ways. Income from capital markets and private banking activities would shrivel. The collapse of a currency would hit capital held in that country and income. As interest rates rise – they haven’t risen nearly enough yet – and as the economies begin to wobble, a portion of the $3.4 trillion in loans would default or, via extend-and-pretend, slowly decompose. Loan losses would pile up. Some would be stuffed into the bank’s basements, safely out of view, where they would be layered on top of decomposing European “assets.”

Each individual bank has its own nightmare. Barclays is exposed to South Africa. Spanish banks BBVA and Santander have respectively $107 billion and $132 billion in loans to Latin America on their books; half of Santander’s portion is hung up in Brazil. BBVA and Italian bank UniCredit are up to their ears into Turkey. Standard Chartered – which made over 90% of its income from Asia, Africa, and the Middle East – and HSBC are exposed to the turbulence in Indonesia and India. In anticipation, the European banking index SX7P has dropped 7.7% over the last two weeks.

Is ECB President Mario Draghi also going to bail out the emerging markets with a “whatever it takes” promise, so that he won’t have to bail out his own banks manually?

One thing leads to another: Currency collapses and high inflation in Venezuela and Argentina, combined with chaos in Turkey, and lower growth in India and China make the emerging markets very unappetizing for the hot money – and as it flees, mere problems turn into crisis. The ensuing currency shock can trigger a credit shock. Higher rates and a wobbly economy entail loan defaults. Mess ensues. Because this is a well-established sequence in the emerging markets, the hot money, which has been through this before, is bailing out in advance. Mess ensues more quickly.

These glorious European banks have 12% of their assets in the emerging markets but get about a quarter of their income from them. Business there, as Deutsche Bank analyst Spick put it, is “unusually profitable.” Hence, their reckless desire to make hay where they can while they can, as things have been tough and murky in Europe since the outbreak of the debt crisis.

Now the haymaking is over. In just the week through January 29, $6.3 billion was yanked from emerging market equities, the largest outflow since August 2011. So EM stocks and bonds have been skidding, to the point where UBS CEO Sergio Ermotti himself felt like he had to intervene and put a stop to it, if only temporarily, and so he told Bloomberg today, “Short term, it looks a little bit overdone.”

It helped. Emerging market stocks perked up. A deus ex machina. But many more will be needed to keep these European banks from asking taxpayers for yet another round of bailouts, and stockholders, junior bondholders, and depositors for a solid round of very popular bail-ins.

The last stock-market bears have gone into hibernation, browbeaten and humiliated and ridiculed by years of brilliant rallies. Clinging to their analyses and the now silly notion that stocks should trade based on economic realities, they lost clients and money and their jobs. Read….Stocks Plunge: ‘And This Too Shall Pass,’ Or Something