According to Japan’s current state religion of Abenomics, devaluing the yen would boost exports by making them cheaper overseas and cut imports by making them more expensive at home. The resulting trade surplus would jumpstart the economy and induce companies to invest in Japan. It would save Japan. But the opposite has been happening.

And it has been happening, not in small steps with ups and downs spread over decades, but with ferocious intensity, month after month. The momentum is growing, not slowing. Energy imports conveniently catch the blame. But they’re only partially responsible. The other culprit? Offshoring by Japan’s coddled industries.

Abenomics did perform miracles in devaluing the yen. Between December 2012 and December 2013, the month of the current trade figures, the yen dropped about 20% against the dollar, 22% against the Chinese yuan, and 26% against the euro. But even that radical devaluation – and wealth confiscation – made the trade debacle simply worse.

Exports rose 15.3% in December year over year to ¥6.1 trillion yen, according to the Ministry of Finance. Glorious! But it was less than the yen had been devalued, and by volume, exports declined! Imports surged 24.7% to ¥7.4 trillion. The trade deficit jumped 101.6% to ¥1.3 trillion. From one December to the next, it had more than doubled! 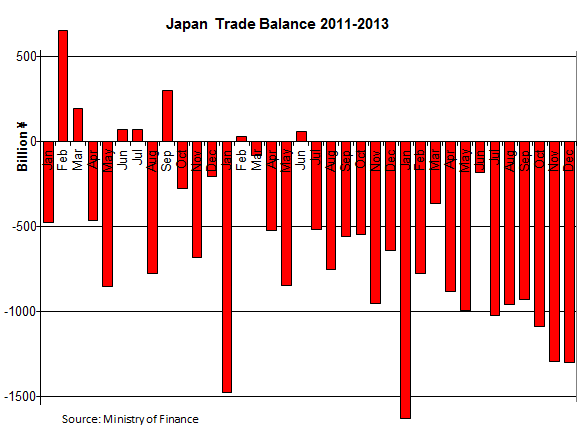 On the positive side of the ledger, though a perennial point of friction with the US, is Japan’s trade surplus of ¥591 billion with its second largest market, up 13.9%, on rising exports and rising imports. Japan exports to the US over twice as much as it imports from the US.

China is a more complex story. Despite saber rattling, island disputes, and unresolved historical events, China is Japan’s number one trade partner. Nearly a quarter of Japan’s exports end up there; nearly a quarter of its imports come from there.

But trade with China can be murky. Since a quarter of all exports to China are transshipped through Hong Kong, I combine the trade figures for both. Exports to both combined rose 29.7% to ¥1.52 trillion. The anti-Japanese sentiment had reached a feverish pitch in late 2012, and exports had taken a hit. In 2013, they recovered. But combined imports soared 29.8% to ¥1.62 trillion, for a deficit of ¥104 billion. Japan used to be one of the few major countries that had trade surpluses with China. Not anymore.

Japan also used to have trade surpluses with the EU. Ha! Exports rose 21.1%, less than the 26% devaluation of the yen against the euro! But imports from the EU jumped 32.8% for a trade deficit of ¥92 billion.

The media steadfastly blames Japan’s trade deficits on the increased imports of oil, natural gas (LNG), and coal needed for electricity generation since the shutdown of nuclear power. In December, they were up 36.6% from a year ago. But….

Japan doesn’t import mineral fuels from China and Europe, yet has growing trade deficit with both of them. The rise in imports of mineral fuels, which has stabilized, explains only about half of the story. The rest is structural – and getting worse.

In 2010, the last year before the earthquake and tsunami laid waste to Fukushima and entailed the shutdown of all nuclear powerplants, imports of mineral fuels amounted to ¥17.3 trillion. In 2013, they hit ¥27.4 trillion – ¥10.1 trillion higher.

In 2010, Japan had a surplus of ¥6.63 trillion (the last annual surplus). In 2013, Japan had a trade deficit of ¥11.47 trillion. The ¥18.1 trillion difference? The increase in mineral imports accounts for ¥10.1 trillion. The remainder – ¥8 trillion – is due to ongoing structural changes in the Japanese economy that started years ago: rampant offshoring.

Since the earthquake, Japan Inc. has redoubled its efforts to offshore production for a number of reasons, among them: diversifying the supply chain that had been severely disrupted; escaping electricity constraints, blackouts, and rising rates in the wake of the Fukushima fiasco; locating production plants closer to their customers in their largest markets, particularly China; and taking advantage of cheap labor.

The devaluation of the yen has added another motivation: the ability to translate profits from foreign operations into yen, which gooses income statements and adds artificial gloss that is then hyped by brokers and swallowed hook, line, and sinker by eager investors.

But companies are not repatriating their foreign moolah, and they’re not actually converting it into yen because it would just get demolished. They’re leaving it overseas, reinvest it overseas, and spend it overseas. And the Japanese economy doesn’t benefit.

Abenomics succeeds where it can. It’s easy for the Bank of Japan to print money and enable the government’s breathless deficit spending. It’s easy to add a few microns to GDP by blowing a pile of money on fish-barrel projects, so to speak. It’s easy to devalue the yen and quietly confiscate the wealth of the Japanese people. Meanwhile, the trade deficit is elegantly spiraling out of control as Japan Inc. is looking for the greener grass elsewhere; and in all the convoluted razzle-dazzle of Abenomics, it’s a gauge of hopelessness.

But we have to give grudging respect to Prime Minister Shinzo Abe for his brilliant successes: His visit to Yasukuni Shrine, where convicted Japanese war criminals are honored, re-ruffled some feathers among Japan’s most important trade partners; all assets denominated in yen, including household savings, have lost 25% of their value since his policies were baptized “Abenomics”; and inflation has kicked in nicely. But inflation without compensation and a consumption tax hike make a very toxic mix. Read…. The Japanese Feel The Heat From The Big Lie Of Abenomics