Today we got another piece of the puzzle: the German statistical agency Destatis issued its provisional report on economic growth for 2013: a measly 0.4% from prior year. The economy was “stable,” it said. Fourth quarter growth was an annualized 0.25%. Once again, it disappointed the smart people who inexplicably continue to forecast the continuation of an economic boom though it had fizzled in 2011. They just can’t help being gung-ho about the German economy.

“The annual growth number is weaker than I thought, but it isn’t indicative for 2014,” explained Citigroup economist Ebrahim Rahbari. “We expect the German economy to expand by 2% in 2014 and 1.9% in 2015….” Boooom!

Destatis was a bit more circumspect. “Obviously, the German economy suffered from the continuing recession in some European countries and from restrained growth of the global economy,” said its President Roderich Egeler.

Consumer spending rose 0.9%, government spending 1.1%. Those were the strong points. But investment in fixed assets dropped. German businesses have become huge investors overseas, particularly in China, but in Germany not so much: for example, investment in machinery and equipment dropped 2.2%. Employment growth slowed down to 0.6%. Exports, “due to a continuing difficult external economic environment,” as Destatis phrased it, edged up a mere 0.6%, but imports rose 1.3%. These are not harbingers of a booming economy.

Germany was baptized the “Sick Man of Europe” for its periods of anemic economic growth interspersed with mild recessions during the years 2002 to 2005. This was a time when Greece, Ireland, Spain, Portugal, and other Eurozone countries were growing wildly. Then came Germany’s own bubble which crashed in 2008 and 2009, followed by a brisk recovery. But since 2012, German economic growth has been back where it was when Germany was the Sick Man of Europe. 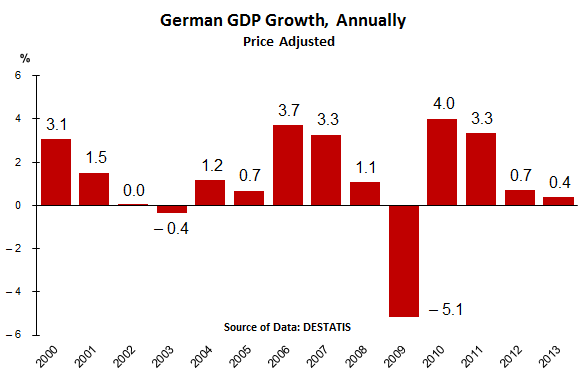 Only this time – and that says a lot about Europe and the Eurozone – Germany has been anointed the model economy for others to follow and admire.

Alas, the bad breath of the German “growth model” is even more disturbing on a quarterly basis. After the collapse of exports in Q4 2008 and Q1 2009 dragged down the whole economy, growth recovered with lightning speed in 2010. But by Q2 2011, the first signs of the malaise became visible. And in 2012/2013, the economy avoided the moniker “recession” – two negative quarters in a row – only by a statistical hair: Q2 and Q4 in 2012 were negative, separated by a mildly positive Q3. And Q1 2013 had zero growth. Over these four quarters combined, GDP actually shrank 0.34%. 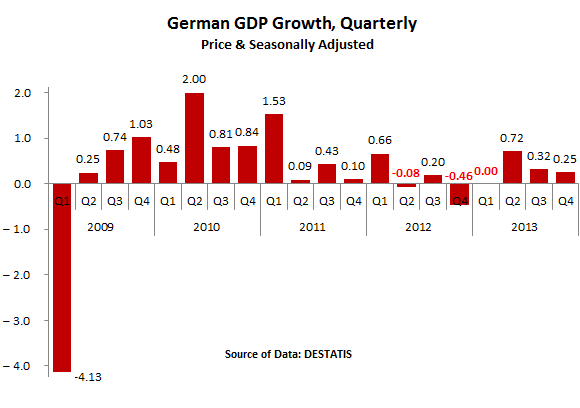 But Germany’s omniscient stock market never saw any of it. Unlike the economy, stocks have been booming. While much has been said about the stock market bubble in the US, given the lackluster economy, the conundrum pales compared to Germany.

But there is nothing to worry about. As always, economists, including those at the Bundesbank, are forecasting robust economic growth. They just can’t help it.