The crummy employment report for December released by the Bureau of Labor Statistics today is special: in December 2008, exactly five years ago, the Fed embarked with a passion on its zero-interest-rate policy and QE. It wanted to create the “wealth effect,” by which a small portion of society could borrow huge amounts for free and buy all manner of assets, which would then drive up asset prices and make those people immensely rich. In turn, they’d start spending some of this new wealth, which would create jobs, say, at luxury retailers.

The Fed has certainly accomplished the first goal. Asset prices have ballooned to ridiculous levels. The wealth effect, however, has once again turned out to be illusory. And its impact on jobs has been nil, as the lousiest jobs report in three years shows.

Employers only added 74,000 jobs to their payrolls, the smallest gain since January 2011, a huge disappointment for Wall Street pundits, after the revised gain of 241,000 jobs in November. Bad weather, snow, seasonal adjustments gone awry, the artic vortex, global warming, or whatever may be getting blamed for the debacle.

And in December, the labor force dropped to 154.9 million from 155.3 million in November. The number of working-age people not counted in the labor force, such as discouraged people who at least temporarily gave up looking for a job (that’s where the bad weather may come in), rose to 91.8 million. And the labor participation rate dropped to 62.8%, the lowest since 1978.

The broadest and most accurate measure of employment reality that the BLS offers is the Employment-Population Ratio, the number of working people as percent of the total working-age population. Since the Financial Crisis, and since the onset of QE and ZIRP, it has been mired at the bottom of its range, at levels last seen in the early 1980s. It had peaked in April 2000 at 64.7%. Ah yes, the halcyon days of “full employment.” In December it was 58.6%. It shows that the jobs added since the Great Recession have merely kept up with the growth of the working age population. 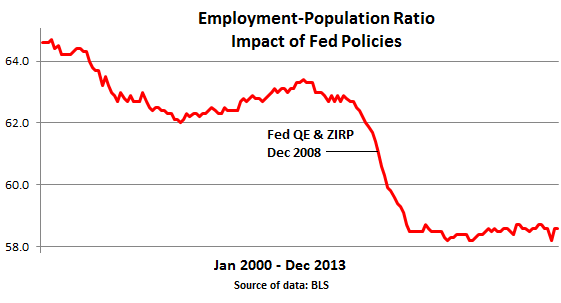 That’s the real employment picture – the glorious success of five full years of the Fed’s ingenious QE and ZIRP.

But for the stock market, bad news has been good news. Stocks have been driven up not by fundamentals or reality or inconvenient facts, but by Fed policy, and the policy has been to print money and allow large speculators to borrow overnight for free and buy assets with that money and drive up asset prices. Any “bad news” provided additional fodder for hope that more of this manna would rain down upon them, that it would inflate the stock market even more, as it has done for five years, and do so forevermore.

This principle kicked in again when the employment report was released. When trading started, the Dow was up 44 points at 16,488. But enthusiasm for “bad is good” instantly petered out, and the Dow dove 100 points. Why would bad news suddenly be anything less than good news?

The realization in some corners that the Fed may be serious about tapering! It can hide behind the fig leaf of the official unemployment rate that has now dropped to 6.7%, a five-year low. It doesn’t even have to admit that QE failed, though some Fed heads have already admitted it. And it can ever so gradually, and belatedly, deal with the very problem it created….

Hidden in the 25-page minutes of its last meeting, under the most wooden and convoluted prose, the Fed issued a doozie of a warning: it fretted about financial stability. It named four glaring signs of the very bubbles it so diligently created: soaring forward P/E ratios, crazy stock buybacks, record margin credit, and “leveraged loans” gone berserk. A momentous shift in their market manipulation mania – from trying to create that illusory wealth effect to fretting about blowing it all up, again. Read….Plagued By QE Indigestion, Fed Issues Asset-Bubble Warning