The civilian labor force in the US has been causing bouts of hand-wringing and head-scratching. It represents the official number of people working or looking for work. It’s what the official unemployment rate (U-3) is based on. If labor force participation drops – if for whatever reason, millions of people are no longer counted as part of the labor force, as is the case in the US – it’s a troublesome indicator for the economy and the real employment picture.

It also makes the unemployment rate, now 7.3%, look a lot less awful: if you’re not counted in the labor force, and you don’t have a job, you’re not counted as unemployed. There are millions of people in that category. And their numbers are growing, not diminishing.

“The irony of the U-3 unemployment statistic is the fact that while unemployment has gone down 30% since its 2009 peak, we have the lowest labor force participation rate in over 3 decades,” observed Ralph Dillon, Vice President at Global Financial Data, in an email. “The markets and politicians celebrate the official unemployment rate, but you have to be concerned with the trend that is most indicative of the health of the employment situation in this country: the downward trend of those who want to work and can’t.”

The chart (Global Financial Data) juxtaposes the unemployment rate and the labor force participation rate since 1980. After the financial crisis, suddenly, for the first time in history, they both started moving in lockstep. Downward. 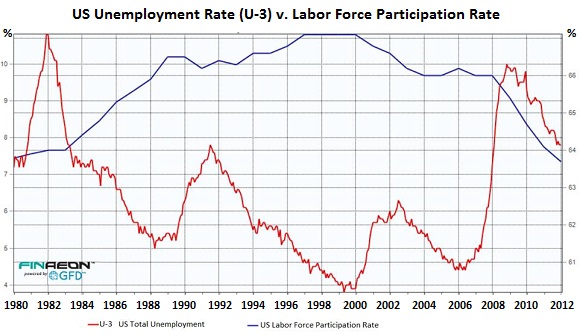 “This chart is a true representation of the crisis of employment in this country,” Dillon wrote. The diminishing labor force participation rate – the officially available labor pool, however unrealistic it might be – has been driving down the unemployment rate for the first time in history. 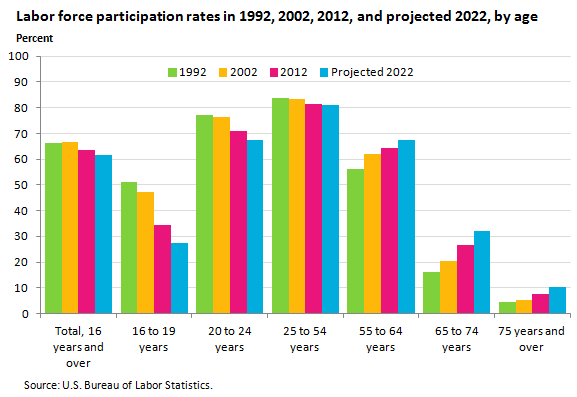 Among the 18 to 34 year old “Millennials,” those lucky ones who’re official counted in the labor force, unemployment has been a nightmare, with double digit unemployment rates, still, nearly 6 years after the financial crisis, reported the youth advocacy group Young Invincibles. It’s even worse for the 16 to 24 year olds, whose official unemployment rate is still 15%!

Sure, companies have been creating jobs since the Great Recession, but only at the growth rate of the working-age population, as evidenced by the BLS’s dreary employment-population ratio. It peaked in April 2000 at 64.7%, crashed during the Great Recession, and has been skittering along the bottom ever since. At 58.6%, it’s lower than it was during most of 2009! And the 30% improvement in the official unemployment rate – where the heck did that come from? The chart has the answer: people 54 and younger being statistically purged from the labor force.

Fed Chairman Bernanke wanted to reflect on the “accomplishments of the past eight years” and demolish “sceptics” that still doubted the Fed was the best thing since sliced bread. His policies “have helped promote the recovery,” he said. The recovery of what? Read…. Bernanke’s Delirious Praise For His Handiwork, The Concentration Of Power At the Top Banks