The big deleveraging since the financial crisis? An urban legend. In the corporate and financial world, money is free and debt is king. Households might have deleveraged a notch, but everything else has gone on a borrowing binge. That’s what the Fed wanted: borrow and inch out further on that thinning limb of risk.

Leverage in the stock market has hit record highs. The logic is perfect: borrow at low rates, buy stocks, sit back, and watch them soar. Making money with other people’s money is so much fun! Thank you hallelujah, Fed. The S&P 500 is up 27% this year. Cost of margin debt? In the low single digits. It is one heck of a deal. The biggest no-brainer of mankind.

So, margin debt on the New York Stock Exchange set an all-time high in April. During the taper tantrum over the summer, when bonds took a nosedive and emerging markets cratered, stocks wobbled from new high to new high, but margin debt stalled. Then in August, it took off again, defying gravity, along with the stock market, hitting new records in September, October, and November, rising 10.9% in those three months, to $423.7 billion.

But margin debt has something special: it peaks around a crash. 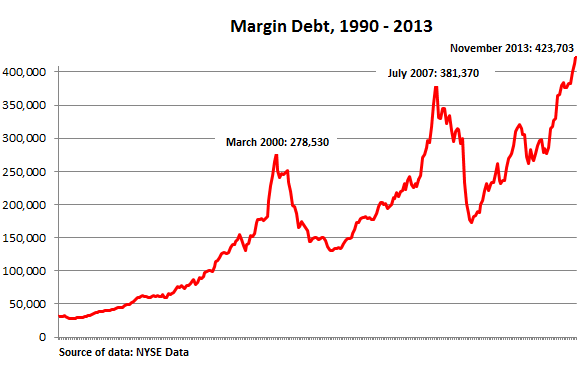 There have been three mega-crashes in my investing lifetime, and three huge peaks in margin debt.

In September 1987, margin debt peaked at $44 billion, or 0.88% of GDP. In August, the stock market had reached what we later learned was a top. And on October 19, it just gave up its ghost and swooned. That’s when I got my first margin call. You end up selling into a crashing market. You can’t even lower the price fast enough on limit orders. So you tell your broker – back then, this was done by telephone – to sell “at market,” and you go and vomit.

In March 2000, margin debt hit a record of $278.5 billion, or about 2.66% of GDP. That’s the month the dotcom bubble came apart. Over the 28 months that followed, the S&P, interrupted by false-hope rallies, lost 45%, the Nasdaq nearly 80%! Along the way, people who tried to catch falling knives, got their fingers sliced off.

Rising margin debt speaks of investor confidence – and eventually exuberance. As shares rise, investors are able to borrow more against their portfolios while maintaining their leverage ratio. So the higher the stock market flies and the more vulnerable and precarious it gets, the more we’re tempted to inch out further on that thinning limb of risk … and in the process, drive the market up further with borrowed money.

Or we can use margin debt to draw money out of our accounts without selling shares, to do some serious shopping. Spending unrealized profits that might evaporate at any time is the Fed’s “wealth effect” in action.

Record high margin debt is crummy at forecasting the next downturn, and it certainly doesn’t cause it. But it’s a warning signal that lots of people are looking at, and it has reached the point where they’re sitting on the edge of the chair, and they’re chewing on a million data points trying to time the next downturn to get out of its way, and they’re worried about the margin debt, and their curser is hovering near the sell button that they then click for some other reasons.

So the markets go south and soon margin calls go out, or scared traders start unloading some of their stocks before they get margin calls in order to maintain a modicum of control, and selling begets more selling, and forced selling kicks in, and all hell breaks loose. Few people are able to get out of the way of a self-reinforcing downward spiral. That’s how margin debt, normally a sign of investor confidence, becomes a nightmare on steroids.