Someone must have known something. Natural gas jumped over 2% this morning before the Energy Information Administration released its Weekly Natural Gas Storage Report at 10:30 a.m. The report would show how much natural gas was in underground storage nationwide on December 13, and how much had been withdrawn from storage during that week. Every Thursday, the report sends gas futures gyrating up or down. But today, they gyrated up from the start of trading.

“Unusually” cold weather had swept parts of the country. Natural gas consumption reacts sharply to cold temperatures. So analysts surveyed by Platts had jacked up their estimates for a withdrawal of 260 to 264 billion cubic feet, far above the 70 Bcf during the same week last year and above the five-year average of 133 Bcf for the week. Gas has been rising in anticipation for days.

When the EIA report hit at 10:30 a.m., traders gasped – those who hadn’t gotten word early – and clicked their buy-buttons. The drawdown had been even huger than expected: 285 Bcf. An all-time record! Nationwide, gas in storage had dropped to 3,248 Bcf, down 488 Bcf from a year ago and 261 Bcf below the five-year average. It was only a notch above the five-year minimum of 3,146 Bcf.

Under enormous volume, the price soared to $4.45/MMBtu at the Henry Hub, up 4.7% for the day. Up 27% from the beginning of November. The highest level since July 2011. Those who’d gotten early notice came out way ahead.

The EIA chart below shows storage levels over the past two years. The wide fluctuations are a function of relatively constant supply and steep seasonal variations in demand. Storage levels rise from the spring and peak in November when the heating season starts. Gas in storage is a buffer. If supply runs short at the end of the heating season, gas would have to be bought on the world markets as LNG, in competition with Japan which is willing to pay $17/MMBtu. The mere threat of this would trigger price spikes in the US that would cause traders to faint.

The dotted lines in the chart represent the five-year minimum and maximum storage levels. The blue line represents the levels since December 2012. Note its current plunge toward the minimum. 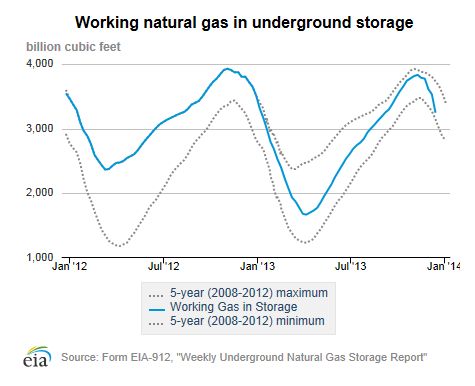 If you bet on natural gas, you bet on the weather. Not normally a smart thing. But there is more to it.

Much has been made of the collapsed rig count. As of last week, only 369 rigs were drilling for gas, as opposed to, say, over 1,600 in September 2008, or still over 900 in September 2011. This phenomenal drilling binge, funded by bubble finance, caused an equally phenomenal rise in production, and an even more phenomenal glut, and a horrendous collapse in price. By April 2012, gas hit a decade low of $1.92. There were fears that so much gas would be produced that it would exceed storage capacity by the fall, and that it would have to be flared – with its price going to zero!

When that fear appeared in the media, it marked the bottom. But the industry was bleeding cash. Billions had to be written off. Drilling activity for “dry gas” was in free fall. Those who could were only drilling in shale plays where the mix of oil and natural gas liquids (such as propane, butane, and ethane), which sold for much higher prices, made the well profitable. That philosophy continues today.

Every well has its own cost of production, and it’s hard to get a handle on it, beyond industry hype. Earlier this year, Christophe de Margerie, the CEO of French oil major Total, disclosed as an aside in a long interview that Total had “serious losses” at its shale gas operations in Texas and Ohio (Le Monde took down the link, but here is a PDF). An internal study determined that Total’s breakeven point for “dry” natural gas wells was $6/MMBtu. As a result, Total had stopped drilling for dry gas and would not restart until the price level would be above breakeven.

Whatever the calculations, this scenario has played out across the industry. Natural gas has been reduced to a byproduct of drilling for oil and natural gas liquids. Hence the rig-count collapse.

Yet that collapse hasn’t caused a collapse in production. Greater drilling efficiency and frenetic drilling for oil, and thus increased production of gas as a byproduct, have picked up some of the slack. And there is another reason. During the drilling boom, thousands of wells were drilled that were shut in because the price had collapsed or because there was no infrastructure in place to transport the gas to market.

Now this has changed. The Marcellus Shale, which ranges from upstate New York through Pennsylvania to West Virginia and parts of Ohio, experienced an epic drilling boom a few years ago. In 2011, the rig count hovered above 130, week after week. Now it’s down to 85 rigs. But instead of production plunging, it has soared – up 57% in the first half of 2013 over prior year. Reason: new pipelines and pipeline expansions are being put into service. Primary beneficiary: New York City. It finally gets to switch from dirty and expensive heating oil to natural gas.

Shale gas wells have violent decline rates. Production plunges over the first six months and then begins to level off. After a year, the well might only produce 10% to 20% of its early production. So, connecting these wells to new pipelines gooses production temporarily. Sooner or later, drilling would have to pick up to maintain production. But that’s not happening. In a number of other shale plays around the country, production is already declining; and the Marcellus will hit that spot too.

The solution to low price is low price. Dirt cheap natural gas in the US – and it’s still dirt cheap – is triggering structural changes. Power generators are building gas-fired powerplants instead of coal-fired plants. Foreign industrial companies are setting up production plants that use energy-intensive processes or need natural gas as feed stock. Additional natural gas pipelines to Mexico went into service this summer, and exports are rising. Other bits and pieces here and there, like increased use of gas in transportation, add up. The whole world wants to get access to America’s dirt cheap natural gas.

But there is a problem: natural gas has been sold in the US below the cost of production for years. It has torn into the fabric of the industry. Current production increases are a function of wells that had been drilled years ago but have only recently been hooked up to pipelines. As Total’s CEO pointed out: the price of natural gas can’t remain this cheap for very long.