The Federal Reserve was established in 1913 primarily, or at least ostensibly, to manage the dollar. The way the Fed has “managed” is best shown in a nifty chart that juxtaposes the exchange rate of the dollar against the Swiss franc (blue line) and the US Consumer Price Index, not seasonally adjusted (red line).

The destruction of the dollar – so clearly visible against the Swiss Franc – took on a sudden virulent form in 1970. I was just a kid then, but that’s what has transpired essentially my entire life. It’s not in some distant past. Every day, all day long, the relentless destruction of the dollar has continued, interrupted only by temporary but tradable rallies. Chart by Global Financial Data: 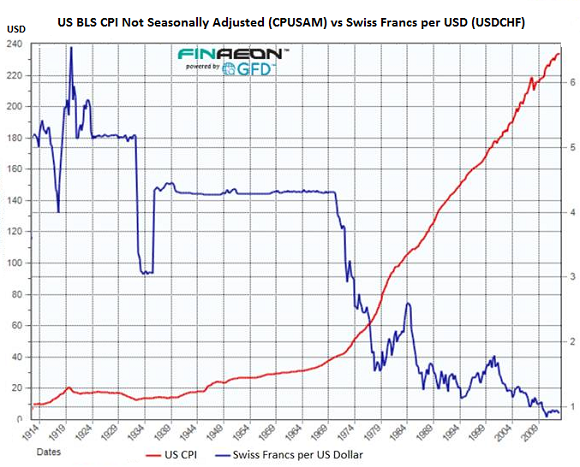 But wait: see how it has flattened out since August 2011? That was when the Eurozone’s debt crisis turned white hot, when Europeans and Americans were looking for a place to put their money, and they started buying Swiss francs, and hedge funds started playing that game too, and they drove up the franc and started turning the Swiss economy upside down. A few days later, a totally desperate SNB jumped into the currency war, guns blazing, and announced that it would establish a minimum exchange rate of CHF 1.20 per EUR, by printing, if it had to, “unlimited” amounts of Swiss francs and buying mostly euros with them. A strategy it has regularly reaffirmed. And the minimum has held.

That doesn’t mean that the dollar has stopped dropping. Au contraire. But now the Swiss franc is dropping in near-parallel with it – confirmed by the Consumer Price Index (red line) which continues to soar. Expect nothing to change from the incoming new “management” at the Fed.

So the Fed is going to start tapering? “It’s like you’re at a party and the keg is beginning to float,” a wealth manager writes. “When do you leave the party? Where do you go?” Read…. Where the Heck Do You Put Your Money When Tapering Starts?