It all came dressed up as manufacturing orders, whose monthly up and downs – adjusted to smithereens for seasonality, inflation, and calendar oddities – are largely meaningless, though they’re widely reported and chewed over. But the long-term trends are striking.

So first the ups and downs: manufacturing orders were up 1.9% in October year over year, but down 2.2% from September, when they’d jumped 3.1%. Part of the problem was the swing in orders for capital goods, such as ships, trains, and other big-ticket toys, which plunged 5.2%, while orders for basic goods and consumer products rose 2.2%.

The chart of the Destatis manufacturing orders index paints the scenery with laser-sharp clarity. Export orders (orange line) were below domestic orders (blue line) in the past until the giddy peaks just before the financial crisis – peaks that, by the way, have not been seen since! When orders crashed with nauseating speed in 2008, export orders acted as if the world had come to an end, but then recovered more quickly than domestic orders. And over the last three years, export orders have grown, while domestic orders have stagnated. 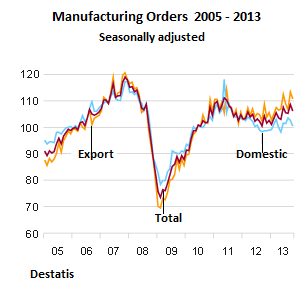 This triumph of the export orders, so to speak, is the result of a complex system, a governmental religion practically, that favors export policies at any price. When the Eurozone sank into its debt crisis and a steep recession, demand for German products from those countries withered, including from Germany’s largest trade partner, France.

But the German government is trying. I can see how heavily it is involved here in the Bay Area: the German Consulate, the German Chamber of Commerce, which is a government entity, the Federal Ministry of Economics and Technology, various ministries from Bavaria and other states…. they’re all holding events and are trying every way they can to bring German business people, often from closely-held midsize companies, into contact with American companies and with venture capital firms. Dual goal: exporting German goods to the US and importing US capital to Germany. And that, on a worldwide basis, has been the number one strategy of the German government – regardless of its color combination.