By Adrian Bono, Argentina, The Bubble:

In the last 24 hours, the province of Córdoba spiraled out of control, with the very fabric of society being torn apart after a sudden absence of law and order sent a portion of the population into a looting frenzy and residents and store owners boarded up windows and doors, grabbed their shotguns and climbed to their roofs, waiting for the inevitable encounter with the enemy.

No, I am not exaggerating. This is what was happening until a few hours ago in an otherwise idyllic province known for its sun, its mountains and fun-loving population. Córdoba was immersed in pervasive social unrest that has left at least two people dead, dozens injured and landed many others in jail. So if you’re having trouble understanding why, here’s an explanation.

Seriously? OK. Córdoba is a central province of Argentina, located to the northwest of Buenos Aires. It’s capital, Córdoba City (Pop. 1.3 million), is the second-largest city in Argentina and is located 700 kilometers away from Buenos Aires. You probably heard about Córdoba’s awesome mountains, forests and popular tourist destinations such as Villa Carlos Paz and Villa General Belgrano, known for its annual Oktoberfest celebration.

On Tuesday afternoon, after failed attempts at negotiating with the provincial government, the Córdoba police decided to go on strike. They were demanding higher wages and refused to go on patrol or leave the police stations, a type of protest known as “acuartelamiento,” unless their basic salaries were raised to at least 13,000 pesos a month (right now the basic salary stands at $6,000 pesos.) Here is a list with their demands.

It is estimated that 75 percent of the force joined the protest, which means that police presence on the streets was dramatically reduced. Since they also refused to leave their stations, if you happened to need help you were pretty much on your own. Suddenly, it was a Hobbes’ “state of nature” kind of world.

With word on the street being that there was no police around, the looting gained traction and became widespread as soon as the sun went down . At least nine supermarkets were looted in Córdoba City alone. Some policemen remained out on the streets, but they were in no way capable of stopping the mob. The Cordiez supermarket was attacked by a group of around to 50 people, stealing anything they could. After a few minutes, this is what the supermarket looked like:

As supermarkets and other stores began to shut down, looters realized that maybe food was not enough and it was time to go after other mundane things, such as sporting goods and electronics. People reported hearing shots as looters started attacking motorcycle shops and clothing stores. Things started getting worse. A lot worse:

People in Córdoba City realized that if the police wasn’t coming for help, it was up to them to protect each other. So they suddenly organized into neighborhood groups and started chasing down anyone who tried to break into a store. The video below shows a looter trying to escape an angry mob. He fails and quickly suffers the consequences:

Initially, the provincial government remained paralyzed. Governor José Manuel De la Sota (a Peronist at odds with the National Government) was en route to Colombia to attend a summit of provincial governors. He learned about the incidents during a layover in Panama and decided to cancel his attendance and return to the country. He landed in Córdoba minutes after 1 AM. As the entire province keep descending into chaos and the police wasn’t showing any signs that would suggest and end to the strike, De la Sota decided to pull out the big guns while flying back and ask the National Government for help. He allegedly tried to contact Security Minister María Cecilia Rodríguez, Security Secretary Sergio Berni and Cabinet Chief Jorge Capitanich but “could not get through.” He wanted them to order the deployment of the Border Patrol (or Gendarmería) in the province, hoping it would bring some peace to the streets.

At 3:54 AM, after being unable to communicate with Buenos Aires, he decided to tweet about it:

“We’ve been requesting the presence of the Border Patrol since 8 PM due to police strike. Looting in Córdoba City calls for immediate response.”

Seven minutes later, at 4:01 AM, De la Sota decided to tweet at President Cristina Fernández de Kirchner because, what the hell, maybe she was awake. Same message: “Urgent request for deployment of Border Patrol in Córdoba. Widespread looting calls for urgent response.”

But Cristina still wouldn’t respond. Frustrated, with the morning sun already up and still no official word from the Government, De la Sota sent a signed letter to the Cabinet Chief, explaining his frustration over the lack of attention and detailing his many attempts to call several members of the Cabinet. The official Twitter account of the Córdoba government, in an attempt to show that someone in the government was actually doing something, tweeted the letter, which – oops! – included the personal phone numbers of every member of the Cabinet mentioned.

As sunrise, Córdoba residents woke up to a post-apocalyptic scene. They could see each other on the roofs with shotguns, ready to defend their homes and businesses. If you added zombies, it all looked like the set of The Walking Dead.

They had also set up makeshift barricades in an effort to stop looters and thieves in any way possible. 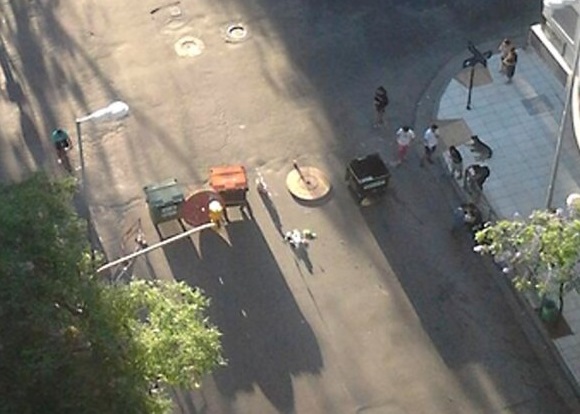 Minutes after 8 AM, Cabinet Chief Jorge Capitanich offered his daily press conference. The entire country was waiting for him to say the Government would deploy the Border Patrol, but his response was the exact opposite. He called the conflict a salary problem and said that, according to the Constitution, it was up to the province to solve it on its own. He also denied getting any calls from De la Sota.

He said the National Government would follow the situation closely and analyze the best way to work with the provincial government to solve it. Twitter, which never sleeps in this country, exploded immediately after Capitanich’s statements. The Government had let go of their hand. Córdoba was alone. And as a great man once said, you should never let a crisis go to waste. The political opposition took to Twitter to firmly request that the Government immediately deployed the Border Patrol and saved the world.   City Mayor Mauricio Macri

And the thieves, patting themselves in the back after making with such an amazing loot, thought it would be a rad idea to post photos of it on Facebook, because what better way to make your friends jealous than by instagraming your twenty new stolen cell phones and bragging about it?

Finally, before noon, the National Government decided to take action and announced it would send 2000 Border Patrol officers to the streets of Córdoba. Security Secretary Sergio Berni said De la Sota’s actions were “an embarrassment,” and particularly criticized his decision to tweet at the President at 4 AM.

But suddenly, a light at the end of the tunnel: De la Sota announced the Córdoba government had reached a deal with the provincial police, for which the strike was supposedly over and the police would return to their regular activities effective immediately.

So after almost 24 hours of mayhem and despair, order is slowly returning to the streets. However, the population is extremely upset, since it is apparent that in an internal war between a provincial and the National Government, the population is the biggest loser. By Adrian Bono, Argentina, first published on The Bubble.