By Dave Forest, Oil & Energy Insider, a premium publication that gives subscribers an information advantage when investing, trading, or doing business in the energy sectors.

One of the most critical pieces of news for the Exploration & Production sector came this month. Not a new discovery. Or a high-impact drilling technique. In fact, this development didn’t come from geologists or engineers at all. It came from a group of accountants.

Namely, mega-bookkeepers Ernest & Young. One of the leading firms globally in auditing and analyzing finances for oil and gas producers. This outfit sounded a warning on the future of the E&P sector. Telling investors they need to beware of a silent killer that is stalking producers in some parts of the world. Places stock buyers should be looking at reducing their exposure.

The accountants also gave some hints on which E&Ps appear immune to this potentially company-ending issue. Ideas that suggest a certain group of investments in the oil and gas space are going to outperform significantly. The issue driving this risk (and opportunity) comes down to one word: costs.

Ernest & Young looked closely at costs for the global E&P world as part of the firm’s annual “Global oil and gas reserves study.”  Their findings were astonishing. The numbers left little doubt that costs in today’s oil and gas world are weighing on producers like never before. Production costs in 2012 rose 6% globally—driven by higher prices for labor and services.

Now, 6% isn’t a huge amount on its own. But numbers like this start to get worrying when you combine operating costs with other rising expenses for E&Ps—like finding costs, the amount paid by producers to discover and book in-ground oil and gas reserves. Sifting through the data, E&Y found that finding costs are silently obliterating E&P profits. The cost to find a barrel of oil equivalent jumped nearly 30% in 2012, to $21.83 per boe from just $16.90 per boe in 2011.

On the back of all of these growing costs, the study shows that total E&P exploration and develop spending rose 20% in 2012. Over the last five years, global spending has grinded upward by an incredible 48%.

Here’s where these rapidly-inflating expenses get really worrying for investors: because E&P companies are no longer seeing the cash flow and reserves growth to support this spending. Just look at the numbers.

Combined oil and gas production globally rose by a meager 2% in 2012. With producers managing just a 1% increase in revenues from this output. Reserves also aren’t growing much. Oil reserves globally bumped up by just 3% in 2012. Worldwide gas reserves actually dropped by 2% on the year. Amid this stagnant growth, rising costs are hitting the bottom line hard. Worldwide after-tax profits for the E&P sector plummeted 16% in 2012, to $268.4 billion.

This story of flagging production and spiraling costs is all too familiar for anyone who’s been following another segment of the natural resource business lately—the mining sector.

Early in 2012, the CEO of major gold producer Newmont Mining, Gary Goldberg, sounded a warning on costs. His cautioning sounded odd at the time. Gold was trading at a very reasonable price of $1,600 per ounce. There was a sense that producers were poised for big profits and future growth. But Goldberg noted that in actuality, costs were silently killing the gold mining business. He pointed out that while the much-lauded rise in gold prices had upped bullion by about $1,000 per ounce over the previous decade, his company had seen its production costs rise by $900 per ounce during the same period. Essentially wiping out any profits—even at record prices.

These words proved prophetic. Less than a month later, softening gold prices cut the legs from under cost-weakened gold companies—with the AMEX Gold Miners Index losing 40% of its value in just three months. The miners have seen little recovery since.

The E&Y study suggests a similar rot may be afoot in the oil and gas industry. With all eyes fixed euphorically on high oil prices, few investors are noticing constricting production and reserves growth—not to mention contracting profits—from their E&P holdings.

But profits—not oil prices—ultimately drive share price performance. And the new study suggests that leading indicators on this front are pointed firmly downward. E&Y note that in places like the U.S., producers in 2012 actually spent more money than they made—with capital expenditures running 123% of operating profits.

The mining sector also saw such over-reaching prior to its crash. Producers spent more than they had on acquisitions and development. At the time, investors cheered the aggressive growth, believing that if you built it, rising profits would come. But as it turns out, spending beyond one’s means always ends one way—big debts and empty treasuries.

These Places Might Be Safe Havens From Rising Costs

Should investors therefore abandon the oil and gas business ahead of a massive collapse in valuations for the E&P sector? No—or at least, not all of it.

The E&Y study does provide a few positive indicators. Production areas outside of the U.S. seem to be enjoying lower costs—especially in Europe, where capital expenditures ran only 31% of operating profits in 2012. Globally, the average percentage of spending compared to profits came in at just 54%–much lower than the 123% seen in the U.S.

Investors may thus be served today by looking at oil and gas investments outside of “hot” shale plays in America. But for those who still want to bet on the phenomenal upside of shale, a closer look at the U.S. E&P space shows some important regional variations.

We won’t get new numbers on reserves growth and associated costs until early 2014—when most producers file their year-end reserves statements. But another metric gives us a sneak peak at who’s hurting and who’s hurtling when it comes to costs these days.

The chart below shows percentage changes in unit operating costs for several U.S. producers during the first nine months of 2013, as compared to the same period of 2012. It’s obvious there’s a big spread—some firms are seeing costs soar, while others are actually enjoying lower costs per barrel of oil or mcf of gas than they saw last year. 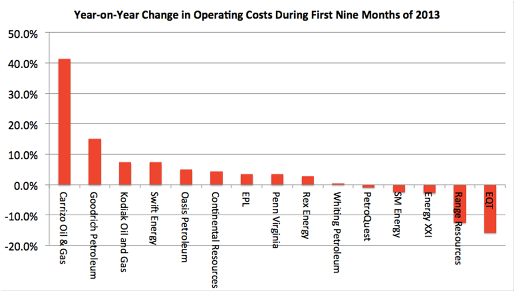 The difference may have to do with the plays these producers are working in. All of these E&Ps are primarily focused in one or another of major U.S. plays in the Marcellus shale, Eagle Ford shale, Bakken tight sands or the shallow-water Gulf of Mexico. And as the chart below shows, when you break down operating cost changes by play, some big differences emerge. 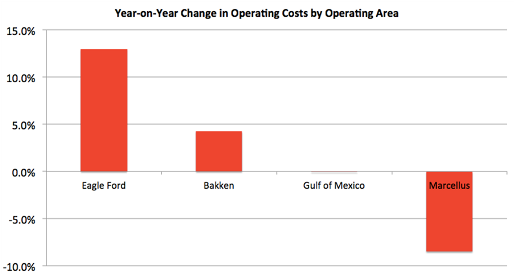 A big revelation is that costs for Marcellus producers are actually going down. Likely a result of increasingly drilling productivity here that’s creating higher per-well output. It’s simple math—when you get more gas from the same well, operating costs stay more or less fixed. So unit operating expenses go down.

This jives with recent findings from the U.S. Energy Information Administration that show drilling productivity in the Marcellus has risen 30% so far in 2013.

Aside from the explosive Marcellus, investors might also look to the more boring climes of the Gulf of Mexico—where costs have held steady so far in 2013. A result of this disregarded production area not seeing the elbow-to-elbow competition for services that’s driving up rates for onshore plays.

The warnings on rising costs thus may not be a reason for investors to abandon the E&P sector entirely. Rather, they might be a prompt to do so for the plays most struggling with this growing issue. By Dave Forest, Oil & Energy Insider, a premium publication that gives subscribers an information advantage when investing, trading, or doing business in the energy sectors.