There has been a symphony of calls for American investors to take their money, after the outsized gains in our gravity-defying stock market, and plow it into European stocks. Net inflows into European equity funds have been strong since April and have recently set all-time records. In October, allocation to Eurozone equities hit the highest level in over six years.

Excitement was palpable when Eurozone PMIs stopped dropping in most countries, and started rising in some, and things appeared to be getting less worse, giving rise to euphoria that a recovery was on the way, that profits would flow in profusion, and that equities would soar.

Equities did soar. But reality has bad breath. Total Q3 estimated earnings by the 286 companies in the STOXX 600 that have quarterly estimates, according to Thomson Reuters IBES, dropped €17.3 billion from a year ago, or -14.5%. That’s right, earnings are plunging. And they’re plunging the most in Italy (nearly -50%), Austria (-22%), France, Germany, and Spain (around -20%), followed by Britain…. It’s tough out there.

And the recovery-fueled revenues? Estimated Q3 revenues dropped by €39 billion, or -2.4%. The revenue quagmire covered all sectors except consumer cyclicals and non-cyclicals. Hardest hit: basic materials down 5%, telecom down 6.2%, financials down 6.4%, and tech down 6.5%.

Estimated earnings for the full year dropped by €20.5 billion, or -3.1%. That includes the still optimistic estimates for Q4. Of course, estimates for 2014 are sky-high because reality is still too far away, and hype organs can’t smell its bad breath yet.

Yet there are whiffs of it. When Euro Disney reported earnings yesterday for the year ending September 30, it disclosed that the number of visitors to Disneyland Paris dropped by 1.1 million, or 7%, to 14.9 million. Two-thirds of the decline was due to French visitors (who make up about half of total visitors). The remaining third of the decline was due to Italian and Spanish visitors. They no longer have the moolah to do fun things!

It wasn’t “disenchantment,” explained Euro Disney CEO Philippe Gas, but an “economic problem.” Other companies in the industry suffered similar declines. Compagnie des Alpes, which operates the Parc Astérix and the Futuroscope, saw traffic fall by 7.5%. For the Paris region, tourist count for 2013 is expected to be down 2%, largely due to fewer Spanish and Italian visitors.

To make up for lower traffic, Disneyland Paris cut promotions and raised prices. And so, overall revenues were down only 1.1% to €1.31 billion. And it doesn’t expect a rebound. It’s trying to fill the hole left behind by French, Italian, and Spanish visitors the best it can with visitors from other countries, such as Russia and Brazil. There is only so much blood you can still wring out of Eurozone dwellers.

In France, the troubles continue. There has been an avalanche of announced of 736 mass layoffs so far this year, though layoffs are difficult to impossible, very expensive, and often associated with political battles, labor unrest, plant occupations, vandalism, and taking local bosses hostage.

The list includes Alcatel-Lucent, Alstom, La Redoubte (whose labor unrest with strong support from political heavy weights is making the evening news), pork giant Gad, automaker PSA…. And this, even while the economy, as measured in GDP, is hopefully going to grow, at the brisk rate of, well, 0.9% in 2014 and 1.2% in 2015.

So, job creation in 2014? Nope. Companies are overstaffed by 250,000 people, according to recent estimates – due to the difficulties of laying them off. This has been confirmed by polls of CEOs who consistently say that they could raise output without having to hire. They have large productive reserves on their payrolls that now sit more or less idle. So growth, if any, in France’s anemic private sector won’t create new jobs. Instead, companies will try to shed workers.

For 2013, total job destruction will likely reach 91,000. Fewer jobs for more people: the working age population is growing by about 115,000 this year – France being one of the few European countries with that toxic combination of job destruction and a rapidly growing working age population. So unemployment will get worse, estimated to hit 10.9% next year. There simply is no letup in sight.

Not surprisingly, the French are having a field day, now that the EU Commission has joined the US Treasury in slamming Germany for its export-focused policies that are bleeding France, the rest of Europe, the US, and the rest of the world to death, somehow.

But even in Germany, exports are down 0.9% for the year through September, and imports are down even more, 1.9%. Germany, the locomotive of the Eurozone? Its economy has been crummy. Production, including construction and energy, dropped in September after rising in August in its typical zigzag manner, but still has not reached the level of 2007 – as the dreary graph shows (Destatis): 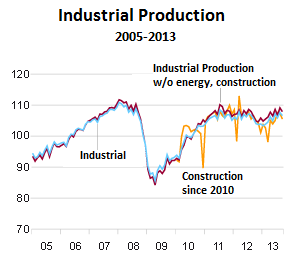 Same with the industrial orders. They’re still running way below their peak of 2007 (Destatis). 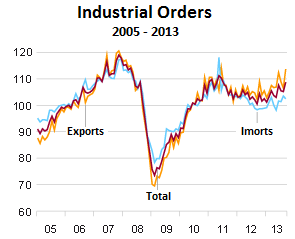 Retail sales look even drearier. In September, they dropped 0.4% from August, seasonally adjusted, but edged up year over year a measly 0.2% adjusted for inflation. On an annual basis, retail sales since 1994 have been on a bumpy downward slope. When sales for 2013 are available, chances are, this won’t look much better: 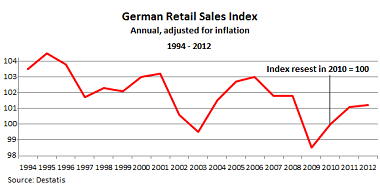 The economies of Italy and Spain have been wracked by long recessions, dreadful unemployment fiascos, decomposing assets in the banking sector…. Yet, Eurozone stock markets have been oblivious to reality’s bad breath.

Another sign that the sea of trillions that central banks have been printing, particularly in the US, floats even the leakiest boats. The bad breath of reality? Ignored. For the time being.