Unemployment in Japan dipped to 4.0% in September, from 4.1% in August, the Statistics Bureau reported today, a gloriously low rate by the standards of most developed countries. In comparison, the US struggles with an unemployment rate of 7.2% and some southern European countries with rates that are around 25%. And yes, Japan’s rate is seasonally adjusted. But not seasonally adjusted, it’s 3.9%. And it’s adjusted in many other ways; all countries beautify their unemployment debacles.

But there are real reasons for the low rate – a mix of the good, the bad, and the ugly.

Japan’s employment system is much tighter than in the US and relies on the corporate sector to fund the jobless by keeping them on the payroll and making them come to work even if there is nothing to do for them. In the process, companies make their life miserable to encourage them to move on. Sometimes these hapless people are shuffled off to “window jobs” for years, till retirement, humiliated, useless, and sad.

It’s perhaps not the ideal way to deal with unemployment, but it’s Japan’s form of corporate-funded unemployment compensation. Companies don’t have a choice; it’s much harder for them to get rid of people. In the US, layoffs are routine, but companies help fund the unemployment system via a tax on their payroll, and if they lay off a lot of people, their rates go up, and they’ll pay more for years to come.

Other factors for the low unemployment rate in Japan include a horrible deep-seated but studiously unofficial pressure system that very effectively removes pregnant women from the workforce. They’re expected to become full-time mothers – and then remain full-time mothers for the rest of their lives. The system makes it very difficult for them to reenter the workforce. As such, they fall off the list of the unemployed. It’s a true fiasco that Prime Minister Abe, to his credit, has vowed to reform, ineffectually so far. Young women are reacting: they know if they enjoy working and making their own money, they better not have kids. A choice many have been making in recent decades….

Hence, the mega-reason for the low unemployment rate in an economy that has been growing only slowly: a declining working-age population (15 and older). In September, it dropped by 60,000 from a year ago, to 110.91 million. This is a process that continues year after year, and it adds up. A sharply declining working age population lessens the impact of job destruction through automation and the now rampant offshoring.

Mature economies with high birthrates and ballooning populations of young people, like France, must grow their economies at a nearly impossible rate to create enough jobs just to keep up. If they don’t, the confluence of a growing workforce and stagnating or declining jobs turns into a toxic and ultimately volatile mix. That’s not in the cards for Japan.

However, Japan has a totally out-of-control budget deficit upon which the entire economy and political system has become physically dependent. It’s a massive, ongoing, artificial stimulus that is funded at practically no cost – near zero interest rates. And it has created the largest, and rapidly growing, mountain of national debt anywhere. It cannot be maintained. And it will wreak havoc. So Japan has its share of devastating problems, but unemployment is not one of them.

In the graph below (Statistics Bureau), the seasonally adjusted drop in the unemployment rate to 3.8% in July, the jump in August to 4.1%, and now a dip, appears to be a statistical squiggle. Also note the consistent decline from the financial crisis, when the unemployment rate had spiked. The red line is the “supplementary estimated” unemployment rate following the earthquake and tsunami that caused a partial shutdown of the country, in whose wake normal statistical procedures were no longer producing meaningful results. 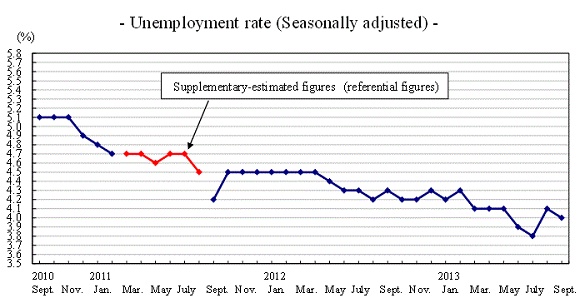