Since March, when it hit the debt ceiling, US gross national debt has been bouncing around the range between $16.73 trillion and $16.81 trillion. Of course, the government kept spending – producing gargantuan, if slightly less gargantuan, deficits. That money had to come from somewhere. So it was borrowed. It simply couldn’t officially be added to the debt. Instead, it was taken from other accounts, to be repaid later, robbing Peter to pay Paul, as it were.

With these lovingly called “extraordinary measures,” Treasury Secretary Jack Lew and the thousands of brains at the Treasury were able to keep the US afloat. Now this money, which had been spent months ago, is starting to show up in the official debt. If all this sounds like congressionally mandated hocus-pocus, well, it is.

So the US gross national debt jumped $328 billion from $16.747 trillion to $17.075 trillion the day after President Obama signed the deal into law that presumably avoided default and reopened the Federal government for business, including Alcatraz, the former Federal hoosegow outside my window, now Federal tourist attraction.

In the graph below, note the exponential increase since 2001. Also note the leveling off in 1998-2000. When Congress and the President want to, they can! But now, they don’t want to. 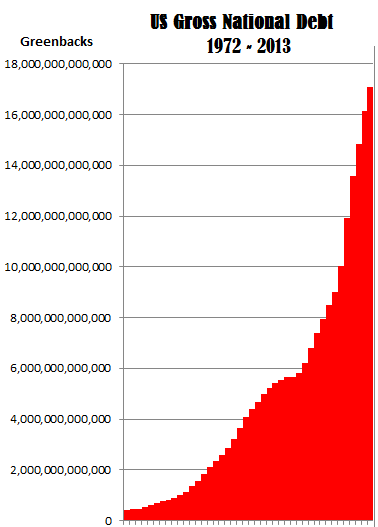