When the Fed shied away from tapering its $85 billion a month in asset purchases, while simultaneously downgrading the economy for the third time this year, it gave the impression of being mired in fear. It has many reasons to be afraid. But one in particular.

Despite the nearly $4 trillion in printed money out there and interest rates stuck at near zero, the economy is wobbling along just above stall speed. What if the economy slipped into a recession while the Fed is busily messing with the markets, as it has been, ostensibly to foster economic growth? That would be embarrassing. The last pretense that QE might support the real economy would fly out the window.

But QE has been very effective in goosing asset values and manipulating down interest rates across the spectrum. And over the last two years, it inflated home prices, in many cases at bubble speed into bubble territory.

Since early May, however, mortgage rates have been soaring, and it must have evoked a nightmare in the Fed’s collective gray matter: The correlation between mortgage rates and home prices. It’s depicted in the Fed’s ultimate cold-sweat graph (by Global Financial Data): 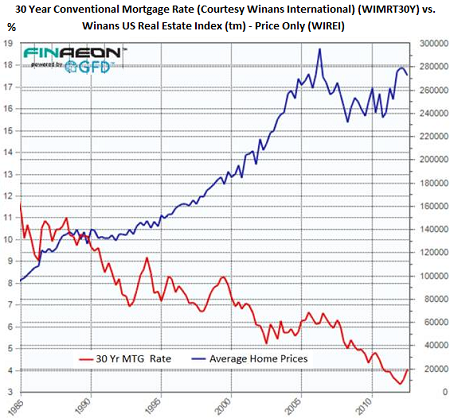 The Fed, which caused this conundrum through its manipulative practices, already blamed higher mortgage rates for weaknesses in the economy. And it’s afraid that its QE house of cards might come tumbling down when the bad breath of reality is allowed to blow on it.

So the Fed dug in its heels. It would continue doing exactly what hasn’t worked for five years, in the hope that even more of the same might finally do the trick, rather than admitting, tail between its legs, that all QE has done is create asset bubbles.