Germany’s robust global conglomerates and the vibrant Mittelstand (privately held enterprises that have become world leaders in their niche, until the Chinese came along), decorated with real-wage and benefit declines that have persisted since the heydays of Reunification and that have knocked down the cost of labor and made entire industries competitive…. they all have been bandied about as economic model for troubled, if unenthusiastic Eurozone countries.

But there is a darker side. Because somebody has to pay the price. As real wages and benefits were being whittled down to make Germany’s industries so competitive, and their owners and top managers so wealthy, well, the workers on the other end of the deal had to tighten their belts – from workers without minimum wage to surgeons!

So in July, again, retail sales dropped 1.4% from June, adjusted seasonally and for inflation, according to the German statistical agency Destatis. While retail sales compared to July 2012 rose 2.3%, they did so only because July 2013 had 27 selling days, as opposed to 26 days a year ago. Without that extra selling day, year-over-year sales would have been flat.

For the first seven months of 2013, retail sales edged down 0.1% from the same period last year. Food, drinks, and tobacco were up 0.6% but non-foods were down 0.8%, with furniture, appliances, and construction supplies down 2.7%, and books, jewelry, and other items down 3.5%. And there are changes underfoot in terms of who gets to do the selling: internet sales jumped 7.0% at the expense of brick-and-mortar operations.

On an annual basis, adjusted for inflation, retail sales since 1994 have this sadly drooping shape: 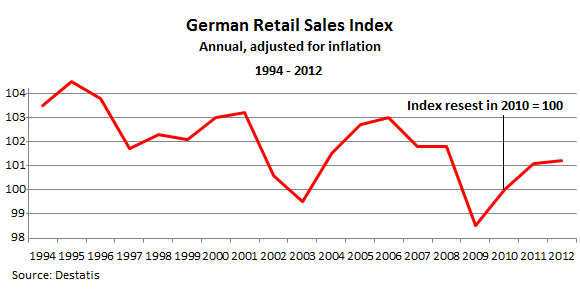 Though consumers have filled part of the hole by learning from their American uncles and borrowing against the future, the real-wage declines and benefit cuts have nevertheless resulted in an unusual phenomenon that has gripped the German economy since the early 1990s: in our world where consumerism reigns, Germany experienced two decades of retail quagmire.

But absolutely no debacle is allowed to interfere with Chancellor Merkel’s efforts to hang on to her job, and any debacles get immediately swept under the rug at least until after the elections on September 22. Every time uppity opposition voices stir up some controversy, it’s brushed off, denied, ridiculed, or minimized – and it has worked admirably well. But suddenly there’s Greece again.