These estimates of earnings growth that analysts work on so studiously by copying and pasting what companies tell them, or by doing channel checks and poking around the industry, and that companies have to exceed at all costs “on an adjusted basis,” though they’re just as likely to miss them these days? Well, these estimates have been shrinking for the calendar year 2013 – but not until the last possible moment when reality forced them down.

“Why so much confidence about the coming acceleration of the US economy and corporate earnings?” an insider wondered. “Even many bears are bulls. David Rosenberg has become bullish, and Albert Edwards only weakly bearish (perhaps the sunny end of his personal spectrum). Earnings forecasts reflect this pervasive optimism.”

But reality started to bite into that optimism, belatedly. The table below shows the earnings-growth forecasts for the calendar year 2013 as analysts made them, and lowered them over time (source: Thomson Reuters). But it still includes the hilariously optimistic growth forecasts for the fourth quarter, the quarter where a sudden boom is going to pull the whole year out of its earnings funk. A true deus ex machina. 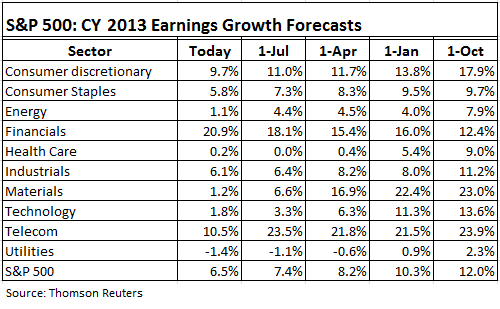 Health Care earnings-growth forecasts dropped from 9.0% in October to 0.2% now. And look at our tech heroes, the sector that we once thought of as fast growing. Well, growth estimates dropped like a rock, from 13.6% in October to a measly 1.8% now. Telecom was whittled down from a dizzying 23.9% to 10.5%.

For the S&P 500 overall, earnings forecasts for 2013 were nearly chopped in half, from 12.0% in October to 6.5% now. And darker clouds are moving in: as of last week, Thomson Reuters estimates that earnings for Q2 for all sectors except financials will be $200.5, down 0.35% year over year. Declining earnings!

How long can this dichotomy between reality and “pervasive optimism,” as the insider said, go on? Well, it has been going on unperturbed for a while. Despite estimates getting cut with a cleaver, our fabulous S&P 500 has jumped 18.4% since October 1 to its all-time high of 1,710 on August 2 – though it has now given up 4.7%.

But the future looks brilliant, according to our analysts whose estimates for corporate earnings growth in 2014 have remained at a whopping 11.3%. 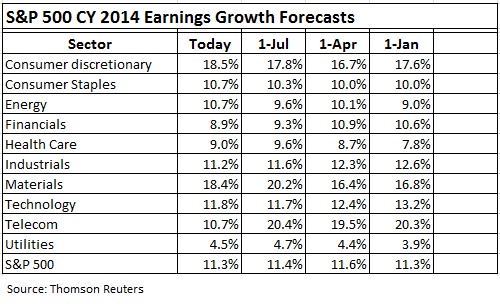 Optimism reigns, come heck or high water, despite crummy sales and ongoing pressure on earnings. However, they did slice earnings growth in the telecom sector from a breath-taking 20.3% to 10.7%. Is reality starting to sink in? But look at tech: earnings in 2014 are suddenly going to grow 11.8%, after stagnating in 2013 – based on what, exactly? I don’t know either.

So we relish the blinding growth of corporate earnings in 2014 while we still can before it gets whittled down, belatedly, quarter after quarter, until at the last moment it resembles some sort of reality that at least some companies can exceed, “on an adjusted basis.” It worked like a charm, at least through August 2, thanks to the $85 billion that the Fed has been printing every month. But that may well peter out by mid-2014. So, no money from the Fed, higher long-term interest rates, perhaps declining earnings…. And then what for stocks? Another 18% rally?