The bond selloff didn’t surprise anyone. Investors knew that it would happen, would have to happen. Gurus of all stripes had predicted for years that it would happen, that the ridiculously low yields weren’t sustainable, that the Fed would eventually have to back off – only to watch with a mix of helpless frustration and ironic bemusement as the Fed or some other central bank opened the spigot even wider.

Meanwhile, investors decided to brush off the razzmatazz and just hang in there until it would happen, then get out in the nick of time. And they rode up the most gigantic bond bubble in history. But real cracks appeared in the Treasury market last fall when yields rose despite the Fed’s announcement of QE infinity designed to repress yields.

So, on April 30, it became official. In light of sky-high corporate bond prices and record low yields, billionaire Wilbur Ross of WL Ross & Co. warned during a panel discussion of the long-term issues in bond la-la land. This – whatever was coming down the pike – wouldn’t be just a brief dip that you could buy. A mountain of debt had been issued in recent years at artificially low rates, thanks to the Fed’s machinations. It would have to be refinanced in a few years at much higher rates. “There’s a tremendous amount of interest-rate refinancing risk being built up,” he said. “We’re just building a bigger and bigger time bomb.”

Others chimed in. Joshua Harris, co-founder and chief investment officer of private-equity powerhouse Apollo Global Management, offered this tidbit of immortal wisdom to the still euphoric bondholders: “run – do not walk!”

And they did. All at the same time. It stopped the crazy feeding frenzy for yield. It turned the junk-bond bubble into a rout overnight. That “time bomb” would hit them the hardest. There’d be defaults. Value would just vanish. These risks are worth taking, if yields are high enough. But they weren’t. As the average yield on junk bonds hit a record low of 5.24% on May 9, investors opened their eyes. By June 26, it had jumped to 7.02%. And it’s just the beginning. The chart shows this vicious 6-week spike: 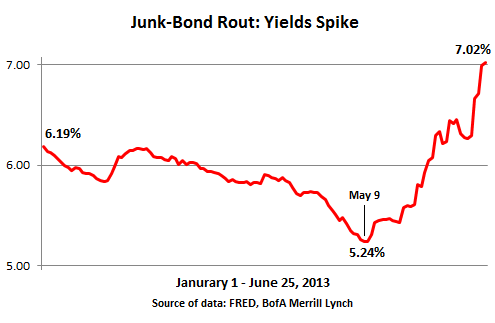 Even some of the least risky and most liquid paper out there, Treasuries, started diving in early May. Last week, the 10-year note experienced its worst selloff since June 2009 – the depth of the Financial Crisis! On Monday, yields hit 2.66% – up from 1.66% on May 2, and more than double the August low of 1.3%! Now they’ve settled a bit, at 2.58%. Investors are contemplating losses of over 10% since early May – in what is considered one of the most conservative investments around.

Those who own actual bonds, and don’t sell them, will be able to ride out the storm – assuming the issuer doesn’t default – patiently collecting puny coupon payments and allowing inflation to eat into their investment. But most retail investors, when they buy bonds, buy bond funds. And there, the massacre has been brutal: $48 billion have been yanked out of bond mutual funds so far in June.

Bond fund investors have a problem that holders of actual bonds don’t have: if your bond fund gets hit by massive waves of redemptions, you can’t ride out the storm without losses!

At first, a bond fund typically uses its cash cushion to deal with redemptions and then sell bonds gradually. Fund investors might not know the difference. But during big waves of redemptions, such as those recently, bond funds scramble to sell what they can sell into an increasingly illiquid market. So they’re selling Treasuries and their most liquid high-quality corporates – where losses are relatively small. The best stuff first.

Even in good times, corporate bonds can be fairly illiquid. There may be days and sometimes weeks or even months between trades of a particular issue. So marking illiquid bonds to market on a daily basis, when there is no discernible market, can be tricky.

But when bond prices drop, liquidity dries up further. The gap between what sellers want and what buyers are willing to pay becomes so wide that many bonds essentially stop trading – unless there is a forced sale! Hit with a wave of redemptions, a bond fund might have to sell less liquid bonds for whatever it can get for them – much less than the “market value” on its books. With each sale, the fund recognizes the loss. And as the fund dips deeper into its illiquid lower-quality bonds, particularly junk bonds, during the worst bouts of a selloff, losses accelerate. Investors get spooked and bail out. Hence, more redemptions. And more losses. It’s the reverse of the Fed-inspired feeding frenzy. The reverse of the wealth effect.

In the worst cases, such as the formerly $14-billion Schwab YieldPlus Select Fund, now defunct, it ends in a bloodbath. Even well-managed bond funds can have some ripples. Bond funds that realize losses while they’re forced to sell at the worst moment can’t recuperate those losses even if bonds – those that don’t default – rise again. Those gains go to whoever was on the other end of the transaction. And the buy-and-hold bond fund investor ends up holding the bag.

In an environment of rapidly rising interest rates, bonds with long maturities require nerves of steel and the willingness to sit on a crummy investment for years, or even decades. But bond funds can be outright treacherous – yet, in another display of Wall Street genius, it’s the conservative retail investor who gets lured into them.