The Dow Jones Industrial Average and the S&P 500 have been stumbling like drunken but determined sailors from all-time high to all-time high, despite an ongoing employment fiasco and lousy economic data. And despite an avalanche of declining corporate revenues: of the 30 Dow components, 25 reported first-quarter results so far, but their combined revenues didn’t show the dizzying growth you’d expect during times of stock market records, but they dropped 1.6% from last year, led by Caterpillar with a 17% dive. Even Exxon’s revenues were down. And so were IBM’s.

But our drunken sailors took no notice. They’re fixated on the Fed’s zero-interest-rate policy and relentless money-printing and bond-buying binge. It not only inflated stock prices to record highs but also bond prices across the board, pushing yields down to record lows. A trend that had actually started in the early 1980s – endlessly rising stock prices and endlessly dropping bond yields. This graph by Global Financial Data that compares the S&P 500 and the Dow to the 10-year Treasuries Constant Maturity Yield since 1910 has taken on the shape of terrifying open jaws of a ravenous crocodile: 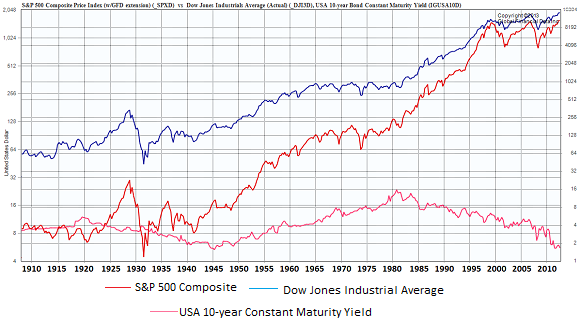 “Could we be looking at the “Mother Of All Shorts?” mused Global Financial Data. Looks just too tempting. The open jaws already looked terrifying in 1999, and then again in 2007, shortly before epic crashes, but never more so than today.

Bonds are “a terrible investment right now,” fretted even the avuncular face of Wall Street and the Fed, our favorite Warren Buffett, on CNBC. They’re “priced artificially,” he said, driven up by the Fed’s purchases of $85 billion a month, “and when that changes, people could lose a lot of money.”

But then he talked up his book that had tremendously and directly benefited from the Fed – many of his largest investments had received hundreds of billions in Fed money and some of them had even issued taxpayer-guaranteed bonds, including Wells Fargo and Goldman Sachs: “Stocks are reasonably priced now,” he said, though they’ve been even more inflated than bonds, and though, after the great open-jaws moments in 1999 and 2007, they crashed ferociously, while Treasuries continued to rise in their loosey-goosey manner – as always, the Mother Of All Shorts, whether bonds, stocks, or both, will only be confirmed afterwards.