Hasbro, the second largest toymaker in the US behind Mattel, confessed that it would miss fourth-quarter revenue estimates. Christmas wasn’t kind. Despite “double digit growth in our emerging markets business,” as CEO Brian Goldner said, revenues fell by 2% for 2012 and by 3.8% for the quarter. But 4% inflation, preferably more, would have covered up that debacle.

The consequences are brutal. There will be a pile of restructuring charges, and 10% of the people will be axed—a collective punishment that the Romans used to dish out to lackadaisical legionnaires. They called it “decimation” (Latin for “removal of the tenth”). One in ten soldiers, determined by drawing lots, would be stoned or clubbed to death by his buddies. It did wonders for morale, and the whole empire collapsed.

Procter & Gamble, the consumer products giant with a myriad of ubiquitous brands, brimmed with optimism in its earnings call on Friday as CFO Jon Moeller praised its “growth strategy.” But in the end, sales grew only 2%, about the rate of inflation. It’s tough out there.

A decimation had already been announced last February: 10% of non-manufacturing employees, “roughly 5,700 roles,” he said. Not people, but “roles.” 5,500 of these roles were already gone. The rest would be gone soon. Ahead of schedule. But it still wasn’t enough. In November, P&G “committed to do more,” that is axe another 2% to 4% of “non-manufacturing enrollment,” but “any additional enrollment progress”—enrollment progress!—in fiscal 2013 would give P&G a “head start” for their 2014 to 2016 “enrollment objectives”.

But why this decimation? Sales growth. Or rather, the lack thereof. Which Moeller said, would be “1% to 2%.” Below the rate of inflation. Other large companies are in a similar predicament. Microsoft, for example, admitted on Thursday that its revenues rose a paltry 3%. Inflation is just too embarrassingly low for these corporate giants that are dependent on incessant price increases to doll up their top line.

Fed to the rescue! And it has been trying. After years of escalating waves of QE, the Fed has finally managed to print so much money that its balance sheet officially as of Friday, and for the first time in US history, broke through the $3 trillion mark. Here is a screenshot to eternalize the historic event: 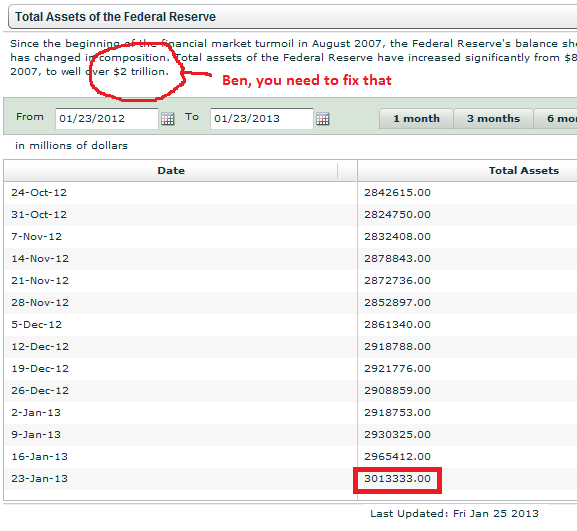 On August 1, 2007, when the prior all-time-craziest Fed-inspired credit bubble was showing signs of blowing up, there were “only” $874 billion in assets on that balance sheet. Over the last two months alone, the Fed printed enough dollars to mop up $160.4 billion in securities. The two largest asset groups on the balance sheet: US Treasuries ($1.697 trillion) and mortgage-backed securities ($983 billion). Every month the Fed will add $45 billion in Treasuries and $40 in mortgage-backed securities. Until it comes up with something new.

Other central banks have also run their printing presses until they’re white hot. As all this money went looking for things to buy, it pushed bonds into the stratosphere, and yields into hell. Risk is no longer compensated. Some governments have been borrowing at negative yields. Even 10-year Treasuries yield less than inflation. And junk bonds with a considerable chance of default, if the free money ever dries up, yield as little as a 1-year FDIC-insured CD used to yield before the financial crisis. Commodity prices have been driven up. Food has become unaffordable for many people in poorer parts of the world. And equities have been driven to lofty heights. China just warned that “hot money” fresh off the US and Japanese presses would wash over China and drive asset bubbles to even more insane and dangerous heights.

But the one thing all this money-printing just hasn’t done in the US in 2012 is create the kind of substantive inflation that a lot of corporations need to beautify their revenues. Inflation creates the pretense of growth—just like salaries that have been rising, but less than inflation. It makes things look good on the surface, and analysts can go around and hype the company’s “growth strategy,” and everybody is happy. Reality be damned.