Now that the dust has for the time being settled from the November/December 2012 drama surrounding the US Court ruling(s) regarding Argentina’s payment on defaulted bonds, I want to take a comprehensive look at this confounding snaggle—ahead of what will certainly be a titillating appeal in February.

Emerging economies access international capital markets and investors by issuing debt in hard currencies like US dollars and Euros, rather than in their local currency (Argentine pesos, Indonesian rupiahs, Thai baht, etc.).  These dollar bonds are issued under US law rather than local law, making the currency and enforcement of payment less risky and thus more attractive to a wider pool of investors.

In 2001, Argentina defaulted on US $95 billion worth of debt, the largest sovereign default in history.   In 2005 and again in 2010, it offered holders of defaulted bonds the option to swap for restructured bonds that paid 30 cents per dollar, or 30% of the value of the original bonds – the harshest restructuring since World War II.  Between the 2005 and 2010 swaps, holders of 91% of the defaulted debt had participated in the restructuring and accepted the lower payment.

That created two categories of bondholders:  the 91% who accepted restructured debt and the holdouts, who did not.  And many of the holdouts resold the already defaulted bonds on the secondary market, creating everyone’s favorite category of holdouts:  the vultures, investment funds that bought this defaulted holdout debt and are trying to get back the full value.

Keep in mind: these are US dollar denominated bonds issued by the Republic of Argentina under New York law.

Remember the Libertad, that fun military frigate that was impounded in Ghana from October through December 2012?

The ship was held because billionaire Paul Singer’s NML Capital, a subsidiary of the hedge fund Elliot Management Corp and vulture fund numero uno, obtained an injunction from a Ghanaian court based on the money owed on the defaulted bonds.  Holdouts have been trying since 2001 to recoup the money owed, but Mr. Singer takes the cake on creativity with his efforts to seize planes, ships, and even money held by the US Federal Reserve.

NML Capital has been going after Argentina in New York on the grounds that paying holders of restructured debt while not paying holdouts violates the pari passu clause, dictating that all bondholders must be treated equally. On October 26, a US Court of Appeals in New York upheld the ruling that Argentina was indeed in violation of pari passu and was legally obligated to pay holdouts.

But the real kicker was delivered on November 21 by Federal Judge Thomas Griesa, who ruled that Argentina must pay holdouts the full value (principal plus interest) if they were going to make payments on the restructured debt.  Critically, Griesa specified that third parties would be in violation of the law by helping Argentina skirt this ruling, meaning banks and financial institutions.

Essentially Argentina was given the choice to pay US $1.3 billion to holdouts and vultures, or default on its restructured debt.  Conundrum.

On November 27, Fitch downgraded Argentina from a B to CC.

On November 28, a temporary reprieve was granted in the form of a stay on Griesa’s ruling, putting the final decision off until an appeal to be heard on February 27, 2013.  This allowed Argentina to make its December interest payments.

A Hot Mess. The ramifications of the upcoming ruling in February are exceptionally significant to investors, financial institutions, and emerging markets alike.

While the court case is NML Capital vs. Argentina, the court has permitted the additional parties listed below to present arguments in support of Argentina’s appeal.  Each party will be represented by the listed legal heavyweight. 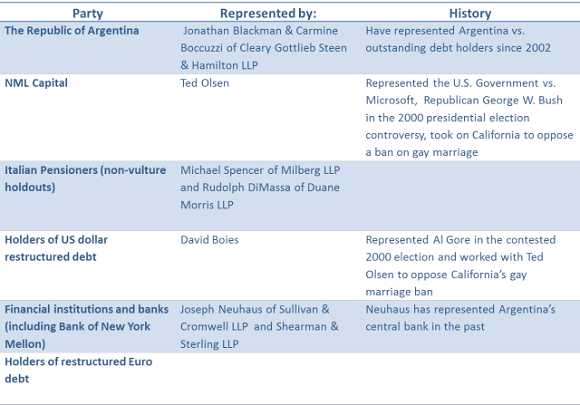 Singer has the right idea: seizing ships in Ghana is way more entertaining.

In addition to this case, third party financial institutions and holders of restructured debt are appealing to New York courts (as opposed to the Federal level) that this issue should be decided in New York rather than the court system it is currently in.