One of the pillars of the Japanese economy has been its exports. That pillar has been crumbling for years, but the deterioration this year has progressed at a phenomenal pace. At fault: China and Europe. But beyond the noise, Japanese companies have been investing their valuable yen overseas, and it’s making the deficit structural. An ugly combination.

In November, exports (¥4.98 trillion) dropped 4.1% from last year (customs report), while imports (¥5.94 trillion) rose 0.8%, for a total trade deficit of ¥953.4 billion. Through November, the cumulative trade deficit of ¥6.3 trillion, an all-time record, was 185% higher than during the same period last year! Largely due to a breathtaking collapse in exports to China and Europe. 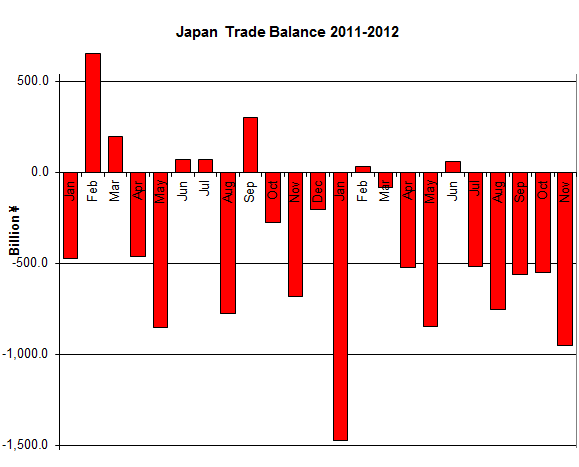 Exports to China (¥858.7 billion) skidded 14.5%, with construction materials plunging 75% and cars 68%. It was part of China’s well-orchestrated commercial and popular anti-Japanese response to the Senkaku Islands “dispute”—in quotes because Japan insists that there is no “dispute,” the islands being Japanese, period. By getting Chinese consumers and businesses riled up against Japanese brands, the Chinese government has exercised commercial revenge where it hurts Japan the most.

But that hasn’t kept the Japanese from buying Chinese products—an indication of just how much Japan has become dependent on them: imports (¥1,406.2 billion) were 5.8% higher than last year. The total deficit with China reached ¥547.5 billion. Not too long ago, Japan had a trade surplus with China.

Enthusiasm among Japanese businesses established in China has tapered off though: only 52.3% are now considering expanding operations in China over the next two years, a nosedive from 66.7% last year, according to a new survey. But 42% are planning on maintaining the status quo, up from 29%. And 5.7% would cut back operations, a smidgen above last year. No massive exodus. Just less enthusiasm for expansion. The last time that happened was in 2008 during the financial crisis; not a good omen. Cited reason: the tightening Chinese economy and the changing business environment, along with the impact of the Senkaku Islands imbroglio. The most serious managerial problem for Japanese companies in China? Rising wages!

While Japanese exports to China were awful, exports to Europe were catastrophic. It didn’t have anything to do with a temporary “dispute” of any kind, but with the real economy in Europe. If trade is any indication—and it is—economic activity in Europe is going downhill faster than other measures are leading us to believe.

Exports to Europe fell to ¥501.6 billion, down 20% from November 2011! Even to economic stalwart Germany, exports fell 14.1%; to France, which is getting deeper and deeper into trouble, they plummeted 25.5%, to Italy 29.3%, to Sweden 32.8%, to the UK (!) 34.4%…. That these countries have cut back their purchases to such an extraordinary extent is bad news for Japan—and an abysmal indicator for Europe.

However, exports to the US rose 5.3% to ¥933.8 billion, while imports from the US (indeed, there are still some!) fell 5.5% to ¥453.8 billion, for a trade surplus of ¥453.8 billion, a 19.8% jump. The Japanese are thanking their deities and spirits right now that American consumers are borrowing themselves into a hole again.

Beyond the screeching noise in China and Europe? Japan’s export debacle is becoming structural as companies have invested heavily overseas—and hugely so in China—to manufacture directly in their markets, rather than in Japan. US companies have perfected offshoring years ago. Japanese companies are perfecting it now. And the strong yen is making it more efficient still.

Unperturbed by reality, or rather high on the whiff of unlimited money-printing by the Bank of Japan and boundless deficit spending by the new government, the Nikkei rallied and broke through the 10,000 mark for the first time since April. There was hope too. The hope that fiscal irresponsibility driven to the extreme and central bank printing operations also driven to the extreme would slam the yen so that it might catch up in the race, instigated by the Fed, to the bottom.