The US government owes it, in no particular order, to the Saudis, US citizens, the Social Security Trust Fund, the Chinese, the Japanese, the Russians…. Below is the graph that depicts its growth from 1972 to 2012. Note the exponential increase since 2001. Also note the leveling off in 1998-2000. When Congress and the President want to, they can! But now, they don’t want to. 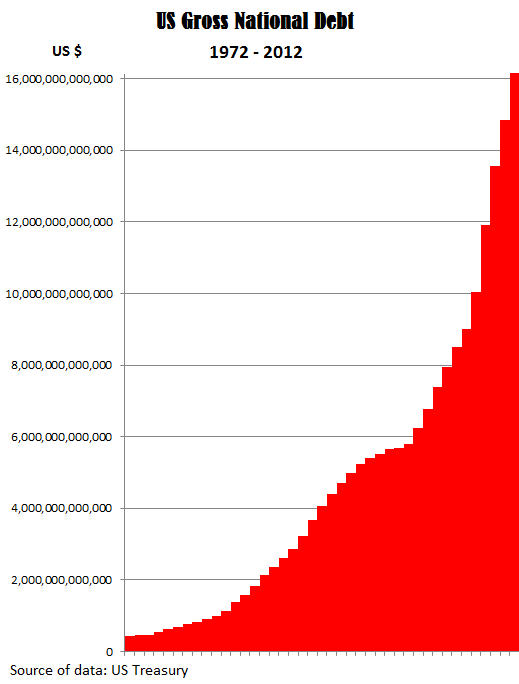 At $16.159 trillion, US National Debt is about 103% of GDP. By comparison, Spain, France, Germany, and most other Eurozone countries are below that level—and yet, they’re stuck in a debilitating debt crisis. Debt crises can only be solved or avoided by having a nearly balanced budget, by default, or by printing money and inviting its nasty sisters, inflation and devaluation. Those are the three choices the US has.

As a country, we have lived high on the hog and fought wars, funded by debt. That is, we’ve robbed our future.

Neither the Republicans nor the Democrats are promising the radical shifts in taxation and spending that would be required to fix this monster. Living within your means is painful after you’ve been on a borrowing binge. Many households have gone through that. It hurts. So no politician can expect to win an election by promising pain, however it may be distributed.

The beneficiaries of the current debt-binge are everywhere, from single moms on food stamps to the richest corporations, like GE or Boeing that haven’t paid income taxes thanks to our corporate tax code.

The hullabaloo about the “fiscal cliff” shows the nation’s attitude. As the automatic spending cuts and elimination of the Bush tax cuts are approaching, voices in the US, and in the rest of the world, are screaming at the top of their lungs to do something about it. Bringing the deficit down would be too painful! But even the dreaded “fiscal cliff,” if it were allowed to transpire, wouldn’t balance the budget, though it would make a step toward it, and it would slow the exponential growth of debt. It would be very painful, as households who’ve had to cut up their credit cards have experienced, but living within our means is painful. And it would be fiscally prudent. But it will never happen. So, a year from now, I will add another ugly data point to the graph.

CEOs believe the next six months are going to be tough; they’re reacting to it by slashing capital expenditures and jobs to “reflect global demand flattening out, particularly in Europe and China,” said Boeing CEO Jim McNerney. And they lambaste the fiscal cliff in a survey that evokes the dark days of 2009 and double-digit unemployment. Read…. The Miraculous Decoupling Of Reality, For Now.