Natural gas may well be the most mispriced commodity these days. Its price has been below the cost of production for so long that the industry is suffering serious consequences with billions of dollars in losses—dolled up as “non-cash accounting charges” as to be ignored by “analysts.” The more leveraged players are trying to keep their chin above water by selling priced assets.

There has been a mad scramble to abandon drilling for dry natural gas, and what little drilling still takes place is focused on wells that also produce oil or gaseous liquids. Countless wells have already been drilled and could produce but have not been brought on line due to pipeline constraints or local prices that have collapsed.

And yet, even that mayhem hasn’t been enough to push the price above the cost of production. But production is now finally tapering off from record highs on a week-to-week basis, though it’s still above last year’s level. Storage levels are high for this time of the year, but are rapidly regressing towards the mean due to soaring demand, driven by the hottest July on record and power generators that have switched from coal to gas due to price. But this is just noise as natural gas continues its relentless conquest.

It started in the 1990s when highly efficient natural gas combined-cycle (NGCC) turbines arrived on the scene. For the first time, gas was able to compete with coal on cost. By 2000, there was a building boom of NGCC plants underway that, over the next ten years, nearly doubled  the natural gas-fired generating capacity. And every one of these plants helped natural gas gain ground on coal.

And during the first six months of 2012, 165 power generators came on line with a total capacity of 8,098 megawatts (MW), but only one was a coal-fired plant. At 800 MW, it’s less than 10% of total capacity added. The remaining 90% were gas-fired generators and renewables, including solar and landfill gas, which tend to be small—hence the large number of generators.

Each wave is comprised of the oldest and most inefficient units. At the same time, the few coal-fired generators coming on line are much more efficient and burn significantly less coal than the capacity they’re replacing. A double whammy for coal demand.

And here is where the hapless retirees are: 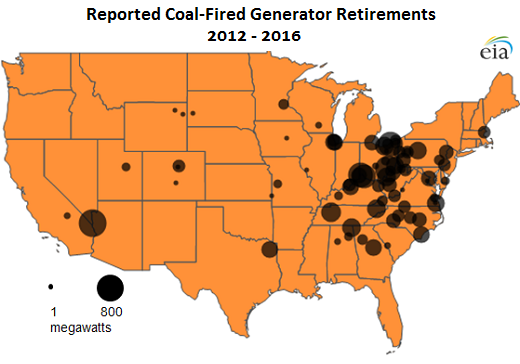 The reason: cost. More precisely, variable operating cost, an important factor in deciding which power generators to operate to satisfy a given demand. Generators with the lowest variable operating costs are dispatched first. Older inefficient coal plants are more expensive to operate than new coal plants—and more expensive than NGCC plants, even if the price of natural gas were higher. But there are other costs as well, such as complying with the Mercury and Air Toxics Standards. Smaller, older, inefficient units are not worth upgrading. And natural gas, being a cleaner-burning fuel, doesn’t have these issues.

Coal-fired plants are geezers: they were built during the halcyon days of King Coal before 1980. Back in 2010, 73% of the capacity was over 30 years old, while most gas-fired capacity was less than 10 years old.

Coal is a commodity whose demand in the US is being strangled powerplant by powerplant, and at an accelerating rate. Even a surge in the price of natural gas—and there will be one—will only fiddle with the numbers at the margins. A dire situation for coal in the US market (though exports might offer opportunities). Read… Natural Gas And The Brutal Dethroning of King Coal.