It’s been tough for natural gas drillers. The boom in horizontal drilling and hydraulic fracturing that gave access to enormous gas-rich shale formations around the nation led to record production. Prices crashed. Drilling activity collapsed: rig count, down 45% from last year, hit the lowest level since July 1999. Producers are writing down their natural gas assets by the billions of dollars. Some will get wiped out. The price of natural gas has been below production costs for years, and the damage is now huge.

On the other side, power generators have switched from coal to natural gas—with devastating impact on king coal. Coal has long been the dominant fuel for power generation. But April 2012, for the first time in the history of EIA data, power generation from coal-fired and natural gas-fired plants reached parity, each contributing 32% to total electricity generation. 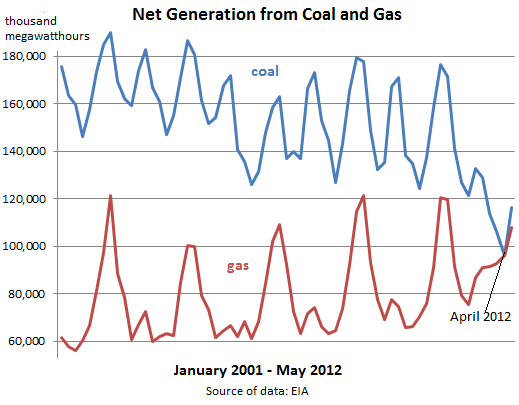 The large fluctuations are a function, in part, of the seasonality of overall power demand. In April, demand was low due to mild spring weather. The price of natural gas dropped to a 10-year low, and power companies laughed all the way to the bank. In May, power production started to rise as air conditioners got cranked up—a trend that will hold for the summer.

But the graph shows something far more important: a narrowing of the gap between coal and gas-fired power generation. It’s not just the low price of natural gas that did it—but a new power generation technology and yes, the usual suspect, Congress.

Gas turbines are an old technology. Most of the energy is wasted as exhaust heat. They’re inefficient, compared to coal-fired steam turbines. But they have an advantage: they can be brought on line quickly to cover peak loads. So coal and gas have been used in parallel: coal to produce low-cost base power and gas to produce more expensive peak power during periods of high demand (daytime, summer).

Gas didn’t pose a threat to king coal … until the arrival in the 1990s of the natural gas combined-cycle (NGCC) turbine: like the classic turbine, it drives a generator, but instead of blowing the “waste” heat out the exhaust, it uses the energy to generate steam that, as in a coal plant, drives a steam turbine that powers another generator. Like their old-fashioned brethren, NGCC plants can be brought on line quickly, but when used for base power, their efficiency can exceed 60%—much higher than that of a coal plant.

A game changer. With natural gas prices as low as they’ve been over the past years, operating costs for power generators have plunged. It doesn’t hurt that NGCC plants have lower capital costs than coal plants—$600 to $700 per kW versus $1,400 to $2,000 kW—relatively short construction times, and environmental benefits. The long-term shift to natural gas looks like this: 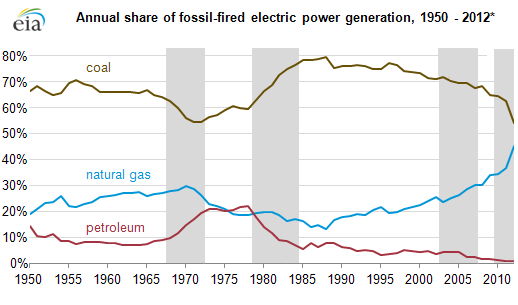 (The data is annual, not monthly; so 2012, with data through April, isn’t comparable to the first graph.)

The gray areas in the graph indicate periods of extraordinary changes. Low oil prices in the 1960s caused and uptick in use of petroleum for power generation … until the two oil shocks in the 1970s knocked it into a long decline towards the inconsequential.

The winner of the oil shocks was coal, producing at its peak in the late 1980s nearly 80% of all power: truly king coal. And it was Congress that did it! In 1978, in reaction to the oil price shocks, it passed the Powerplant and Industrial Fuels Act (PIFUA) that clamped down on the construction of oil and gas-fired plants and promoted the construction of coal plants. But by 1990, a new world had dawned: PIFUA was buried, natural gas markets were deregulated, and power generators were freer to substitute one fuel for another, based on economic considerations.

Just then, the efficient NGCC plants arrived on the scene! Result: a phenomenal ascent of natural gas in power generation, not only for peak power but also for base power, led by a construction boom of NGCC plants. Between 2000 and 2010, natural gas generating capacity jumped by 96%: 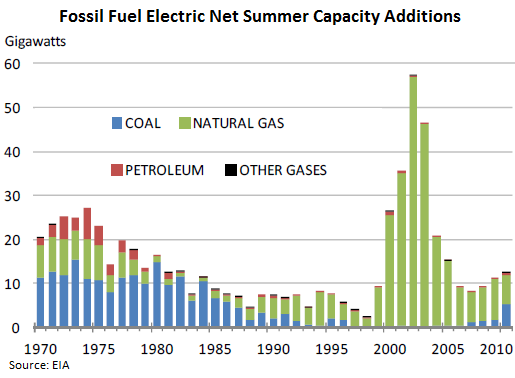 The loser was coal. An ugly slide that accelerated over the last few years. Higher natural gas prices—a certainty, given that they’re currently below production costs—will have some impact on the speed of the progression of natural gas. In the short term, power generators switch between fuels to take advantage of lower costs here and there. But as more gas-fired plants have come on line, and as the oldest, most inefficient coal plants are being retired, the shift to natural gas has become structural—pushing up demand inexorably.