Good news first. Despite the financial crisis, the Eurozone debt crisis, the housing collapse, the endless series of taxpayer-funded or central-bank-engineered bailouts, and despite various bubbles inflating or blowing up, worldwide beer production has increased year after year. In 2011, it rose by another 60 million hectoliters to 1.9 billion hectoliters (1 hectoliter = 26.418 US gallons), and was a very respectable 38.3% higher than in 2000, according to the annual beer and hops report by Barth-Haas Group. 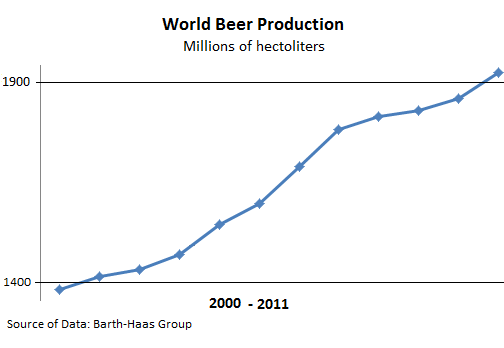 The bad news was regional. In most developed countries, production dropped. In the US, it edged down 1.6% last year and 5.7% since 1990—despite a significant increase in the population. In Germany, it stabilized recently, but had plunged 20.5% since 1990. Production in the UK had skidded 27.5% during that time, though it ticked up last year. No glimmer of hope for Japan: production is down 14.7% since 1990, and down 3.6% from 2010, the seventh straight year of declines. Only 442.39 million cases were shipped, the lowest ever in recorded Japanese beer history.

But Asia was on a tear. Well, except Japan. And India, the only major country that hasn’t yet discovered a taste for beer. The driver in worldwide beer production growth was China, up 9.3% in 2011, and up an astonishing 600% since 1990. Of the 60 million hectoliters in growth worldwide last year, 42 million where brewed in China. Vietnam made huge strides; in percentage terms a 2,680% melt-up since 1990. Beer production also grew in Africa and Latin America.

Russia is a special case: in the Soviet Union in 1990, beer production was zero (the chart below shows the percentage increase since 2000). By the time I went to Russia in 1996, Russian beers and Heineken were available, but hard to find in smaller towns or on trains, though vodka (served in water glasses or by the bottle) was everywhere. Since then, Russia has shot up to third place in beer production, knocking off Germany and a slew of other countries, only to get itself knocked off by Brazil last year. Production tapered off, not because of a decline in per-capita consumption—it’s still increasing despite a government crackdown on alcohol consumption—but because imports are making some headway. 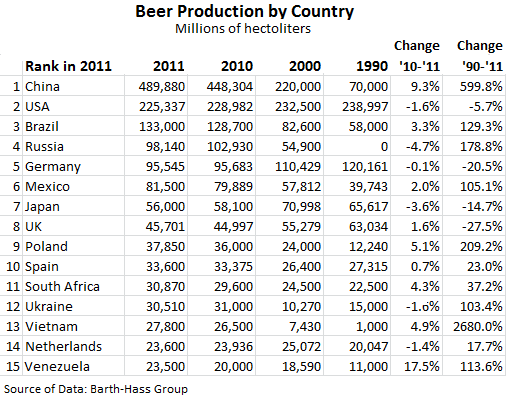 When I was a kid in Germany, I engaged in what in the US would be considered underage drinking. I was too young to drive, and so it didn’t bother anyone, except me the next day. It was the time when German beer consumption peaked at 151 liters per capita, the highest in the world. But then I went to America … and German beer consumption began a multi-decade decline that may finally be leveling off at 107 liters per capita. Enough for a second place in 2010, but not in 2011, when Austria knocked Germany down to third place.

Within any country, there are regional differences. But they’re particularly strong in Germany. Bavarians are still swilling it at a rate of 155 liters per capita, whereas Germany’s wine regions are down to 69 liters, an outright scandal. My grandfather, who was born and raised in the Kingdom of Bohemia, which was part of the Austrian Empire at the time, and is now part of the Czech Republic, would turn over in his grave.

Today, the Czech Republic and Austria are the top two beer-drinking nations in the world with 143 and 108 liters per capita respectively. By comparison, in the US, we drink 75 liters per capita, on par with Russia.

Note the last country on the list: India. 2 liters per capita! Just imagine Asian beer production if India’s 1.2 billion people discover—unlikely as this may seem—just how good a cold one can be after a hard day at work, or with their favorite meals! 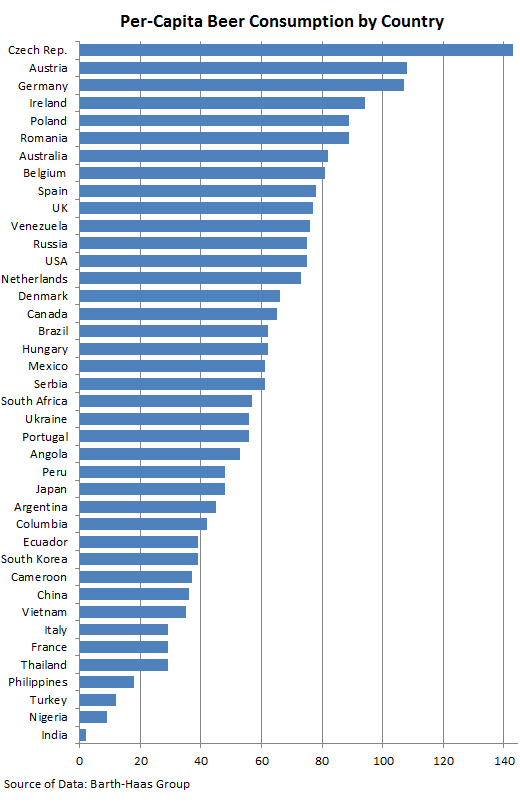 Every beer has a right to exist. Tastes vary, and one guy’s favorite brew is the next guy’s window sweat, as my uncle used to say. A while ago, I handed a California IPA, one of my favorites, to a friend of mine, who then told me that its flavor was reminiscent of rusty nails. So it goes. But in 2011, 51.8% of the world’s beer was produced by six mega-brewing groups. 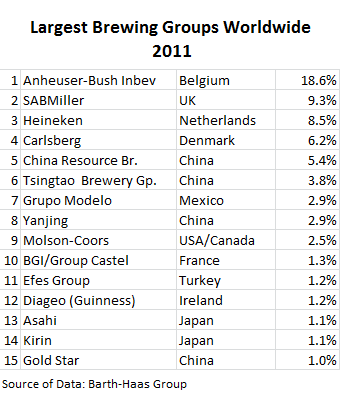 It’s getting worse: in June, ABInBev announced that it would acquire 7th ranked Grupo Modelo, giving the company a 21.5% share of the worldwide market. Without further acquisitions, the top six will brew 54.7% of all beer in 2012. But the more these mega-groups acquire each other, and the more they produce the same stuff, the easier it is for scrappy outfits with extraordinary beers to elbow their way into the market.

Germany still has about 1,250 breweries, a far cry from the many thousands it used to have. They range from brewpubs to mega breweries. About half of them are in Bavaria. And they sport about 5,000 brands, some of which are truly awesome, and those are doing well.

In the US, the industry has been more than morose, with mega-brewers battling each other tooth and nail over declining sales. And yet there are astonishing winners. Read…. The Beer War on American Soil.

7 comments for “Beer, A Reflection Of The World Economy?”