Disclosure: I’m biased. I love wine—almost as much as I love craft brews—but I’m leaning towards Californian wines; they’re awesome and grow in my extended neighborhood. More precisely, I love drinking wine, not keeping it locked up in a refrigerated vault, and certainly not investing in it. Hence, I have little sympathy for those who got the timing wrong when they bought high-dollar French wines for the sole purpose of investing in them, instead of drinking them, and I certainly don’t feel sorry for them in their plight. But a plight it is.

It all has to do, like so many things, with the China bubble, and central banks.

Wine as an asset class, if you will, didn’t do much until the China bubble got going seriously and rich Chinese began piling into the market: from the summer of 2005 through the Beijing Olympics in 2008, the asset class skyrocketed 152%. But then the world experienced the Lehman Moment, and from September to December that year, the asset class plunged 22.3%.

The fact that wine could fall off a cliff like this scared central bankers around the world, and they dusted off their printers, plugged them into their 440-volt outlets—these are big industrial machines, not desktop devices (see video link at the bottom)—and they started printing money to buy up assets of whatever kind, possibly even wines, which would explain their drunken stupor at the time. As all this freshly printed money out there was searching for a place to go, it created numerous bubbles, and revived others that had been gasping for air. Including the wine bubble. 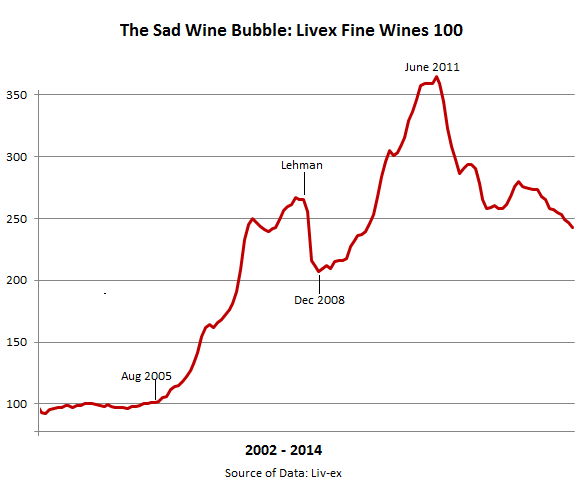 The Liv-ex Fine Wine 100, calculated monthly, is the “fine wine industry’s leading benchmark” and represents the price movement of 100 of the most sought-after wines, largely Bordeaux, “a reflection of the overall market,” but it also includes wines from Burgundy, the Rhone, Champagne, and Italy (but not from California). Now the index is back where it was just before the Lehman Moment, a 27.3% plunge. Thin mountain air appears to be all that’s underneath it.

The Liv-ex Fine Wines 50 tracks the daily price movement of the most heavily traded commodities in the fine wine market—the last ten vintages of the five Bordeaux First Growths, namely Haut Brion, Lafite, Latour, Margaux and Mouton. And it delineates the dynamics of the wine bubble in even more gruesome terms. 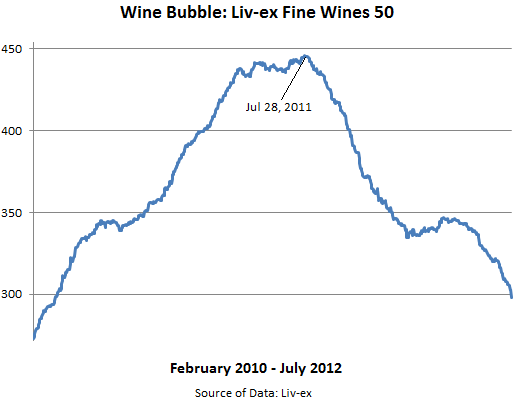 It powered up 63% from February 2010 (limit of data) to June 28, 2011, the peak of the bubble. By September it had dipped 8% – 10%, when Chinese bottom fishers jumped back in, smelling with their legendary accuracy a huge opportunity—and in such a manner that the LA Times reported:

The real clamor in China is for high-end French reds, which enjoy unparalleled cachet. A Chinese buyer spent an astonishing $540,000 in September on a single lot of 300 bottles of Chateau Lafite Rothschild at a Christie’s auction in Hong Kong.

Alas, he ended up grabbing a falling knife and getting his fingers sliced off. Based on the Liv-ex Fine Wine 50, he lost 27% so far. From its peak through Friday, the index plunged 33.1%; on Friday alone, our hapless Chinese investor lost 1.6%. But unlike stocks, you can always drink your asset and drown your sorrows.

And yet, drinking it is precisely what these investors fear the most because their investment might be … counterfeit. A “large industry issue,” particularly in China. Making money on fake fine wines is lucrative, and common. Methods range from refilling empty bottles of famous Bordeaux to sticking fake labels on cheap bottles. Less sophisticated Chinese consumers might not be able to tell the difference. And investors who keep their wines locked up rather than drink them? A devastating thought—and investors have lost confidence.

The industry is trying to combat this. Some wine makers implant NFC chips into their labels. When scanned with a smart phone, a website shows information about the wine and confirms its authenticity. Auction house Christie’s breaks its empty bottles with a hammer after wine tastings in Hong Kong and China so that they can’t be sold on the black market and refilled. But these measures might not be able to offset the double whammy of a pricked bubble and of counterfeit assets that are wreaking havoc on investor confidence—and on the value of their assets, fake or not.