“Ugly” doesn’t even describe it. I’m not talking about today’s ISM index of US Manufacturing, which was quite ugly, dropping to the worst level since 2009; and whose all-important New Orders sub-index was beyond ugly, plunging 12.3 percentage points, one of the worst dives in the history of the index. And I’m not talking about the JPMorgan Global Manufacturing PMI, which was truly ugly as it fell to its lowest level since June 2009. Those are volatile indices, and they might turn around on a dime, though that appears to be wishful thinking.

No, what “ugly” can’t describe is their relationship to the worldwide explosion of government deficit spending and central bank money-printing operations, ballyhooed for years and with deafening intensity as a powerful stimulant to the economy. They did goose certain markets around the globe—though not all, for example equity markets in China or certain European countries. And they did prop up economies around the globe, but only briefly and unevenly, producing an ongoing four-year recession in Greece, mediocre results in the US, and stellar results in China and Germany.

Since the onset of the financial crisis, central banks have forced yields on high-quality debt, such as US Treasuries, to near zero—and often below the rate of inflation. And they have printed voluminously to buy assets that are now decomposing on their balance sheets: $18 trillion “and counting,” or “roughly 30% of global GDP,” is now weighing down these balance sheets, according the Bank for International Settlements. A huge monetary stimulus. 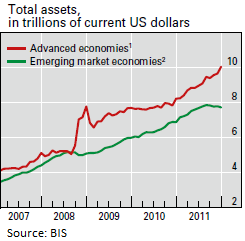 And fiscal stimulus—that is, deficit spending—around the globe took on mind-boggling proportions. At the very top is Japan, whose fiscal quagmire has no peers among developed nations: by March 2013, the end of the fiscal year, gross national debt will surpass $14 trillion, or 240% of GDP. Of its fiscal 2012 outlays, 56% will have to be borrowed. In the US, budget deficits have been ballooning for a decade, driving up gross national debt from $5.75 trillion in January 2000 to $8.68 trillion in December 2006, just before the financial crisis oozed to the surface. Then, all heck broke loose in Congress, and it opened the spigots all the way, and by December 2012, gross national debt will have nearly doubled to well over $16 trillion. It’s already over 100% of GDP. China also dumped stimulus on its economy, and so did Europe, despite the debt crisis festering on its margins, and despite “austerity” which continues to produce hefty deficits.

But now the party appears to be over. The economies have burned through these trillions and have misallocated or squandered them, and what’s left are mountains of public debt everywhere, a debt crisis in the Eurozone, and central banks with balance sheets that are stuffed with reeking assets they’d bought with the money they’d printed. I have previously written about the effects of the Fed’s policies on housing and the broad employment picture, but now, the JPMorgan Global Manufacturing PMI shows the combined economic impact of worldwide central bank operations and record government deficit spending on a big part of the real economy:

While the global PMI fell to 48.9 (below 50 indicates contraction), the lowest point since June 2009, and while Output fell to 49.3, it is the New Orders sub-index that took the biggest hit, plunging from 51.5 to 47.8—reflecting the historic nosedive of new orders in the ISM index of US Manufacturing. A cruel harbinger of things to come over the next few months.

The Eurozone was a key contributor to the decline. Even stalwart Germany is now heading south. But the debt crisis with its ups and downs and plot twists and happy endings that turn out to be the opening lines to the next installment has taken some of the focus off worldwide economic data as it’s being released country by country like Chinese water torture. But the global PMI confirms the relentless stream of disparate data: major economies around the world have been slowing, including the US, China, and Japan….

Despite the mind-boggling amounts of “stimulus” provided by governments and central banks alike! So the question arises, if this stimulus bought only such small amounts of growth for such a short time, on such an uneven basis, what will happen when the next slowdown cascades around the world—and stimulus as we’re now seeing, no longer works even in the short term?

Debt from that stimulus is greater than ever and growing daily, and central bank balance sheets are overflowing with muck. Any additional stimulus will only add to them. While it still might goose the markets briefly, its impact on the real economy appears to be negative over the longer term, and more of the same will accomplish nothing—other than leaving behind the mountainous detritus of failed policies.