“I believe, no,” is how Italian Prime Minister Mario Monti answered the question if Italy would seek a bailout—lacking the bravado and vehemence with which Spanish Prime Minister Mariano Rajoy had claimed for the longest time that Spain wouldn’t need one. Until it needed one. The question was hot. It followed the kerfuffle that ensued when Austrian Finance Minister Maria Fekter had let it slip Monday that Italy, given the high rates it has to pay on its debt, might also need “support.”

Monti was addressing restive German taxpayers on Bavarian public radio: He understood that Germans were looking at Italy as “a merry and undisciplined country,” but Italy was much more disciplined than other countries, he said, and wasn’t all that merry.

Italy is paying twice, he said: for the bailouts of other countries and very high rates for its own sovereign debt. Germany pays only once, namely for the bailouts, because it pays practically no interest on its debt. But he promised his German listeners: “The budget deficit this year will be low, only 2%.” And next year, a surplus is scheduled. “The country is changing,” he said.

A full-fledged bailout of Italy is a theoretical construct, anyway. As the third largest economy in the Eurozone, it’s too big to get bailed out by the Eurozone. Of the 17 member states, five, if Cyprus is included, are already being bailed out. Leaves 12, including teetering Italy, to pay for them. If Italy falls, the two major countries left standing to bail all of them out would be Germany and France. An impossibility. 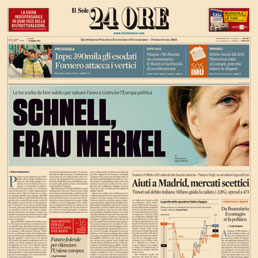 “Hurry up, Ms. Merkel,” an open letter to German Chancellor Angela Merkel, was a plea to do what it would take to save Italy—and thus the Eurozone. “Great Germany is losing its sense of history … and solidarity with European partners,” the article admonished, despite the hundreds of billions of euros that German taxpayers already committed to the bailouts. It called for immediate action, which would be in Germany’s own interest, and had “at least three” demands:

1. European-wide deposit insurance. Problem: it doesn’t exist yet, and no bank has paid into the fund; thus, it would be taxpayers, particularly Merkel’s voters, who’d have to transfer their wealth to bail out banks and depositors in other countries.

2. Give banks direct access to the bailout fund EFSF.  Problem: it was sold to voters as a bailout mechanism for countries, not corporations.

3. Unification of bond yields via Eurobonds. Cost of borrowing would be the same for all countries, raising it for Germany and France, and lowering it for Spain and Italy. A bit “more complicated” to implement, it would require constitutional reforms of all countries as they would give up part of their national sovereignty. A “European constitution” would have to seal it. “Leaders in every country, including France and Germany, must have the strength to convince their electorates of the short- and medium-term benefits.”

And it threatened Germany with economic demise, having learned how to do that from Greece: “Germany cannot maintain its health and strength amid the debris of small and large European countries.” Wondrous benefits, on the other hand, would emerge from a political and fiscal union—run by bureaucrats in Brussels, I presume: Europe would suddenly become “a fierce competitor” that would be able to “ensure income and jobs for a new generation.” If not, “you”—that’s Ms. Merkel—“would be overwhelmed by a spiral of defensive interventions that jump from one country to the next.” And it concluded, “It’s clear to everyone that the United States of Europe is a reality…. Faccia presto, signora Merkel.”

It would be a debt and transfer union. Debt would be transferred into one direction and wealth into the other—unless strict controls were instituted. If countries were to guarantee the debt of other countries, guarantors would have to be able to control how much can be borrowed; or else, Greece for example, could borrow cheaply and without limit while someone else would ultimately have to pay off its debt. So, any kind of common debt, be it Eurobonds or other instruments, would require a supra-national entity that decides to what extent a country is allowed to borrow.

Once the budget is in deficit, elected national representatives would lose their ability to fund infrastructure projects, boondoggles, subsidies, corporate handouts, wars … a fundamental democratic activity, messy as it can be. Instead, they’d have to go begging to the board of bureaucrats who speak different languages and hail from different countries. That board would wield enormous power over each country as it decides what gets funded and what doesn’t, based on whim or political persuasion. National politicians do that too, but they’re part of the country and have to run for reelection.

The US had hundreds of years and a civil war to figure out how to manage its common good. The Eurozone is a group of 17 independent nations with ancient cultures. Uniting them into a federal arrangement will take decades, if it’s even possible. But the debt crisis is here now. Italy is running out of options. Spain is hopelessly in trouble. Greece has hit the wall. And turning that fiasco overnight into a healthy United States of Europe is an illusion.

2 comments for “Italy Trembling on the Brink”