Since the lousy jobs report, there has been a veritable orgy of Fed Speak with juicy morsels and contradictions, interspersed with leaks and rumors, that climaxed today with Chairman Ben Bernanke’s words of wisdom before the Congressional Joint Economic Committee. It whipped markets into a frenzy, drove the Dow up 500 points, knocked yields into historic basements, and caused gold, the safe-haven investment, to bounce up and down like a rubber ball. All this was peppered with the impending collapse and bailout of Spanish banks and an endless litany of other problems in the Eurozone whose miasma is drifting across the Atlantic and might infect the presidential campaign.

Yet Bernanke wasn’t totally gung-ho about more Quantitative Easing. The “economy must be monitored closely,” he said instead of promising the immediate restart of the printing press. On Tuesday, it was Richard Fisher, President of the Dallas Fed, who came out swinging against more quantitative easing despite the “hue and cry of financial markets.” He blamed the federal government for lack of direction in its tax and spending policies that leave businesses mired in uncertainty. The same day, James Bullard, President of the St. Louis Fed, didn’t think the jobs situation and the broader economy was bad enough for the Fed to pile into another round of ineffectual QE—maybe they were trying to stay out of a political minefield.

On Wednesday, Vice Chair Janet Yellen took the opposite tack. Citing the still dismal job market, she pushed for more QE and more interest rate manipulation for an even longer period, probably for all times to come—ironically because the job market is precisely the market that has not recovered since the Fed started its QE programs and zero-interest-rate policy (ZIRP) in December 2008, along with its massive corporate and bank bailouts.

The effect of the Fed’s policies on the job market can best be seen through the Employment-Population ratio, which measures the percentage of people age 16 and older who have jobs. It’s not perfect. But it’s the least corrupted employment number out there: it’s not seasonally adjusted, manipulated by the infamous “Birth Death Adjustment,” or mucked up in other ways. After peaking in April 2000 at 64.7%, it now hovers near its 30-year low—despite, or because of, the Fed’s policies: 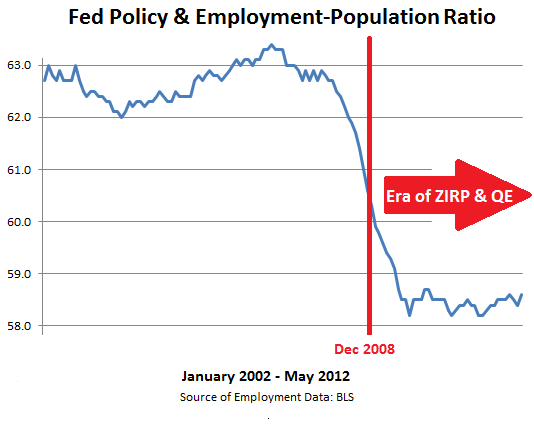 So, how can anyone still couch the justification for QE and ZIRP in the fatuous language of job creation? The Fed employs an army of number-crunchers who know all this. Yellen and Bernanke also know that the impact of QE and ZIRP on jobs has been nil, or even a negative.

However, QE and ZIRP have had a colossal impact, and not just on the financial markets and the status-quo banking system that caused the financial crisis, and on capitalism and free markets as a whole, which no longer exist, but also on the real economy.

A friend of mine is a partner at a restructuring firm. Their specialty was to take companies that were cratering and restructure them back to health. Typically, they were paid by creditors that had ended up with these companies. But a couple of years ago, his firm had to reinvent itself. With boundless amounts of money floating through the system, and with yields being so low, creditors had become enamored with “extend and pretend” where, instead of recognizing losses on these defunct loans, they would simply offer forbearance agreements, issue new loans, and pretend everything was fine.

These companies are still out there, un-restructured, burdened with even more debt. The rejuvenation and cleansing process that debt-fueled capitalism needs from time to time to get rid of management deadwood, too much debt, and other problems, and that wipes out equity holders and makes creditors come to grips with reality, has not taken placet—though millions of workers have been axed. The energy and job growth that would normally sprout from the ashes have mostly faltered. And my friend, to stay relevant, became an expert in performance improvement to help entrenched management stay in place.

While preventing the economy from going through its necessary cleansing process—and the heavy losses associated with it—the Fed’s policies have in spectacular fashion enabled Congress to run up gargantuan deficits year after year that make the Eurozone, now ravaged by a debt crisis, look virtuous. Sen. Jim DeMint, a South Carolina Republican, tried to politely nudge Chairman Bernanke on that, but he shrugged it off. And Congress will once again shrug off Bernanke’s suggestion that it needs to come up, as he said, with a “sustainable” deficit—a term that has replaced the concept of “balanced budget.”