The ugly jobs report gave Mitt Romney’s campaign what it had been waiting for: a huge boost. And they’re out making hay. Romney called it “devastating news for American workers and American families.” An army of Republican talking heads swarmed over the land and pummeled President Obama with the jobs report. And just as Republicans see victory edge closer, shrill voices are now calling for the Fed to launch the next round of quantitative easing.

On Thursday, Romney, in California to rake in the big bucks with a series of high-dollar fundraisers, took some time out for a news conference in Fremont, in front of a weedy property dominated by a shuttered office building. Parched hills in the background. “Solyndra” a sign said. The company isn’t famous for its special thin-film solar cells that proved to be uncompetitive, but for the scandal surrounding the $535 million in federal loan guarantees it had received as part of the stimulus package. It was one of the ballyhooed “green tech” outfits that were going to revolutionize the American industrial scene, create gazillions of “green jobs,” and conquer the world.

“A symbol of a serious conflict of interest,” Romney called it as he recapped the sordid affair, one of the worst debacles, though not the only one, of the stimulus bonanza, which, if I recall correctly, had been a bipartisan concoction. When Solyndra went bankrupt, taxpayers had to pay off the loans that the government had guaranteed. The promised green jobs remained elusive.

And there certainly weren’t any signs of them in the jobs report (BLS PDF). Instead of the 165,000 jobs that the Wall Street hype machine had proffered, a mere 69,000 jobs were created in May—corroborating recent data of a wobbly economy. And worse: the April number was whacked down from the original and already disappointing 115,000 to 77,000 and the March number was trimmed from 154,000 to 143,000. The recent trend looks awful: 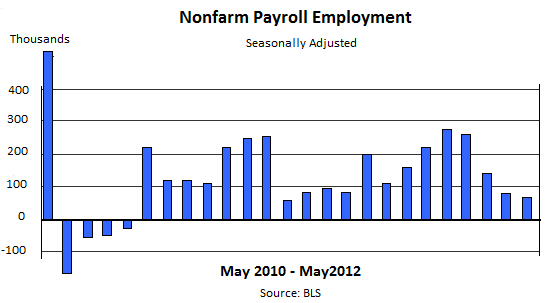 The headline unemployment rate ticked up a notch to 8.2%, and U-6, the broadest measure that includes the underemployed and those marginally attached to the labor force, ticked up three notches to 14.8%. While the Employment-Population Ratio improved a smidgen to 58.6%, it depicts better than anything else the tragedy of the American employment scene. 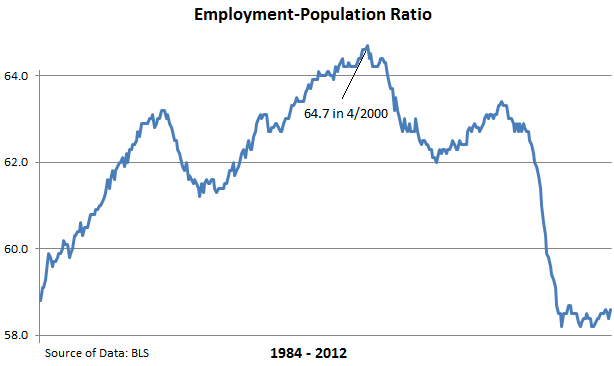 After World War II until 1975, the Employment-Population Ratio bounced between 55% and 58%. As women entered the workforce in greater numbers, it edged up; and after the recession of 1983, it went on a bull run that peaked in April 2000 at 64.7%. Then it declined. Whatever the reason. Outsourcing, innovation, off-shoring, tax laws, technological progress, corporate shortsightedness, cheaper labor elsewhere. When the housing and construction bubble took off in 2004, it recovered a bit, but in 2006, it all fell apart. Since the jobs crash of the Great Recession, the ratio has remained close to the lows last seen in 1984.

And this, despite years of gyrations by the Fed as it printed trillions of dollars and inflicted its zero-interest-rate policy on savers, bondholders, and pension funds, thus creating an era of financial repression where investing in relatively safe instruments produces a guaranteed loss after inflation. These policies have led to capital misallocation and outright capital destruction.

The policies have also created epic bubbles in bonds and commodities, plenty of inflation for the middle class, and an enormous amount of wealth for those who benefitted from them … but alas, they haven’t created a lot of jobs.

As Romney is trying to use the deteriorating jobs picture as a crowbar to dislodge Obama from the Oval Office, an opposing effort is gaining momentum: getting the Fed to open up the spigot and flood Wall Street with money. On Thursday, Boston Fed President Eric Rosengren spelled out the Fed’s options, from extending Operation Twist to purchasing mortgaged backed securities. So the yield on the 10-year Treasury note plunged to 1.46%, unthinkably low not long ago. Japan comes to mind. But QE3, even in modest form, would be perceived as helping Obama cling to his job. And this would put the Fed on collision course with every Republican. Interesting times.