We finally have statistical proof that CEOs are … a confusing bunch. The just released survey by PWC International shows that CEOs in 60 countries are exhibiting signs of gloom about the economy but not their own companies. German CEOs, who are facing the Eurozone debt crisis on a daily basis, aren’t feeling the pain, according to Ifo’s indices. The New York Fed’s Empire State Manufacturing Survey points at spiking optimism. And all three show patterns of false hope.

PricewaterhouseCoopers International asked 1,258 CEOs in 60 countries during the fourth quarter last year about their outlook on the global economy. The results weren’t pretty: 48% expected it to decline, 34% expected it to stagnate, and only 15% expected it to grow.

But when asked about revenue at their own company, they were much more optimistic: 40% were “very confident,” that they could achieve revenue growth. The graph, which compares all CEOs to CEOs in Germany and the US, illustrates just how much of their revenue-growth optimism German CEOs have surrendered in 2011. And how much of it still remains. 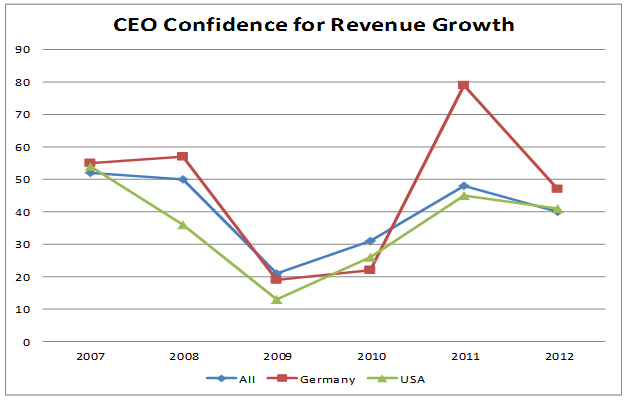 The dilemma: only 15% of all CEOs believed the economy would grow. Yet 40% were “very confident,” that their own companies would grow—on the principle that the economy might go to hell in a hand basket, but “my” company is going to do just fine. A case of false hope.

And these CEOs are lagging indicators. Their forward-looking confidence bottomed out for the year 2009, though the low point of the crisis was late 2008 and early 2009, after which sales began to recover on a global basis. And German CEOs lived in a fantasy world in late 2007. On the cusp of the worst two quarters in the history of the Federal Republic—while the US economy was already slithering into a financial crisis of historic proportions—German CEOs were brimming with optimism. The logic: it was a US subprime problem, and Europe would “decouple.”

The Ifo Business Climate index also shows how optimistic German CEOs were in early 2008, as the financial crisis was spreading—though they’d come down some from their euphoric levels in 2006. The forward-looking expectation index bottomed out in December 2008, in the middle of two horrible quarters. Then it recovered along with the astounding export boom Germany experienced after that. However, it does lead the business climate index by a few months.

Maximum euphoria: the expectation index hit 110.7 in December 2010, and the business climate index hit 115.2 in February 2011, the highest levels in the history of the index—despite the debt crisis raging in the Eurozone. Germany’s economy grew nicely during the first three quarters of 2011 but turned south in the fourth quarter. Yet, for those three months, the expectation and climate indices actually increased—the small hook at the bottom. Remains to be seen if the Ifo correctly predicted an upturn or once again printed out false hope on the cusp of a major downturn—and there is a pile of evidence that it’s going to be the latter.

The Empire State Manufacturing Survey also dives into CEO optimism. It measures changes in current business conditions (reality) and the likely direction of the same conditions in six months (expectation). The graph below overlays both trend lines.

Data goes back to July 2001. During the entire time, only once, in September 2001, did expectations drop below current conditions, but only for the briefest period, and only because of a horrid terrorist attack.

Since then, expectations have always been rosier than reality. The gap between them is false hope. Regardless of how bad reality is at the time for these executives and their industries, or how steep the decline, they have a rosier outlook for the future. Most of the time, reality never gets as good as their outlook assumed, and often, as the graph shows, it gets a lot worse.

Now optimism for this summer spiked. But much of it will once again turn out to be false hope. Or is it different this time? Supercar enthusiasts went into a tizzy when Honda announced that it would bring its Acura NSX back to life. Design and manufacturing would be shifted to the US. And much of the production would be exported. It would be a technology showcase. And possibly a precursor of something big.