According to last week’s GDP number, the economy has been growing supposedly at a rate of 2.5% in the third quarter—and economists are busy ratcheting up their growth forecasts for the fourth quarter, thanks largely to the inexplicable American consumer, the toughest creature out there that no one has been able to beat down yet. But there are some pernicious trends and unpleasant zigzags that point the opposite way.

The Chicago PMI, which was released yesterday, offered some clues about business conditions in the Chicago area: it dropped to 58.9%, though it’s still in growth mode (50% = flat). Its employment index ticked up a bit, but ominously, new orders dropped. The three-month moving average has been going south for seven straight months.

International air freight volumes in September fell 2.7% from a year ago, after a decline of 2.4% in August, down for the fifth consecutive month. Volumes are now 5% below the volumes at the end of the first quarter, according to the IATA. Freight volumes at Asia-Pacific carriers got hit the worst, down 6.3% from September last year. Tony Tyler, IATA’s CEO in Geneva, put it this way, “This trend is in line with falling business and consumer confidence.”

Today’s ISM manufacturing index dropped to 50.8, a hairline away from dipping into contraction (50 = flat). After hitting a twelve-month high of 61.4 in February, it has essentially crashed.

Construction spending in September ticked up a minuscule .2% (lower than the margin of error of ±1.8%) but fell 1.3% from September last year. There is no room for hope at these dismally low levels: residential construction in September hovered at $228 billion on a seasonally adjusted annual rate, down a whopping 66% from its peak in January 2006.

The Restaurant Index, another fun indicator to keep your eyes on, increased 0.7% in September to 100.1 (100 = flat). From its recent peak of 101 in the spring, it zigzagged down and broke through the flat line in July and August. So September was a mini recovery, apparently within a downward trend. By comparison, over the last decade, it peaked at 103.5 in early 2004 and bottomed out in the trough of the recession at 96.5.

In another boost for the economy—the Chinese economy, that is—and just in time for the holiday season: fake iPads. They’re massively invading online retail sites. MarkMonitor found over 23,000 listings for iPads and Android-based tablets that were either clones, counterfeits, or gray market items from fifteen manufacturers—mostly in China. Of the 8,000 sellers, 766 were dealing in bulk quantities. Some listings were more deceptive than others. So watch out when you do your holiday shopping. And don’t expect any help from the government. Preventing counterfeit products from entering the United States isn’t high on the congressional priority list.

And if that weren’t enough: no, this graph doesn’t depict wages, retail sales, and jobs… 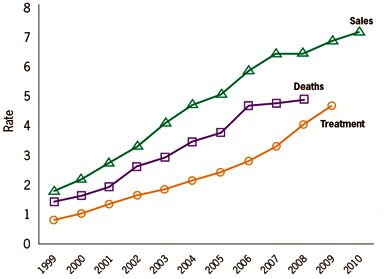 …but prescription painkiller sales, deaths from overdoses, and substance abuse treatment admissions from 1999 to 2010.

And what’s the price tag? “Non-medical” use of painkillers cost health insurers $72 billion annually, the CDC said. Now there is a way to cut healthcare expenses. And what’s really scary is that the death rate doesn’t yet include the years since the economy cratered.