“We have to evolve our business model,” said Masatoshi Kumagai, one of the bosses of the Inagawa-kai syndicate of the Japanese yakuza, in an interview with reporters of the French magazine L’Expansion. In the media, yakuza are portrayed as getting stronger and richer, but the opposite is actually true, he said. They’re on decline, and if they don’t change their business model, they might cease to exist.

Yakuza are an economic force in Japan with over 100,000 members in 22 syndicates, grouped into three families. An ambiguous relationship between them and the government contributed to their prosperity. After World War II, the government used the yakuza to fight Chinese and Korean gangs rampaging in the country. In the 60s, with the encouragement of the Liberal Democratic Party (LDP) that ran Japan essentially from 1955 to 2009, yakuza broke up massive strikes. As the relationship solidified, their influence spread: Rackets, pachinko, drug trafficking, consumer loans, prostitution—and they got rich. They showed up at parties of the jet-set and threw around money and had so much power that even the anti-gang law, passed in 1992 to control their influence and visibility, wasn’t put into effect until six years later. 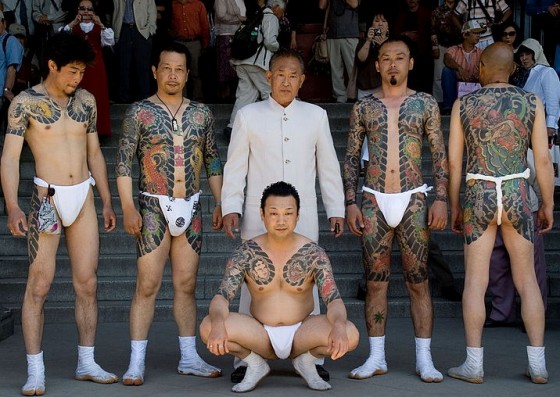 Yakuza show off their status at the Sanja Matsuri festival, in Senso-ji shrine in Asakusa, Tokyo

The slow and lacking response by the government to the horrible earthquake in Kobe in 1995 didn’t help. Yakuza swooped in, even using a helicopter, and provided disaster relief while the authorities were dillydallying around. This was played up in the media and added to their aura of semi-legitimacy.

But when a yakuza assassinated the Mayor of Nagasaki, Iccho Ito, in 2007 outside his campaign office, everything changed. Considered an attack against democracy, the assassination caused the government to declare war on the yakuza. And crackdowns began. Then the financial crisis hit, and the LDP was losing its grip on power. In a desperate effort to prop up its popularity, it cracked down even harder.

As a consequence, said Masatoshi Kumagai, yakuza are weakened by repression and can no longer run their businesses as they see fit. The protection racket, for example. If caught by police, a shopkeeper can get in trouble for cooperation with a criminal enterprise. Same thing in construction, which used to be dominated by yakuza. Their influence is diminishing, and they have to make themselves more and more invisible. While there remain some big business opportunities, like drug trafficking, they don’t make as much money as before. And what you read in the media about their profits, he said, is exaggerated.

Even in finance, they’re weakened. For a long time, they flourished with insider trading because they got the information before anyone else. That’s no longer the case. As the recent scandals have shown, everybody engages in insider trading, and yakuza have lost their edge. In fact, he says, there is no longer any dividing line between the legal financial world and yakuza.

According to police estimates, already half of the revenues are derived from legal activities that were acquired or built up with illegal gains, such as construction, finance, and real estate. Many of these legal activities are performed by “associates” who are experts in finance, law, etc., but don’t have the signs of true yakuza, such as tattoos.

It’s time to look for a new business model, he said. Yakuza operate locally, but they need to expand overseas, which is hard because they’ve never tried to build relationships with other mafia organizations. Focused on Asia, he’s making deals in China and South Korea and recently invested in a casino in Macao. It’s difficult to do for a Japanese, he said, and he is the only Japanese so far who has been able to do it, thanks to his contacts in these countries.

“And we have to improve our image,” he said. The Japanese people and the government are no longer afraid of yakuza and might reject them entirely. It’s already difficult to recruit young talent. To join is less attractive for them than it was before, when they were showered with money, girls, and cars. Young people are different today. They no longer observe the rules. When they screw up, they run away (instead of cutting off part of a finger, wrapping it in cloth, and offering it to their boss as sign of contrition). “When we catch them and beat them up to put them back on the right track, they denounce us at the police,” he added. “We used to say ‘thank you’ at the end.”

And prison sentences have become longer, he lamented. Instead of 15 years, someone might get 30 years or life. Back in the day, yakuza were promised a higher position in the organization once they came out of prison. Today with the crisis, it’s no longer possible to promise that “when we don’t even know if we’ll still exist.”

The undergarment of the yakuza in the photo above? Tokyo Tidbit: Yakuza Undergarments