The horrific tsunami from the March 11 earthquake off the coast of Japan radiated out from the epicenter in every direction, raced 8,000 miles across the Pacific at 450 mph, dispersed as it went, and arrived 18 hours later at the Antarctic ice shelf. The leading wave was trailed by a wake of complex, spread-out wave patterns whose greatest amplitude by then was no more than a foot. Nevertheless, the up-and-down wave action that lasted for days caused the rigid ice shelf to crack, and large junks broke off.

These photos taken by Envisat of the European Space Agency (ESA) show the calving of icebergs from the Sulzberger Ice Shelf and their journey into the Ross Sea. 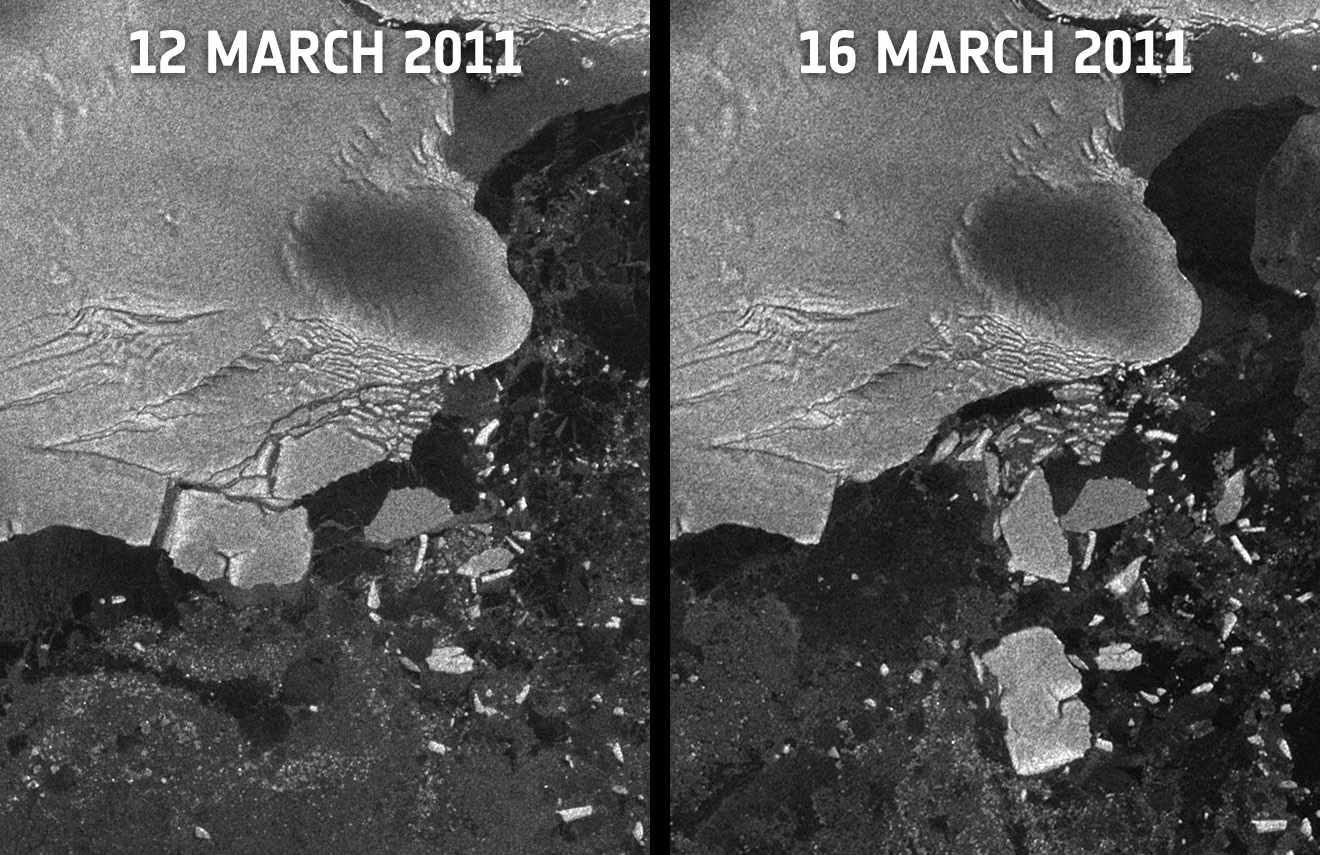 The largest iceberg on the photo measured four by six miles and was about 260 feet thick. In total, close to 50 square miles broke away. The images were taken by Envisat’s Advanced Synthetic Aperture Radar. Optical photos showed mostly cloud cover.

According to a study by an international team of researchers and NASA scientists published on August 8 in the Journal of Glaciology, the Envisat data provides the first observational confirmation that the Antarctic ice shelf is affected via ocean waves by events that are great distances away. Comparing satellite and aerial photos of the ice shelf going back to 1965, the scientists were able to prove that the ice shelf had been stable for the entire period. It was the arrival of the tsunami that triggered the calving of the icebergs.

However, two other factors played a major role:

—Rifts in the ice shelf. The largest icebergs were from deeply rifted sections of the ice shelf, and when the tsunami hit, the ice fractured along those rifts. The rifts had been known, and calving events had been expected for some time. The tsunami’s vibrational disturbances were simply the trigger.

—Timing, as always. Sea-ice was at a minimum, as is typical for the season, and in the waters north of the Sulzberger Ice Shelf, there was no fast ice or pack ice. Its presence would have dampened the wave action of a tsunami, but on March 12, the ice shelf itself had to absorb it all.

The most refreshing aspect of this study is that no one as of yet has tried to forge an artificial link to global warming, à la Al Gore.