Spain’s crisis is “in many ways over.” At least according to Mariano Rajoy, Spain’s disaster-prone Prime Minister. As for the country’s 5.5 million unemployed, the ordeal continues – in many ways. Indeed, so fierce was the ensuing backlash that Rajoy was forced to at least partially retract the offending phrase. “In many ways the crisis is history, but its consequences are not,” he clarified.

With a new political scandal erupting just about every other day and his party’s credibility at an all-time low, Spain’s fragile economic recovery is the only silver lining Rajoy’s government has left. Hence, every time a journalist brings up the government’s growing rap sheet, Rajoy’s knee-jerk response is straight out of the politician’s elementary handbook of distractionary methods.

“Look over there, a beautiful economy,” he seems to gush as his eyes glaze over dreamily and his mouth launches into a well-versed tale of economic happiness.

Like most good tales, the storyline contains a great deal more fiction than truth – demonstrated by two separate but closely linked data points. The first is a report by Eurostat on unemployment. Spain still has the second-highest unemployment rate in the EU, at 23.2% way worse than third-place Hungary (18.5%) but not quite as terrible as Greece (26%). That would be bad enough. But the report also shows that Spain is proud home to the five European regions with the worst levels of unemployment.

At the top of the medal positions is the southern province of Andalusia, currently sans government after recent regional elections returned a deeply divided hung parliament. It’s unemployment rate is closing in on a disastrous 35%! The next five worst regions are also in Spain. Even fifth place, Castilla-la Mancha, has an unemployment rate of 29%. In fact, six of the worst 10 regions in the EU are in Spain, the rest are in Greece. 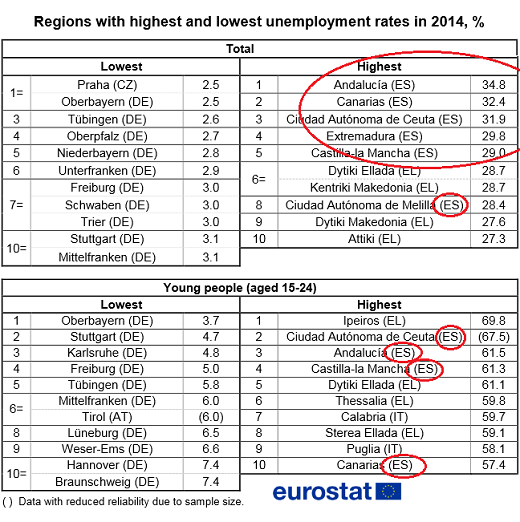 One must hand it to Rajoy: cornering the top five spots in this category is no mean feat, especially given the intense competition coming from Greece, a country on – or as its Finance Minister asserts, well over – the edge of Bankruptcy. Not satisfied with monopolizing the top five positions in the main category, Spain also out-performed on youth unemployment, picking up silver, bronze and fourth (with rates of between 61% and 67%).

Granted, unemployment was always the least credible aspect of Rajoy’s tale of economic bliss. Selling a happy ending to a nation wearily accustomed to a one-in-four rate of unemployment is beyond the skill set of even the darkest spin doctor. But in the last year or so, there were a few positive signs – what Rajoy loves to call “green shoots.”

According to the latest labor force survey Spain created 434,000 jobs in 2014. Admittedly, many of the new jobs are part-time (40% of new indefinite contracts are part-time) and most of the others are temporary and/or not well paid (the economy is increasingly becoming a low value added services one, led by tourism),. But still, Spain’s economy is creating employment, and that is good news.

Or at least it was.

According to the second dataset, provided by Spain’s Office of Statistics (INE), the economy destroyed 114,300 jobs in the first quarter of this year. While the ranks of unemployed fell by just over 13,000 people (always good news), the only reason for that decline is a shrinking active population (good news as long as no one notices).

The total number of unemployed rose to 5,444,600 people while the number of households with no official form of income rose by 27,300, to a staggering 1.79 million. Most ominously, almost all of the jobs that were destroyed in the last three months were in the private sector, while almost all of the new jobs (29,000) were in the public sector. This is a do-or-die election year for Rajoy; and so the government is hiring.

But this economic recovery is all Rajoy’s government has. And depression-level unemployment rates are just one flaw in the plot. What is rarely mentioned is that the recovery (or what I prefer to call remission) is owed to two primary, wholly unsustainable factors: Draghi’s never-ending magic money show and an unprecedented explosion in Spanish public debt that soared from 36.1% of GDP in 2008 to 97.7% of GDP now.

As the Catalonia-based economist Edward Hugh notes, the ECB is buying Spainish government bonds hand over fist, ECB interest rates are at record lows, and the country is running the largest fiscal deficit in the EU (in 2014, the public debt increased at a rate of €186 million per day). And with political instability on the rise throughout the old continent, but especially in Spain, it’s only a matter of time before complacency in Europe turns to fear, and fear to panic.

At that point the sturdiness of Rajoy’s economic miracle and the health of the country’s bailed-out, reorganized, and recapitalized (ha!) banking sector will be truly tested. One fears that both will be found extremely wanting. By Don Quijones, Raging Bull-Shit.