Two weeks ago, I told you I was buying stocks. The market was selling off hard. The S&P 500 fell 4% in seven trading days. Financial network talking heads were warning that the long-awaited correction had begun. Most traders were looking to short the market.

But the NYSE McClellan Oscillator (NYMO) – a measure of overbought and oversold conditions in the market – was saying stocks were primed for a bounce. I said it was a good time to make quick profits from the upside.

Today, the stock market has recovered – an outstanding 4% gain in just two weeks – and is within spitting distance of a new all-time high. Television talking heads are bullish again. Traders are rushing to get exposure on the long side of the market.

But now, the NYMO is saying stocks are ripe for a pullback. And that’s why I’m selling. Take a look at this updated chart of the NYMO: 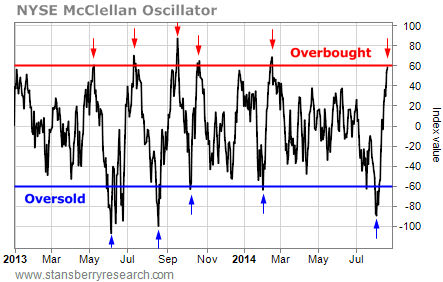 Readings above 60 signal overbought conditions and warn of an impending decline in the market. Readings below -60 point to oversold conditions and signal the potential for stocks to move higher.

With a reading around 60 today, the NYMO is telling us stocks are overbought. And that’s why I’m selling.

The NYMO has a terrific track record of signaling short-term reversals in stocks. You can see this in the chart below. It shows how previous “buy” signals (blue arrows) and “sell” signals (red arrows) have lined up with the S&P 500…

Likewise, the NYMO “sell” signals didn’t always mark an absolute short-term top in the stock market. But they always marked a good time to sell. Stocks were usually lower a few weeks later.

As I told you last week, I’m not interested in aggressively short selling the stock market just yet. But I am taking profits on the stocks I bought two weeks ago. I suggest traders who took my advice to buy do the same. By Jeff Clark, Growth Stock Wire

“Here’s when US equity and bond markets will change direction: when investors come to fear the next Fed-talk.” Read….. Money Manager’s Warning: ‘The Bull Move Has Lasted So Long Nobody Can See Its End’