There is nothing more predictable than the bevy of Wall Street economists who come charging out of the blocks early each year proclaiming that money printing by the Fed will finally work its magic, and that real GDP growth will hit “escape velocity.” But this year the markdowns have come fast and furious. After the disaster of Q1 and the limp data reported for Q2 to-date, the revised consensus outlook for 2014 at 1.7% is already below the tepid actual results of the last three years. So much for the year when “screaming” growth was certain to happen.

The graph demonstrates that Wall Street has become a pure Fed enabled casino. If honest “price discovery” was actually functioning, the stock market would not be at nosebleed heights, capitalizing hockey sticks that never materialize. Instead, it would be discounting a badly impaired economy that is stuck in a sub-2% rebound—and one that is dangerously at risk owing to the third and greatest financial bubble the Fed has created during this century. 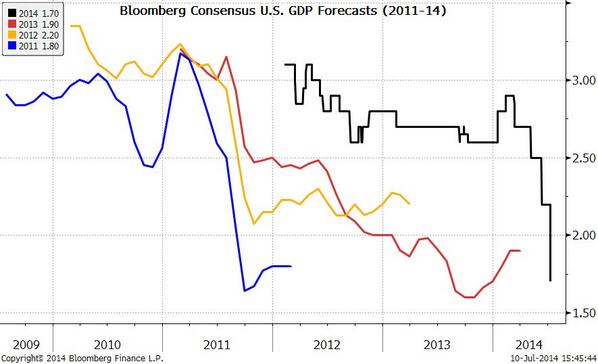 Senior bankers are “privately warning” that the record bank lending binge “should not be seen as evidence of an economic recovery.” Instead, they’re fretting about the greatest credit bubble in history.  Read….  Senior Bankers Warn: ‘It’s Crazy, It’s a Boom, It’s a Gold Rush’